Inflows via systematic investment plans remained strong but have consistently been declining for past several months.

Mutual funds continued to face redemption pressure for the second consecutive month in August as investors booked profit given the rally in equity market in the last few months.

Mutual funds saw net outflow of Rs 4,000 crore from equity and equity-related schemes in August against the outflow of Rs 2,489 crore in July, according to the official data.

Inflow via systematic investment plans (SIP) remained healthy but has been consistently declining for past several months. SIP inflows stood at Rs 7,791 crore in August against Rs 7,830 crore logged in the previous month.

"Over the last two or three months, investors have continued to book profits from equity mutual funds. While the SIP amount has dropped very nominally, once again there is a net addition of about 3.43 lakh SIP folios. It also appears that some investors have taken a tactical asset allocation call by moving from equity to low duration or ultra short term funds with the objective of re-entering equity funds at lower levels in the event of a correction in the markets," G Pradeepkumar CEO at Union AMC told Moneycontrol.

Mindspace Business Parks REIT was listed on August 7 after its Rs 4,500-crore initial public offering, which was subscribed 13 times during July 27-29.

On the other hand, the four stocks they exited are Macpower CNC Machines, NDR Auto Components, Novartis India and RSWM, according to Dolat Capital. 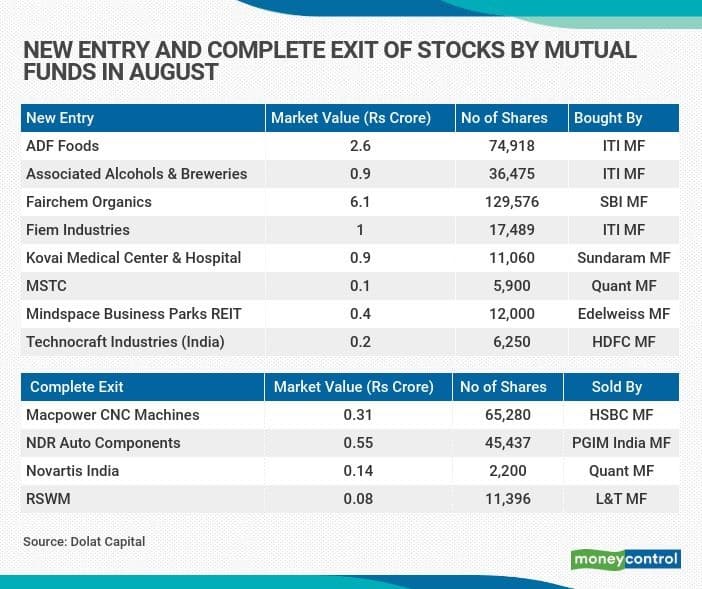 The Nifty50 gained for the third consecutive month, rising 2.84 percent, while Nifty Midcap 100 index was up 7.83 percent in August, backed by global liquidity and hope of strong earnings growth in FY22 along with progress on the vaccine front.