The market has been scaling fresh highs from last week, with the Nifty crossing 11,300-mark for the first time backed by select index heavyweights. "The rally is probably because of across the board reporting of positive earnings and change in body language of the management compared to the last six months. We have more legs to the market," Sridhar Sivaram, Investment Director at Enam Holdings, told CNBC-TV18.

On sectors, he said the loan waiver and fiscal stimulus, which are worth more than Rs 1 lakh crore, should provide a significant boost to the consumption space.

"More money has been going into the hands of people. This may be going to the consumption space and also driving demand in the market. For instance, fast food items are showing a 20 percent same-store sales growth."

Banks
ICICI Bank and Bank of Baroda rallied 2 percent and 8 percent, respectively, after stable June quarter earnings. Sivaram said 90 percent of non-performing assets (NPA) recognition has occurred for corporate banks, thanks to the Reserve Bank and government's initiative of bringing in a National Company Law Tribunal and Insolvency & Bankruptcy Code.

He added that there has been a significant reduction in credit cost to 1-1.5 percent from 2-2.5 percent in the previous two years. 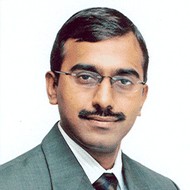 Two-wheeler
He is bearish on bike stocks now after pricing war ignited by Bajaj Auto. He feels investors should be careful and look at buying just before the end of pricing war.CementSivaram said demand for cement will continue despite issues with the Competition Commission of India and on valuations. He is bullish on this space in general.
Moneycontrol News
Tags: #MARKET OUTLOOK #Nifty #Sensex
first published: Jul 30, 2018 11:46 am