Infrastructure sector on road to re-rating, keep an eye on these 16 stocks

Despite concerns around the coronavirus outbreak, for the infrastructure sector, this period has been mostly Reboot-2.0, HDFC Securities has said in a report.

The economy might have shrunk by more than 23 percent in the June quarter amid the COVID-19 pandemic but there is one sector that is on the road to recovery and could get re-rated in the near future.

Despite concerns around the viral outbreak, for the infrastructure sector, the period has been mostly Reboot-2.0, HDFC Securities said in a report.

“We remain optimistic and see sector rerating at a 4-5x book-to-bill and sub 6/4.6x P/E for FY22/23E when peak ordering is still some time away,” it said.

The factors that work in favour of re-rating include 1) NHAI awarding (FYTD21) started with a bang (about to surpass FY20); (2) the largest client NHAI eased working capital for developers; (3) banks are using surplus liquidity and low-interest rates to increase allocation to the sector; (4) concerns on NHAI balance sheet seem to be abating; (5) increase in fuel cess to add Rs 1tn to fund infra annually (total Rs 2.3tn); (6) asset monetisation to lead to BS deleveraging; and (7) Atmanirbhar and NIP programs' on-ground execution lends visibility to longer duration Indian Infra build-out.

The domestic brokerage firm is of the view that there is a case for multiple rerating for the sector. FY21E awarding was supposed to be muted following the coronavirus outbreak but it surprised with robust awards.

Besides, infrastructure creation is the backbone of manufacturing and translates to lower logistics costs. The plan resonates with the government’s Atmanirbhar schemes.

“The Hybrid Annuity Model or HAM (assets, too, are backed by revenue models and decent IRRs. At sub 4.6x FY23E core P/E and peak awards some time away, we believe the sector has 1SD target P/E expansion potential of 2-3x PE from here,” said the report.

Some experts are of the view that the recent rejig in the muticap fund schemes could lead to churning of portfolios and smart money could move into some of the quality infra players.

According to new rules, multicap funds must invest at least 25 percent of their portfolio each in largecap, midcap and smallcap stocks by January 21. At present, most multicap funds clearly have a largecap bias.

“The new rule announced by SEBI saw a rally in midcap and smallcap infrastructure stocks. Stocks such as KNR Constructions and PNC Infratech hogged the limelight, whereas largecap names such as L&T were down,” Keshav Lahoti, Associate Equity Analyst, Angel Broking Ltd, told Moneycontrol.

Here is a list of 16 stocks that HDFC Securities recommends as long-term buys: 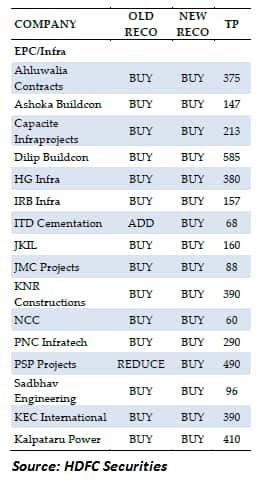 We root for PE expansion towards pre-COVID levels. Ahluwalia Contracts with the robust order book, strong corporate governance, superior ROE profile, and near net cash status may see re-rating in the near to mid-term.

HDFC Securities is of the view that ACL monetisation is critical for PE rating. For now, the target PE remains unchanged and below pre-COVID levels. ACL needs to achieve monetisation for serious re-rating.

DBL has started FY21 with a bang with order inflow in excess of Rs 100 billion and surpassing FY20. With a large part of ordering in FY21E still ahead, DBL stands to win more orders.

The good part is that orders are largely coming from non-roads, which augurs well for diversification. “We ask more on BS improvement, with a sustained reduction in debt. We understand HAM asset monetisation shall aid BS deleveraging,” said the report.

Owing to likely order inflow and execution surprise, we have upgraded PE multiple.

HDFC Securities has kept PE unchanged as it wants HG to get networking capital sorted out with collection from the Rajasthan government and private debtors. The execution and new HAM project wins are contingent on debtors' recovery.

With GIC inflows at the private Invit level, long term strategic intent of the partnership and new win in Mumbai Pune ToT, IRB warrants a re-rating.

Whilst JKIL has a history of unfortunate bad press, it has come out stronger every time. Now it’s time for the delivery of numbers on the back of a strong order book. EPS growth surprise will lead to PE re-rating.

JMC has surprised us on order intake in FYTD21. Labor availability is improving, non-buildings segment share is increasing for the company and painful BOT assets may see restructuring by FY21E end. This warrants a PE re-rating.

KNR has a lifetime high order backlog of more than Rs 100 billion, including L1 on the back of Rs 43 billion of new wins FYTD21, and may bag Rs 20-30 billion further for the rest of FY21E. There is a serious case of the EPS upgrade for FY22/23E even to our current numbers.

HAM/BOT portfolio is already monetised with the Cube tie-up. Irrigation receivable is a cause of concern but manageable. Hence, HDFC Securities upgraded PE from 12x to 15x for this net cash company (ex promoter debt).

NCC is the eight largest Indian infrastructure company, though it has had fair setbacks viz Sembcorp, AP order cancellation and real estate shocks. Despite this, the company is one of the few to have survived across cycles.

FYTD21 order inflow is robust at Rs 42bn. We believe NCC, with its diversified capabilities, is well aligned with NIP programmed and once large ordering happens, NCC will benefit. Sembcorp arbitration resolution is nearing finality.

AP execution has resumed and pending dues are slowly getting cleared by Govt. HDFC Securities believes that NCC warrants a re-rating but as of now, we have retained our 8x target PE and will be watchful of positive news flow on recovery.

PNC has seen significant re-rating over the last two-three years on the back of robust order inflow and growth delivery. Now at Rs 45 billion turnover, PNC needs to diversify outside roads in a big way and use its credentials in Railways to get new wins.

PNC has improved its NWC over the last four to five quarters through a mix of arbitration claims receipt and a better choice of projects.

A large part of FCF is going towards HAM equity (Rs 15 billion for the portfolio, Rs 10 billion yet to be invested). HDFC Securities believes that PNC multiple re-rating is contingent on segment diversification and asset monetisation.

PSP has achieved scale with the successful execution of the nearing completion SDB project. The company will now get eligible for larger orders of more than Rs 20 billion.

There is limited visibility of growth with Rs 30-billon order book but the brokerage firm believes that PSP has credentials and will win new orders. It increased the target PE from 10x to 12x.

SEL is under financial and execution healing with the sale of SIPL assets. The promoter has shown intent to make SEL pledge-free in the next few months.

The execution is guided to get normalised to Rs 100 million a day from October 20. SEL warrants a PE expansion.

A minor increase in PE to factor in the sale of BOOT assets, near cash standalone BS, and improving real estate segment augur well for Kalpataru parent.