Primary trend of HSIL is positive as it is trading above its all short and long-term moving averages. Momentum oscillators like RSI and MFI are placed above 60 and rising upwards, indicating strength

The Nifty plunged 302 points on April 18 on the back of selling in technology and banking stocks to close at 17,174. In the last eight sessions, the index has fallen more than a thousand points from the high of 18,115 on April 4.

The short-term trend has turned bearish as the Nifty closed below its 20-day and 50-day exponential moving average (EMA).

In the week ended April 8, the Nifty formed “Doji” candlestick on the weekly chart. The significance of trend reversal has been high as a bearish candle was formed exactly at the downward sloping trend line, adjoining major swing highs on the Nifty weekly charts.

The Nifty also breached the low of the “Doji” candle last week, which confirmed the bearish trend reversal. Oscillators and indicators like relative strength index (RSI) and moving average convergence divergence (MACD) have turned bearish on the daily charts. 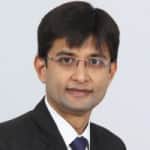 During April, Nifty midcap and smallcap indices have outperformed by rising by 3 percent and 2 percent as against 2 percent fall in the Nifty.

The stock price has broken out on the daily chart with higher volumes to close at the highest level since February 2, 2022. It has already broken out from the symmetrical triangle on the weekly chart.

The primary trend is positive, as the stock is trading above its all-important short and long-term moving averages.

Momentum oscillators like RSI and money flow index (MFI) are placed above 60 and rising upwards, indicating strength in the current uptrend.

The stock price has broken out from the downward sloping trendline on the weekly chart, adjoining the highs of August 28, 2020 and July 23, 2021 with higher volumes.

It has also broken out on the daily chart with a surge in volumes where it closed at highest level since August 2020. Momentum oscillators like RSI and MFI are placed above 60 and rising upwards, indicating strength in the current uptrend of the stock.

The stock price has broken out on the daily line chart, with higher volumes to close at the highest level since August 2017. The stock is forming higher top, higher bottom formation on the daily and weekly charts.