H-1B visa ban may not make that big a dent in top IT firms' revenues. Here's why

Top Indian IT firms have reduced their US visa dependency by 40-60 percent since President Donald Trump took office in 2017. In other words, the latest move by the American government to ban non-immigrant visas such as H-1B and L-1 may not make as big a dent as feared.

This drop came on the back of increased denials and request for evidences due to stringent visa regulations in the US. This resulted in companies stepping up their localisation efforts. Localisation in the US now stands at more than 60 percent for the top IT firms. According to experts, increased localisation will to an extent contain the damage caused by the disruption.

Currently, visa renewals of those in the US are unlikely to be affected. Till now denials and request for evidences or RFE, were high for renewals, resulting in many tech employees coming back to India. That will change and approval rates will increase. The new changes will come into effect in the next 90 days. Currently, on an average, only 70 percent of applications are approved.

This means that companies may not face a severe manpower crunch.

According to many experts Moneycontrol spoke to, visa issues are likely to result in more offshoring in the coming years.
Offshoring means moving resources to areas where the cost is low, for instance, India.

According to a research analyst, IT firms are likely to shift 2-5 percent of its resource to offshore locations in the coming months. Currently, offshore accounts for about 80-90 percent of the workforce across IT firms and this is likely to increase up to 85-95 percent on the back of COVID-19 and immigration reforms, the expert added.

Institutional equities firm Emkay said in its report that revenue from offshore has been increasing since 2017.

As offshore volumes and revenues grow, experts added this trend is likely to stay.

US tech firms will be hurt

Sheela Murthy, founder, Murthy Law firm, an immigration firm in the US, said in an earlier interaction that this shift would only hurt the US economy as not only Indian firms but also top US tech companies will look at countries like India to set up offshore centres.

The scenario is not too far off going by the recent H-1B approval rates. The top five US tech companies’ dependency on H-1B had increased 43 percent, whereas India’s dependency decreased by 50 percent over the last couple of years. Top employers include Amazon, Google, Microsoft, Facebook and Apple. 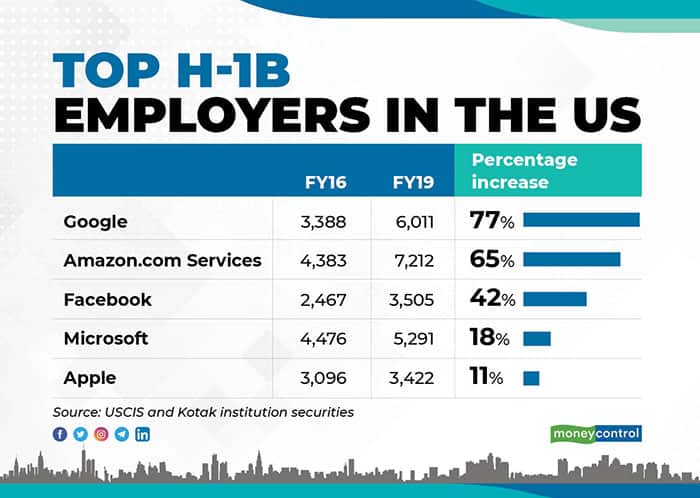