Overall, card transactions in 2020 for merchant payments are down 17 percent compared to last year, with credit card swipes falling below those of debit cards, indicating consumers may be conserving their credit lines for emergency use.

The economy might be clawing back from the devastating blow dealt by the coronavirus but Indians continue to consume less. They are also spending what they have— through debit cards—and are avoiding credit cards, data from the Reserve Bank of India shows.

In September, around 14.9 crore credit card swipes were reported at merchant outlets, compared to almost 18 crore last year, a drop of 17 percent, RBI data shows. This number was 12.5 crore in June 2020, down 23.3 percent from 16.3 crore in the year-ago period. 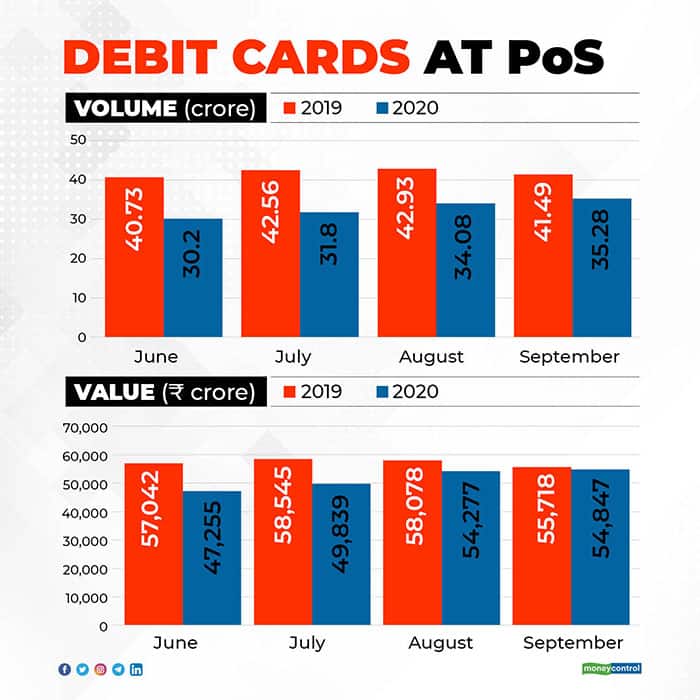 Credit cards are usually used for large-ticket transactions like flight tickets, booking holidays or at restaurants and pubs. The segment around holidays and food and beverages are completely missing, which could be one of the reasons for this drastic fall, experts said.  Also, debit cards tend to be used more for ATM cash withdrawals than merchant transactions.

As economic activity has gained pace over the last few months, there has been some uptick in transactions but levels are far below those in 2019.

For instance, looking at RBI data between June and September of this year, debt card swipes at offline stores have grown moderately around 19 percent. For credit cards, the June to September growth in usage at offline stores has been 22 percent, a strong growth but still below last year levels.

While the central bank’s data for the festival month of October is yet to come, September did see heightened business activity because of the early start to the annual shopping season and resumption of business activity in cities.

The only transaction mode that has recouped and grown is Unified Payments Interface (UPI). In October, UPI reported around 207 crore transactions, the latest numbers released by the National Payments Corporation of India that runs the payments system show. However, the bulk of UPI transactions tend to be person-to-person payments and not merchant transactions.

Industry insiders have pointed out that some merchant transactions may have moved from cards to UPI, but overall transactions for goods and services are down.

Not only has credit card spending declined year on year, but it has also slipped in comparison to debit cards. As of September, Rs 54,847 crore was settled through debit cards compared to Rs 50,139 crore for credit cards. While at 85 crore there are more debit cards in the country compared to just five crore credit cards, the spends on the latter tend to be higher in value.

“Historically in terms of value spends credit cards are at 55 percent and debit cards are at 45 percent, this year debit card spends have been higher,” said Manish Patel, chief executive officer, MSwipe, a Mumbai-based payments company that deploys payment terminals at merchant outlets.

Patel attributed this trend to people conserving their credit lines, given there is uncertainty in the overall economy.

Another top payment industry executive pointed out that many consumers have opted for easy financing options, like converting purchases into EMIs and others. This might have caused many credit card transactions to go down.