Latest data from the Commerce department for FY21 shows that relatively low value commodities, including both unprocessed raw materials and processed bulk goods, managed to hold their own throughout the pandemic-ridden year. A rise in global commodity prices and unused capacity due to drop in local manufacturing meant many commodity exports even managed to grow in 2020-21.

The 7.2 percent fall in India's exports during the pandemic-ridden 2020-21 financial year may have been much worse had it not been for a steady outflow of across the board commodity exports such as chemicals, ores, plastic, cotton and pulses steadying the trade figures.

Despite continuous government push over the past 5-years to increase exports of high-value manufactured goods across major markets, India’s export basket remains dominated by the commodities category.

Ironically, this comes even as the Commerce Department has been aggressively trying to raise the share of value added manufactured goods in the overall export basket.

"We have believed for some years now that long term dependence on raw materials would be inherently detrimental to the export sector. At the least, it would rob the industry the chance to transition to higher value products, up the value chain," a senior Commerce Department official, said. 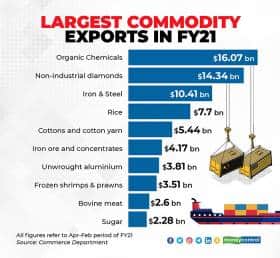 One of the reasons for the government's hesitation in backing commodities is the high volatility in global prices, which have been on display in the last financial year. The sudden rise in global commodity prices over the past 3 months of key input materials such as steel, chemicals and plastics have helped India's exports recover.

The largest consumer of metals and other construction products on earth, China has seen prices of  hot rolled steel coils, cement and copper all climb by more than 30 percent, according to Reuters.

Covering a broad basket of globally traded raw materials, the Bloomberg Commodity Spot Index, has risen more than 21 percent since the beginning of the year and has scaled a high not seen since 2016.

According to IHS Markit, the spiraling inflation began in January mainly due to a build-up of global supply chain issues due to the coronavirus pandemic and a lack of global freight containers. However, prices have continued to build on those levels as industries in many nations begin to fire up after and widespread input shortages become evident subsequently.

Agri commodities such as sugar and cotton have also seen prices shoot up. As a result, the government has reduced the central subsidy on sugar exports from Rs. 6,000 per tonne to Rs. 4,000 per tonne beginning immediately.

Meanwhile, while the trade in gold has suffered due to non-availability of duty free gold, diamonds have stabilised after the industry opened up after the lockdown, according to the Gems and Jewellery Export Promotion Council (GJEPC). "Improved international market demand in the third quarter owing to a robust holiday season, stimulated manufacturing across all product segments and overall gross exports," GJEPC Chairman Colin Shah said.

On the other hand, the sudden rise in commodity prices have raised the cost of manufacturing and hit exporters hard even as most are facing a liquidity crisis. In a series of meetings, exporters have asked the government to consider temporary price caps on input materials, restrictions on export of primary goods such as raw steel and financial assistance to the sector.

"There has been a substantial jump in export of primary steel in recent months while many value-added steel products shipped from the country have seen a 15-35 percent decline. We have therefore suggested the government to take non-tariff and tariff measures as part of the raw material export policy," said Engineering Exports Promotion Council India Chairman Mahesh Desai. 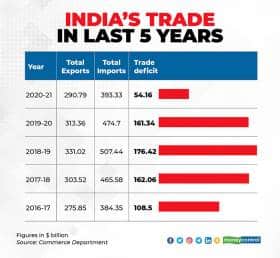 The latest shift in global flows is not expected to change  trade policy soon, officials and industry insiders say.

"The government believes widening the export basket is crucial to diversify and increase foreign exchange earning potential and catch up with nations like Vietnam (electronics), Malaysia (components) and Bangladesh (textile) who have focused heavily on labor intensive manufactured exports," a senior Delhi-based government trade advisor, said.

Instead, India has decided to take things up a notch and take a leaf out of China’s trade playbook and intensively specialise, produce and ship out a select category of ‘network products’ (NPs) such as computers, electronic and electrical equipment, and telecommunications goods.

A report by the Confederation of Indian Industry (CII) has pointed out that since 2012, China’s exports have increasingly moved up the value chain, with accelerated growth in high-technology items, such as telecommunications equipment, automotive products, cellphones, etc.