172@29@17@243!~!172@29@0@53!~!|news|business|economy|below-par-monsoon-could-spur-retail-inflation-impede-growth-report-2710071.html!~!news|moneycontrol|com!~!|controller|infinite_scroll_article.php!~!is_mobile=false
Subscribe to PRO at just Rs.33 per month. Use code SUPERPRO
you are here: HomeNewsBusinessEconomy

Torrential rainfall inundated sparse pockets of the country, while large swathes of land in agricultural belts lie fallow in absence of adequate rain

The southwest monsoon made landfall in Kerala on May 29, three days before its scheduled arrival. The onset of rain was heralded with much fanfare, with the magnitude of rainfall having a direct bearing on the health of a fragile agriculture sector and the fortunes of the political class in the run-up to the 2019 general elections.

In a country where only half the farmland is irrigated, the incidence of a normal monsoon acquires even greater importance. The monsoon also delivers over 70 percent of the country’s total rainfall, and an abatement in rain during the season could have repercussions on the socio-economic fabric of life in the countryside, given the announcement of a hike in the minimum support price of kharif crops and farm loan waiver schemes implemented in various states.

The India Meteorological Department (IMD) predicted that the monsoon rainfall will be 97 percent of their long-term average in 2018. However, a month into the monsoon season, forecasters have been proved wrong. Torrential rainfall inundated sparse pockets of the country, while large swathes of land in agricultural belts lie fallow in absence of adequate rain. According to a report released by Kotak Institutional Equities, cumulative rainfall till July 11 was 8.7 percent below normal, while on a weekly basis, precipitation levels induced by the southwest monsoon was 13.9 percent below normal. The southern peninsula has received favourable rainfall, as has the western coastline, but latency in moving to the hinterland has delayed the sowing of kharif crops in many parts of central India.

The monsoons have made a delayed push towards the northwest part of the country, picking up pace in the recent weeks. Of the 36 sub-divisions that the country is divided into, seven have received excess rainfall, while 17 recorded normal rainfall. However, 11 sub-sections had deficient levels of precipitation and one received scanty rainfall.

Tamil Nadu, coastal Andhra Pradesh and parts of the Konkan coast received excess rainfall. Most regions in the Gangetic plain have had deficient rainfall, with large swathes of farmland in Uttar Pradesh, Bihar and Madhya Pradesh reeling under a prolonged dry spell, halfway through the monsoon season. However, the monsoons have brought cheer to the farmers of Marathwada and Vidarbha regions, which have been reeling under agrarian distress with successive droughts nudging many into debt. Punjab also recorded rainfall above levels normally witnessed during this season. 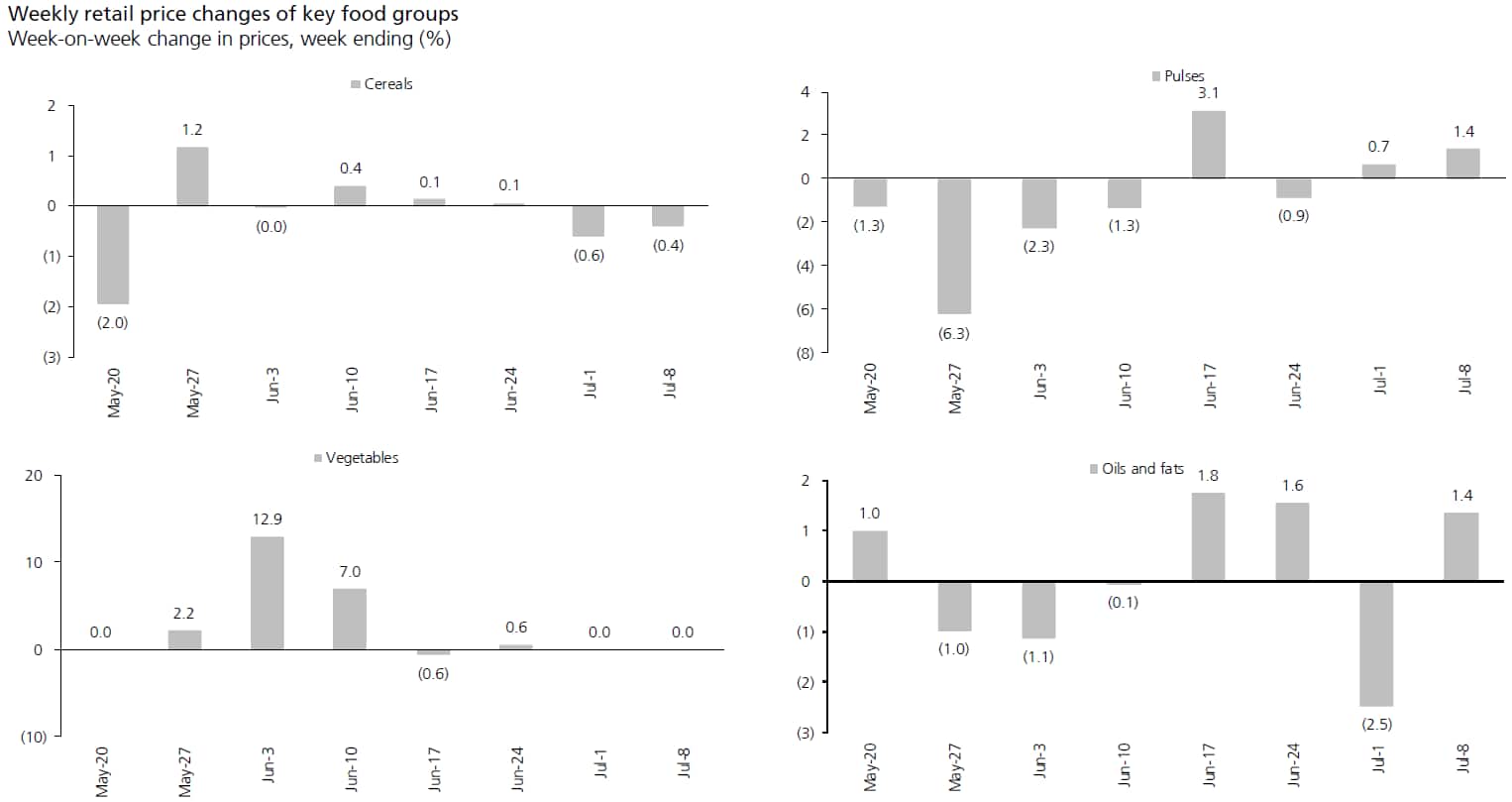 Retail food prices have also fluctuated in recent weeks. Vegetable prices were flat over the past couple of weeks, while that of pulses increased 1.4 percent over the past week. According to data compiled by the Department of Consumer Affairs, cereal prices fell 0.4 percent while that of oil and fats increased by 1.4 percent. It must be noted that the weekly data put out by the Consumer Affairs Ministry is only a tentative indicator of retail food inflation.

The inflationary impact of a below-par monsoon will only be felt once the shortfall in sowing translates into a deficient yield when kharif crops are harvested. The mixed trend in food inflation in June presents a hazy picture of momentum in prices as demand will be met by produce from earlier months. As of July 6, the total acreage under kharif crops was down 14.2 percent when compared to the year-ago period. The sowing of rice – a mainstay in the diet of many Indians – was down 15 percent at 6.7 million hectares. Food inflation could be pushed up in the latter part of the year as the acreage under pulses has dropped by almost 20 percent at 3.4 million hectares. Sugarcane and cotton sowing are also down. Deficient rainfall in the cotton belt in Western India has contributed to the acreage under cotton reducing by almost 25 percent from the year-ago period.

Riparian communities reliant on a good monsoon for irrigation and other economic activities like fisheries will be affected by a shortfall in seasonal precipitation. Basin-wise reservoir levels remained in deficit when compared to long term average levels. The Narmada and Krishna basins are in surplus while the Ganga, Godavari and Mahanadi basins are in deficit. The current reservoir level in the Krishna basin is twice what it was last year, while the Cauvery River, the bone of contention between Tamil Nadu and Karnataka, is in surplus, with water levels exceeding those recorded last year by 313 percent. However, with only staggered rains witnessed in parts of North India, water levels in the Ganga and Indus basins are down 35.4 percent and 61.3 percent respectively. On the whole, river basins are down 0.9 percent below the long term average for the week ending July 12.

The IMD’s second stage forecast says July and August will receive 101 percent and 94 percent rainfall respectively. However, these predictions will be treated with skepticism given the performance of the monsoon in June. The impact of a good monsoon is beneficial not only for agriculture, but also for various other sectors since a spur in rural demand will facilitate the consumption cycle and contribute to overall growth in the economy.