Access Selected Content from
Financial Times on Moneycontrol Pro
Webinar :Register now for webinar on 'Trade BankNifty in just 15 minutes a day' - By Asmita Patel
you are here: HomeNewsBusinessCryptocurrency

Many analysts are now betting on the safe-haven appeal of Bitcoin after the cryptocurrency started showing behavioural patterns similar to gold earlier this year.
Suyash Maheshwari
Feb 12, 2020 / 04:58 PM IST

The world's largest cryptocurrency, Bitcoin, surged past $10,000 mark once again on February 12 to form a new high for Calendar 2020.

It is now trading near its five-month high at $10,324.21, rallying a whopping 42.95 percent year-to-date, data collected from Coindesk shows. 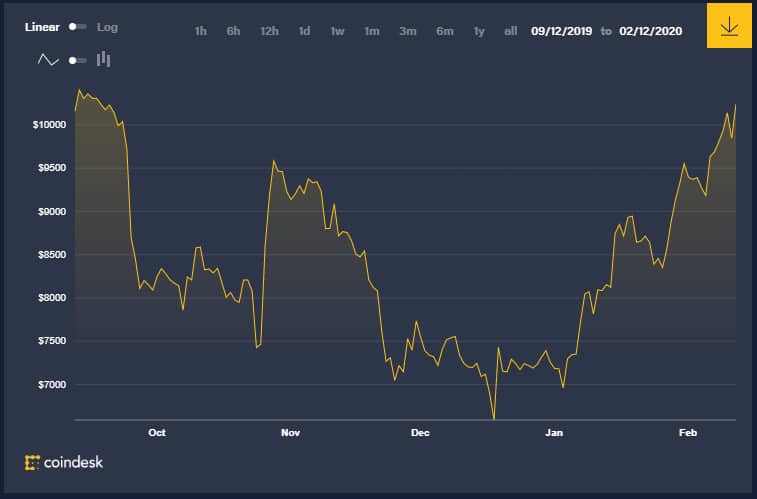 The latest price surge came after the Federal Reserve Chairman Jerome Powell’s testimony to the US House Financial Services on February 11 where he asserted the need to keep up with China's digital yuan.

Responding to the US Congressman Bill Foster concerns over the need to keep up with China’s digital currency ambitions, Powell said a “lot of projects” are underway.

"A ledger where you know everybody's payments is not something that would be particularly attractive in the context of the US," Powell told the committee.

Cryptocurrency proponent and advisor at Monsterplay, David Freuden, told Coindesk that Powell's comments have turned the tide in favour of digital currencies.

However, he added that the US government will insist on creating “back-doors” on all major technology innovations.

“The U.S. government has the misguided assumption that it would be the only government that would request or coerce a back-door," Freuden told Coindesk.

Despite the scepticism over digital currency, data shows that Bitcoin has managed to outperform other asset classes, such as gold, crude, Nifty and rupee in the last six out eight years.

Many analysts are now betting on the safe-haven appeal of Bitcoin after the cryptocurrency started showing behavioural patterns similar to gold earlier this year, according to Bloomberg.

“Since the beginning of the new year, the two assets 60-day correlation has flipped from negative to positive. The correlation coefficient now stands at 0.21, up from a low of negative 0.15 in December, and above the trailing one-year daily average,” said a Bloomberg report.
Suyash Maheshwari
TAGS: #bitcoin #cryptocurrency
first published: Feb 12, 2020 04:58 pm