Domestic flights fare: Here's why a price cap may not help either airlines or customers

Civil Aviation Minister Hardeep Singh Puri said fares in the Delhi-Mumbai route, the busiest, will range between Rs 3,500 to Rs 10,000.

Airlines in the country had no other option but to play ball when the government put forward the proposal to cap the fares as a condition to resume domestic flights.

"The choice was either don't start operations, or accept the fares," said a senior official from a private airline.

That explains the buzz in the industry after the government's decision to cap fares as airlines resume operations from May 25.

Addressing the media on May 21, Civil Aviation Minister Hardeep Singh Puri explained the fare cap, taking the Delhi-Mumbai route as an example. It is the busiest route in India, and among the top-five globally.

Experts opine that this is going to be a dent for airlines.

"The pre-COVID-19 fares were highly discounted. As per the existing fare list, the maximum fare for DEL-BOM is about Rs 23,000 one way. SpiceJet listed tickets at Rs 17,000, which is lesser. By capping the fare at Rs 10,000 it's going to be a big blow for the airlines," said Amit Singh, an industry veteran and Fellow of London's Royal Aeronautical Society.

"The fares are varied by the revenue management system to ensure that the flight generates the yield to cover expenses. If you cap the fare at Rs 10,000 and the flight is 25 percent booked, its a dead loss. Its better not to fly than make more loss," Singh added.

Though Puri has clarified that the airlines don't need to keep the middle seats in flights empty - to maintain social distancing - the demand is expected to be muted given the increasing number of those reported to be infected with COVID-19. The initial flights though could be full, given the pent up demand from those who are stuck in different parts of the country. 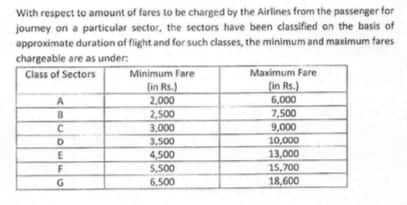 On the fare cap, a senior executive from the industry further explained why it is important not to control the rates, and how it impacts the weakest airline the most.

"If intrinsic demand is muted, then the minimum fare will help in general. Maximum fare will not be that relevant.  However, when demand is muted and minimum fare is higher than what it would otherwise have been, the weakest player suffers the most as it cannot use discounting as a method to steal share from competitors as well as buses and trains, or to stimulate demand. Then the demand goes to the stronger players offering that fare."

He added: "That is why typically leaving fares to be determined by the market is the best method."

The only relief for airlines may be that the present regulation will last till August 24, after which the government will review the situation.

Ironically though, passengers, who were enjoying rock bottom fares before the virus struck, have been left wondering after looking at the fare band for the Delhi-Mumbai route. A Delhi-Mumbai ticket had gone down to Rs 2,200 one way.

Nishant Pitti, CEO of EaseMyTrip.com, however believes that the customer still stands to gain.

"Earlier customers had to pay up to Rs 25,000 one way for  Delhi-Mumbai tickets in peak season. Now with the upper cap, they will end up paying a lower fare of approximately  Rs 11,000, even for a last-minute flight. According to us, trends will shift more on last minute, or bookings for the next three days of travel."