Microfinance institutions (MFIs), which fund small borrowers, are likely to pass on the rising cost of funds to their customers, primarily new ones, as interest rates increase. Muthoot Microfinance may raise rates by 25-30 basis points

Customers will have to pay more in interest even for small loans from microfinance institutions (MFIs) as lenders seek to pass on their rising cost of funds to borrowers as interest rates are raised.

Most major NBFC-MFIs charge interest in the range of 18-22 percent. But, with the Reserve Bank of India raising the key policy rates by 40 basis points to 4.40 percent on May 4, most of the microlenders are planning to revise their interest rates.  “We may hike our lending rates by 25-30 basis points for new borrowers,” Sadaf Sayeed, chief executive officer (CEO) of Muthoot Microfinance told Moneycontrol. One basis point is one-hundredth of a percentage point.

Microfinance Institutions (MFIs) lend to low-income borrowers like  small traders, corner-store owners, push-card vendors and  craftsmen. These lenders operate as non-banking finance companies and in other formats and primarily source money from banks to fund their operations.

Following a crisis in the sector in October 2010 triggered by a controversial law introduced by then Andhra Pradesh government to curb MFI loans, the RBI framed new regulations for such companies, forming a separate category of NBFC-MFIs. The law was sparked by reports that the use of coercive recovery practices by the lenders was forcing overextended borrowers to commit suicide.

Interest rates on micro loans are decided by the MFIs based on board-approved policies. In March 2022, the RBI removed the interest rate ceiling on loans offered by the NBFC-MFIs, letting them modify their rates. Earlier, MFIs used to decide their lending rates based on a quarterly benchmark rate set by the RBI.

“With the present rate changes by RBI, the sector may see a marginal rate hike of 10-20 basis points at the end-borrower level, that too spread over a year and not upfront,” said Rahul Kumar, Chief Operating Officer of Prayatna Microfinance.

“If interest rate increases, MFIs will be forced to pass this on to the borrowers,” said Sayeed of Muthoot Microfinance.

Analysts pointed out that irrespective of a rate hike happening across various financial institutions, MFIs anyways had to increase their rate of interest after the cap was removed.

“Their borrowing cost was high but the lending rates were capped, so they were not able to serve certain sections of customers as the price cap was hindering that,” said Prakash Agarwal, analyst and president of financial services at India Ratings and Research. “Now, most of the MFIs will increase their rates, at least to a certain section of borrowers.” 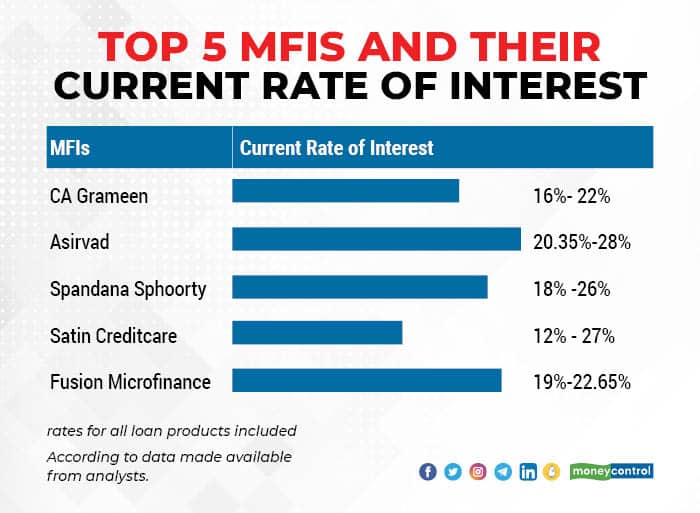 RBI rules define a microfinance loan as a collateral-free loan, given to a household with an annual household income of up to Rs 3 lakh.  MFIs lend to customers who do not have any access to banking facilities.

When the pricing cap was in force, the RBI had set a limit on the maximum interest an MFI could charge on loans, which was set at a maximum of 10-12 percentage points above the institutions' cost of funds or 2.75 times the average base rate for the top five commercial banks.

“The rate would vary from entity to entity, as MFIs would want to compensate for margin loss and high credit cost witnessed in the last two years,” added Sachin Sachdeva, vice-president of financial sector ratings at credit assessor ICRA Limited.

Boards to take a call

If the board of an MFIs feel that the cost of fund has increased, they can get the policy approved at the board level and rework the end-borrower interest rates,  experts said.

“When the loan is taken for consumption purpose like daughter’s wedding or child’s studies, it might be slightly difficult for the borrowers if the rate of interest rises,” said Kishore Kumar Puli, managing director of Pradakshana Fintech. “But if the loan is taken for productive purpose, there is no need to bother.”

That is because when a loan is taken for a productive purpose like an occupational reason, the borrower stands to earn a profit that would help pay off the loan.

Little movements in interest rates aren’t typically a big concern for MFI borrowers as much as access to loans, said Saibal Paul, associate director of Sa-Dhan, an association and a self-regulatory organisation for the microfinance sector.

“Rate of interest has never been a concern for the customers of MFIs; customers approach MFIs because of their accessibility. MFIs are there for primarily small ticket-size loan for those who fail to access banks,” he said.

The main purpose of the MFIs is to ensure that poor people get timely credit. “So, a slight hike in the rate is unlikely to affect a majority of the customers; having said so, the leap should not be very high and usurious,” Paul said.

MFIs: lender to the poor

MFIs play a significant role to make credit available to poor borrowers, who will have to otherwise depend on local moneylenders.

“In the absence of funding from MFIs, small borrowers had to reach out to local money lenders, who charged significantly higher rates, which are unsustainable for borrowers,” said Sachdeva of Icra.

Increased price competition among all the lenders involved in microfinance is expected to benefit the borrowers in the long-run, Sachdeva added.