Axis Bank-Citibank deal: India’s credit card market is at crossroads. Which way will it go?

Credit card spends have survived the rapid expansion of the Unified Payments Interface, which continues to eat into the payments pie. But with BNPL posing a fresh challenge, issuers face a challenge in widening credit card usage.

Analysts believe that card swipes will grow as the pandemic recedes but the market won’t be what it used to be.

India’s credit card market has been struggling to breathe ever since Covid-19 made people rethink their spending patterns. To be sure, credit card outstandings are still expanding, which shows that Indians are still swiping cards to fund their desires; but the pace of the spending has reduced. Compounding the industry’s woes, the rise of buy-now-pay-later (BNPL) financing is posing a fresh challenge.

Analysts believe that card swipes will grow as the pandemic recedes but the market won’t be what it used to be. These developments have cast a pall over a lucrative, high-margin business for lenders. Axis Bank’s purchase of Citibank’s India retail business comes in the backdrop of this fatigued credit card market, which is looking for a second wind. Plastic is not long-lasting

There are indicators that show just how badly the pandemic has distorted growth rates in the credit card market, including the absolute value of loans. During FY21, credit card outstanding grew just Rs 10,849 crore, way below the Rs 30,630 crore in FY20. In the five years before the pandemic, lenders had added Rs 12,000 crore worth of credit card debt on average. This is a clear sign that the pandemic has brought down spending.

To be sure, there has been some recovery as the pandemic recedes. During the first ten months of the current financial year, credit card outstanding grew Rs 11,512 crore or 11 percent. Again, the number of cards issued grew a mere 7 percent in FY21; in the first 11 months of FY22, however, 9.7 million cards were issued, taking the total number of outstanding cards up 15 percent to 71.7 million. 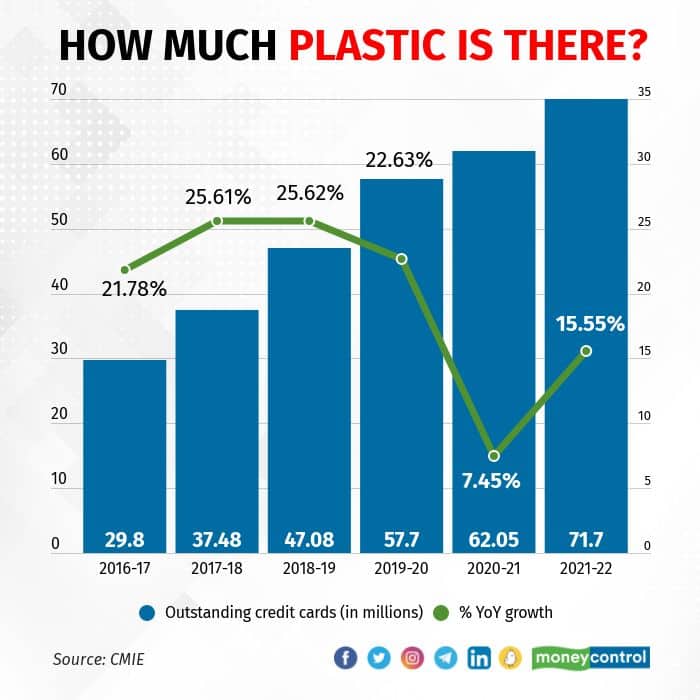 The adjoining chart shows how the growth in cards issued has come down. Part of the reason has been the regulatory ban on the largest card issuer, HDFC Bank, in FY21. Also, the on-boarding of new customers has been difficult for lenders because of the weakened consumption propensity of Indians in the wake of the pandemic impacting employment and income prospects.

Beyond these shocks, a silent killer is at work posing a challenge to the credit card market. The rise of BNPL or unsecured small-ticket loans and the proliferation of fintech companies have put a question mark over the growth of credit cards.

Buy-now-pay-later is nothing but a repackaging of the unsecured retail loan business of banks. The difference between traditional unsecured loans and BNPL is that the latter has a wider scope and a smaller ticket size.

India’s BNPL market is estimated to surge to $45-50 billion by 2026 from the current level of $3-3.5 billion, according to Redseer. New lenders that focus on BNPL, such as ZestMoney, Capital Float, and Simpl, have recorded a sharp growth in recent years.

BNPL’s surge as a product has lured banks into tying up with new-age fintech firms and offer BNPL on digital platforms. For example, merchant payments platform Pine Labs offers BNPL through more than 35 lenders. Pine Labs processes loans worth nearly half of consumer lender Bajaj Finance’s balance sheet, Credit Suisse had pointed out in a February 2021 report.

BNPL as a product is also more acceptable to the new generation of millennial borrowers, who have shown a general distrust towards credit cards. A survey by YG Research India Pvt Ltd (YouGov) showed that one in every five Indians has used BNPL for purchases in the past three months.

As BNPL gains in popularity, banks will need to balance their desire to pursue a high-margin business such as credit cards with the demand from borrowers for the convenient and low-cost BNPL route.

“There is increased competition in the space but the industry continues to grow. It may so happen that credit cards may foray into the low-ticket (sic) Buy Now, Pay Later (BNPL) segment or vice versa. But as industry and customer base continue (sic) to expand, there exists (sic)opportunities for players to co-exist,” analysts at Elara Securities Ltd wrote in a note.

While Axis Bank’s motivations to acquire Citibank’s India retail business are many, the 2.5 million high-spending credit cardholders are the icing on the cake. Analysts believe the biggest challenge for the bank would be to retain Citibank’s customers (both borrowers and depositors) and expand it further. One of the cross-selling opportunities here could be BNPL.

Credit card spends have so far stood up to the challenge of the Unified Payments Interface (UPI), which is eating into the payments pie. It remains to be seen how well banks are able to widen credit card usage alongside the simpler but less lucrative BNPL.