As on May 1, some 83 of the 150 power plants running on domestic coal reported critically low coal levels and many of them cited lack of rakes as the reason. On April 29, the railways cancelled 657 mail and passenger trains to ensure faster movement of coal rakes

Nearly 70 percent of India’s electricity comes from coal, and most of that coal is delivered to power plants by railroads.

As on May 1, some 83 of the 150 power plants running on domestic coal had critically low fuel stocks and many of them cited lack of rakes as the key reason. Eleven imported coal-based power plants also had an alarmingly low level of the fuel.

Since 2006, there have been 10 instances when more than 50 thermal power plants in India reported critically low coal levels, the last of which was in October 2021.

While the state-run, near-monopoly Coal India has struggled to scale up its production, the constraints in the rail transport infrastructure has only made the situation worse.

Out of the 653 MT coal transported by the railways, around 83 percent, or around 540.4 MT, was to thermal power plants. The remaining was to foundries of different manufacturing units.

According to railway ministry data, nearly 95 percent of coal transported by the IR comes from Coal India’s reserves while the remaining is imported coal.

Rail transport is economical, compared to other modes of transport. Also, road transportation and inland shipping have physical limitations, which make railways the preferred choice.

“Lack of proper roads connecting coal mines and quarries across India, the high fuel cost of trucks, slower movement through trucks and higher pollution by trucks make it infeasible for coal to be transported in trucks in India,” an official from a large domestic logistics company said. Coal is gold for IR

The power sector depends on IR, and coal transport makes up nearly 47 percent of IR’s freight revenues and has an even higher share in its profits.

“IR’s business model is based on passengers underpaying and freight overpaying. Therefore, coal, its largest transported commodity, play a very big role in its revenues,” a logistics expert from Goldman Sachs said.

As per their research, the IR today explicitly overprices coal freight by about 31 percent to offset coaching losses for its passenger operations, he said.

In 2020-21, this “overcharge” from coal to thermal power plants stood around Rs 148 billion, thus increasing the cost of power, on an average, by about 10 paise per unit, on the basis of the electricity generated in the country.

“For coal carried by railways, on an average, this number is Rs 0.41/kWh in FY2021. For power plants in distant states, which inherently rely on railways for coal, this number can be three times higher,” Kamboj said.

The railway data shows that in the last five years coal revenue has grown at a faster rate than that from other commodities.

But even as coal continues to be a major source of revenue for the railways, the capacity for coal transport has not increased significantly.

“Before 2016, the biggest reason for coal shortage was the shortfall in Coal India’s output. However, in the last three years, production by Coal India has picked up. However, a combination of logistical bottleneck and payment issues still cause a coal shortage,” said a senior infrastructure expert.

In fact, so serious is the coal supply-logistics issue that the IR has cancelled many mail and express trains to facilitate faster movement of coal rakes, he said.

The IR supplies coal directly to around 130 of the 150 thermal power plants running on domestic coal, while the remaining plants are supplied indirectly.

“Around 20 thermal power plants are not directly connected with high-speed railway lines, or have not maintained their tracks properly, due to which there is no last-mile connectivity to these plants,” a senior government official said.

On an average, IR transports coal to thermal power plants on a biweekly basis, on a rotating quota to different power plants, through goods trains that are run on mid to high priority, depending on the requirement by the power plant.

Till September 2021, the IR used to transport coal using around 300 rakes per day. In April, it was increased to 410 per day. 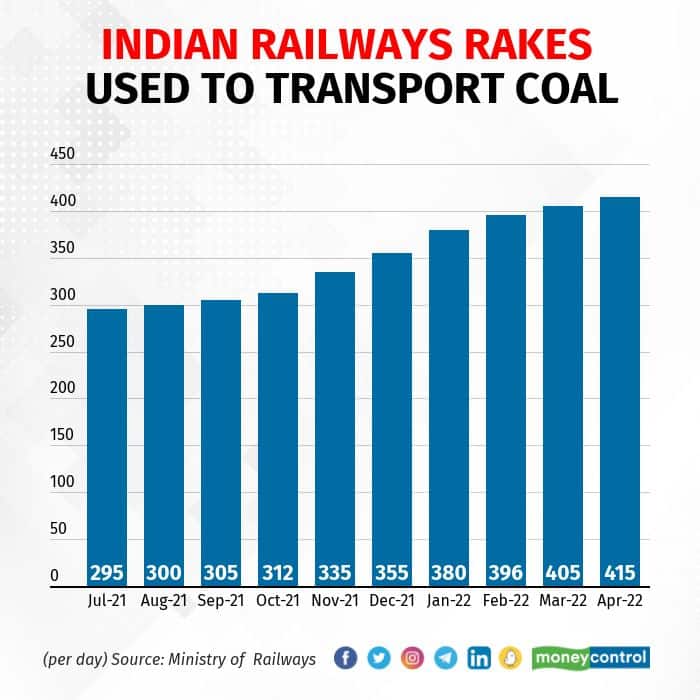 While the Indian Railway has said that it has allocated the highest possible capacity for coal transportation, demand has historically increased faster than the infrastructure needed to produce and transport coal in the country. A senior official from the Indian wagon industry said: “Before 2016, the IR was eyeing an incremental growth of, say 3-5 percent every year, and was carrying around 700-800 MT of traffic annually.”

IR would now order for 8,000-10,000 wagons every year to meet the targeted incremental growth, he said.

In the last five years, though IR’s freight loading has doubled, its orders for wagons have not increased accordingly.

The IR cannot increase capacity allocation to transport coal in India without disrupting the supply chain in other sectors.

Nearly 50 percent of all rakes available are used for coal supply. If the rake allotment is increased by 5-10 percent, there will be a shortage of cement and steel.

Many thermal power plants are not connected with high-speed railway lines, or have not maintained their tracks properly. This has led to delays in the supply of rakes to these locations.

Another logistical bottleneck is that the average loading time at thermal power plants is around 6-7 hours at present. This is very high, according to railway officials.

“If the loading time is halved to around 3-4 hours, rakes can be reused and supply can be increased even more, especially in shorter distances,” a senior government official said.

The government is planning to strengthen IR’s infrastructure and has stressed on commissioning 14 critical coal-evacuation railway projects.

Projects on a deposit basis are developed using non-railway funds.

The government, in 2022-23, has also come out with an order for nearly 90,000 wagons to be supplied in the next three years, in order to meet the shortfall of wagons in the industry.

The national transporter is also looking to acquire 6,000 wagons in this financial year, which will be solely used for coal transportation.