The bilimbi tree plays an important role in the narrative of 'Anthill'. (Photo: Joygeorgek via Wikimedia Commons 3.0)

Vinoy Thomas won the 2021 Kerala Sahitya Akademi award for his novel Puttu - Anthill, its English translation by Nandkumar K, was released on January 15, 2023.

But you might already know his writing for a different reason - he wrote "Kaligeminarile Kuttavalikal", the story that Lijo Jose Pellissery's film Churuli is based on.

As in Churuli, the village (Perumpadi) in Anthill has a backstory of its own - a refuge for those on the run from the law and from society, it is described as a land of sinners. Indeed, child molesters rub shoulders here with cashew smugglers and con women claiming to have divine vision. 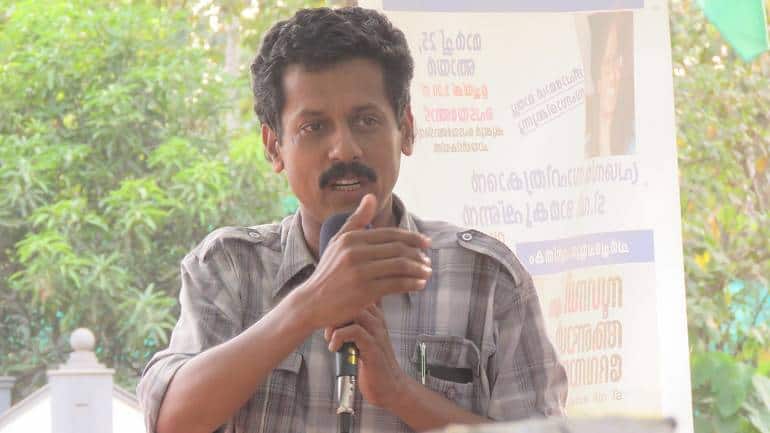 But it is also a place of refuge for the downtrodden and those looking for a fresh start - the woman who has an affair with her brother-in-law and has nowhere else to go; the sex worker who needs a new means of livelihood as she ages; the man who inherits the responsibilities of village mediator from his father; a fantastical man who is desired, reviled and mythologised here. Anthill's 200 characters each have their own backstory and arc, and yet the whole is cohesive, even immersive.

In an email interview, Thomas spoke about Anthill, his literary influences, his readers, the moral compasses that Anthill defies, and what he's reading, watching and writing now:

Who are your biggest literary influences?

Like many of my generation, I was brought up on a diet of penny-dreadful meets Mills & Boon in Malayalam literature; they go under the genre of painkili (sic) stories. They were, understandably, the initial influence. Baton Boss, Kottayam Pushpanath and Mathew Mattom were glib, facile storytellers, enough for people like me to get addicted to them at that point of my journey as a reader. But those penny-dreadfuls did help in instilling in me a reading habit at a young age.

Then, with access to local libraries, I graduated to reading Basheer, M.T. Vasudevan Nair, Punathil Kunjabdullah, K. Surendran, O.V. Vijayan, M. Mukundan, who are venerated writers in Malayalam; and they became mine too. Then I moved on to translations from other languages and my favourites among them were Dostoevsky and Tarasankar Bandyopadhyay. Even the contemporary Malayalam writers have influenced my writing in many ways. If I am asked to select one among them, S. Hareesh would be it. His writings have been the greatest motivation for me.

There’s an element of fantasy in 'Anthill' that must have been pretty hard to translate. Did you work closely with the translator or oversee the drafts? Nandakumar and I were in constant touch during the translation. There are some leitmotifs and imageries that I have used in the novel which are indigenous to our locality. For instance, the bilimbi tree, which plays an important role in the narrative. Its fruits cover the tree from top to bottom like bees on a beehive. Only those who are familiar with the tree and its fruits can understand the fantasy attached to it.

Perhaps the biggest challenge he may have faced as a translator could be how to render these regional imageries into another language. Through our discussions we were able to resolve these.

Inevitably, in the narration, my characteristic style of nit-picking, mimicry, mockery, and lifting up the cloak and peering inside things have all come in. I am most happy that Nandakumar has made a good fist of it, without any attenuation.

You place the story in a very specific part of Kerala – does the English translation inevitably flatten some of the regional nuance?

The locale is a boondocks called Perumpadi whose remoteness attracts migrants. Being migrants, a majority of the characters use the Kottayam-Pala dialect. There are minor players who have migrated from Thrissur, Kozhikode and Thiruvananthapuram also. The denizens of places around Perumpadi use the Malabar dialect. They too figure in the novel. Therefore, many of the dialects used in Kerala appear in the novel.

I do not think that these patois and dialects can be reproduced in English. Nandakumar has overcome this by using equivalent phrases and using the original Malayalam word where unavoidable.

Are some of the characters based on real people? What can you tell us about them?

I have declaimed in the preface to the novel that everything is a product of my imagination. I cannot say it otherwise here too. After reading the novel, a few people have approached me claiming that they are so-and-so character in it. An example is Shukoor Haji. In the novel, the character becomes wealthy by selling fish. Shukoor Pedayangodu, who holds literary and novel appreciation discussions in front of teashops and shopfronts, had been a fishmonger once. He claims Shukoor Haji is him. If all the people of my place could read and would read the novel, every one of them would come to me claiming to be Jeremias Paul, Kunjandi, Kocharaghavan, Father Neerukuzhi, Prasannan, Neeru, Louis, Balls Scorcher, Sr Philomena, Gandhi of the Valley and all the other characters, depending on how the shoe fits. However, I shall not admit to anything. Any such admission would lead to undesirable consequences.

The novel does contain autobiographical bits and pieces. But none of them will be openly admitted to.
Is any segment of the book autobiographical? If yes, could you share an anecdote or two from your life that filtered into the book.

The novel does contain autobiographical bits and pieces. But none of them will be openly admitted to. A large part of the story of Paul sir’s family could form part of my family’s story too. Many of the mediations conducted by Jeremias Paul were done in my house. Once upon a time, I too smuggled cashews to Makkoottam. I have dived into the river, swum underwater, farmed and swung on the vines by its banks. Like Theruva Mathu and Uthaman, I have played cards with frayed, mushy decks and done black magic against some. However, it would be a dishonour for me to admit to these as autobiographical. Therefore, I desist. Everything is a figment of my imagination.

One thing I could admit to is the doings in the library. Nellikampoyil Sahrudaya Library has played a great role in my formation. Everything that I have narrated as happening in Perumpadi library has happened in my life too.

Could you talk us through the treatment of sex in the book – there is this matter-of-fact way in which the story talks about child sexual abuse, gay love, sex work, sexual harassment (at the party), and a fantastical virile man who can live under water. Were you consciously distancing from more puritanical views that we espouse in public?

I have met readers who, in an effort to appear genteel, claim that such people exist only in Perumpadi. Let them mull for some time and, hand upon their hearts, say how they and the people around them really are.

All the description of sex in the novel have not been brought in for the sake of prurience. Every character I dreamt up came with all those trappings and baggage. I had mentioned here before that people could turn up claiming to be characters in the book. If they do, I would ask them to their face if their lives weren’t as I have described in the book. If they are honest, they can give only a positive reply. This is all that I have done – when I wrote about anyone in the novel, I didn’t indulge in any censoring. I wrote everything as they are. What the puritans would think or that I may need to cross swords with them was never of concern to me and nothing I have written is with that intent. This is what happens in reality.

I have met readers who, in an effort to appear genteel, claim that such people exist only in Perumpadi. Let them mull for some time and, hand upon their hearts, say how they and the people around them really are. As someone said, chastity is only the lack of opportunity. You can see the true face of anyone only when the circumstances are in their favour.

Do you write with a Malayalam-reading audience, a pan-Indian audience in mind, or does this not matter in your opinion?

I don’t write with any particular audience or readership in mind. What is important is to narrate the stories that are within me. As a reader, I am keen to listen to the story of a Bengali village, a street in Ahmedabad, or people living in the foothills of Himalayas. I should assume the same is the case with people living there – they want to hear stories from Kerala. Jeremias’s mediations could happen in a North Indian village community; his decisions are the same as those of a village mukhiya.

After they have read Anthill (in its Malayalam version) many people have told me that life in Perumpadi is similar to that of the early migrants of Australia and other places. The plot of Anthill is relevant to any community that has migrants, families and religion.

What is the most exciting development in current Malayalam writing according to you? Who among your contemporaries do you admire most?

What used to pass for the ethos of Kerala in our literature were some social tropes such as zari-bordered mundus, Kathakali, the temple elephant, the brass ceremonial lamp, Theyyam, Muslim women in their veils, and Christian women in fan-tail mundu and scapulars. However, works now coming out which present minute aspects of parochial life is what I see as growth of Malayalam literature.

The patois and argot of people from the various corners of Kerala, their rituals and traditions, their vocation and all that are now becoming part of Malayalam literature. Democratisation and pluralism depicted as Kerala ethos is a heartening development. Most of the current crop of Malayali writers pay heed to this. I have already answered the question on who among them I admire most – it is S. Hareesh.

What are you reading right now?

I am reading Gitanjali Shree’s Tomb of Sand now. August 17 of Hareesh in Malayalam is a novel I loved reading recently.

What are you writing right now?

I am writing a novel with the working title Wealth with the theme of man’s concept of money. It is a rather large one, encompassing the monetary transactions that have taken place in Kerala’s and India’s history, changes in power equations and myths. I am also writing scripts for a couple of movies.

What movies/series are you watching currently?

The pandemic had turned me into more of a watcher of web series. Now I am back to watching movies in theatres. The last English movie I had watched was Avatar: Way of the Water. And some of the recent excellent Malayalam movies I have watched are Jaya Jaya Jaya Jaya Jaya Hai, Nanpakal Nerathu Mayakkam, and Aavasavyuham.