India will have not one, but two Raffles Hotels

Raffles Hotels, an iconic hotel brand, debuts in India with its Udaipur property. Puneet Dhawan of Accor says India will get another Raffles soon, in Jaipur.

India’s first Raffles property will welcome guests within the next month. Raffles Udaipur has been in the works for a few years and was to open in 2020 until the pandemic laid low the plans. The iconic brand, which debuted in Singapore in the early 1830s, has only 15 luxurious iterations across the globe. We speak to Puneet Dhawan, Sr Vice President of Operations - India & South Asia, Accor, about India’s first Raffles and the possibility of reviving tourism on the back of vaccinated travellers.

You open India’s first Raffles next month. Tell us about the hotel and the choice of the location.

Raffles is an iconic brand that provides legendary service. The hotel is set on a magical 21-acre private island amid Lake Udai Sagar, far away from the congested Lake Pichola. The palatial hotel is surrounded by Aravalli Hills, with a view of a 400-year-old temple.

How is Accor’s luxury portfolio in India shaping up?

There is a second Raffles planned in Jaipur, and a Fairmont in Mumbai is under construction. We already have Fairmont Jaipur, which did rather well even in 2020 because of the several weddings hosted at the hotel. Rajasthan is a vibrant market for resort hotels, while Mumbai still has space for a few luxury hotels. It is a good market, and areas such as Sahar hold promise for luxury hotels because of their proximity to the airport.

Also read: Wedding trends in the time of Covid-19

A global chain and a loyalty programme will play a key role in attracting luxury customers. Some stay only at Raffles and will travel to different destinations that boast one. Others stay at a brand such as Raffles on the back of the points they can leverage under our newly renewed Accor Limitless loyalty programme. While most luxury hotels were once dependent on foreign travellers, now they are attracting sophisticated domestic travellers who have experienced luxury globally and are willing to pay for it.

Accor’s portfolio of luxury and lifestyle properties is large. We have acquired lifestyle brands such as One Fine Day, Mantis, twenty five hours hotels and Mama Shelter. I genuinely believe India is a big market for lifestyle hotels. There are well-travelled millennials who appreciate design-led, experience-led boutique hotels. This has been our learning from ibis experience, Accor's design-led economy brand that set new standards in the branded economy hotel space. We will leverage that experience to bring in boutique hotels in the mid-market segment for evolved travellers, who appreciate affordable design hotels,

What is the challenge that India faces when it comes to attracting luxury travellers?

India attracts more luxury travellers than the mass segment travellers, who head to countries such as Vietnam, Thailand and Hong Kong. We have a large portfolio of luxury hotels, from Oberoi’s Vilas hotels such as Udaivilas and Rajvilas to IHCL’s palace hotels, and Accor’s Fairmont and now Raffles. They fill the lacunae of tourism infrastructure in India by curating interesting experiences and offering luxury and comfort that is world-class.

Unfortunately, the number of luxury tourists who come to India is rather small. A lot of that has to do with the tourism infrastructure in the country. I was in Varanasi over the Republic Day weekend and while it has a very good airport, a foreign tourist can feel somewhat overwhelmed because of the absence of trained tour guides, tourist offices and proper signages. I visited sites that dated to the times before River Ganga came to dominate the landscape and culture, but no boards were indicating this vital fact.

Odisha is one of the few Indian states that are following a dynamic tourism policy. We talk about beaches in Thailand, but Odisha has better beaches. Yet, Thailand attracts the cream of the world travellers.

A few months ago, there was hope as India was opening up. The last few months have proven to be far worse than we had imagined. How do you look at the prospects of the Indian hospitality industry?

The pandemic has been more unpredictable than anything we have witnessed before. The intensity with which the second wave of the virus hit us was unexpected. But we know better now, and the only way forward is to be better prepared. The recent decline in the number of cases is supportive of the fact that the situation is slowly easing off.

The hospitality industry is resilient, and we will face the future as it comes by being more cautious. Taking cues from other parts of the world that are gradually opening up, we can say that vaccinations will be the foundation of recovery. While many travellers will still have their set of reservations, we can expect better days as the vaccination drive in the country strengthens.

In situations like these, how do you see the staycation/workcation/small wedding segment performing?

Staycations, workcations and small weddings are stepping stones to recovery in our experience. Soon after the first wave subsided, these were the three trends that became quite prominent, and we can expect to see the same pattern this time around as well.

To break the monotony of staying cooped up at home, people will move out for same-city staycations or workcations. Staycations are the building blocks that offer more confidence to guests to travelling for longer periods once they have the assurance that they are safe.

The availability of a variety of Food & Beverage (F&B) experiences, the ease of plug-and-play, and a change of environment will be factors that will lead guests to check into hotels for workcations. Weddings as a segment will continue to see traction, as we saw last year as well. The demand for small weddings will stay, especially in a country such as India, where they are firmly entrenched in the culture.

If hoteliers were to innovate, what would be the new revenue stream they will look at?

There is ample opportunity for innovation on the F&B front, a lot of which we have seen in the recent past as well—dark kitchens, food delivery, DIY kits, and such. There is a demand for chefs personally preparing a meal for a private gathering of ten or so people within the comfort of their homes.

A recent innovation at one of our hotels, the Grand Mercure Bengaluru at Gopalan Mall, in consonance with the second wave, is the launch of the Care Dabba. Essentially it is a subscription meal service that provides wholesome and nutritious food at a subsidised price to people who are under quarantine and not in a position to cook.

Other revenue streams are dependent on different factors, for example, laundry services for people living in the vicinity of our hotels, or even small businesses that could include pick-up and drop, or converting meeting rooms at the hotel into offices that could be rented out to start-ups.

Do you think hotels in India should offer special packages to fully vaccinated people to attract them?

The majority of the population is still struggling to get access to vaccines. However, the hospitality industry is looking at innovative ways to attract business, considering how hard it has been impacted by the second wave.

So yes, once the status of vaccination is stabilised and a good percentage of the population is vaccinated, hotels could consider that as an opportunity to get creative and attract fully vaccinated customers. Having a greater number of fully vaccinated guests would also keep the hotel staff and other guests feel safe.

Initiatives such as ALLSafe, Accor’s intensified hygiene and prevention measures, a programme developed by Bureau Veritas, will further help us to attract more travellers. It consists of 200 standard operating procedures that ensure cleanliness and safety and is at the centre of all policies.

Which markets do you see performing well as we open? Will the leisure market endure?

With progressive unlock in phases, we have noticed progress in markets such as Mumbai, Delhi and Ahmedabad, and the trend mirrors in the performance of our hotels in these cities. When it comes to resort properties, our hotels in Goa and Jaipur are still in a state of lockdown, but we do foresee good demand for them once things ease out.

Even our city hotels are implementing leisure models. Novotel Chennai OMR, which had business from the IT industry at its core, went through a major downturn. So the team put cricket nets on the sprawling grounds and created infrastructure to play soccer and basketball. Suddenly, the hotel became very attractive for people living around it as well as those interested in blending a day playing sports with a staycation or a weekend away from home. 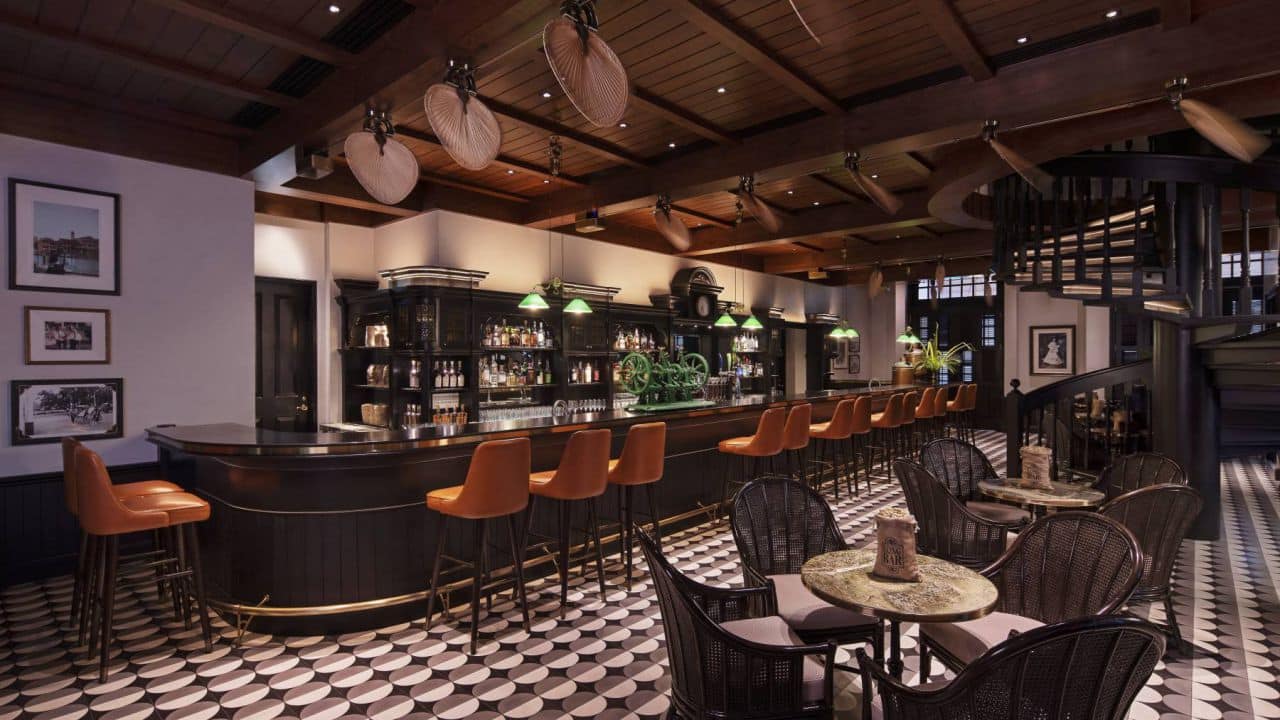 Long Bar at Raffles Singapore. Raffles Hotels debuted in Singapore in the early 1830s, and now have 15 iterations across the globe.