Upcoming Event:\Option Writing Masterclass by Shubham Agarwal: a session power packed with lots of intelligence and tactics required to sell write options, on 13th July at 5pm. Register Now
you are here: HomeNewsTrends

In Depth | Rajasthan shows the way with first Right to Health draft bill; may have lessons for the country

A Right to Health bill at the central level may still be in the works, but a draft bill in Rajasthan that proposes to hold the government accountable for providing affordable and easily accessible healthcare for all citizens has garnered attention across the country.

The draft bill promises free consultation, drugs, diagnostics and emergency care at all government hospitals to Rajasthan’s 80 million people. It makes Rajasthan the first state in India to propose a guaranteed right to healthcare to its residents.

The bill was placed in the public domain recently for stakeholder comments and feedback, which are being incorporated in the draft before it is presented in the state assembly.

Rajasthan chief minister Ashok Gehlot had promised the right to healthcare ahead of the state assembly elections in 2018. Extensive consultations for the draft bill started soon after he was elected. After disruptions caused by the Covid-19 pandemic, the draft bill was published on March 8 and stakeholders were invited to share their feedback.

“While on the one hand, the pandemic delayed the work on the draft bill, on the other, it also necessitated its progress as this massive public health emergency exposed the chinks in the healthcare system nationally,” said a senior official who was instrumental in drafting the Rajasthan bill.

At the heart of the draft bill, according to state authorities, is the government’s intent to commit to quality and affordable healthcare services through fully functional and easily accessible government and private healthcare providers.

Rajasthan was ranked 16th in terms of overall health performance among 19 large states in Niti Aayog’s health index for 2019-20.

“Our bill empowers the common citizen to seek various healthcare services and shows how committed the government is to make healthcare accessible and affordable,” a state health department official said.

The first draft of the bill has seven chapters that include the rights and duties of citizens, obligations of the government, and constitution of state and district health authorities and grievance redressal mechanisms.

“This bill is important because even though it may not be sufficient in itself to bring about changes in the healthcare landscape without filling gaps in resources, at least it makes the government accountable,” said a specialist attached with the World Health Organization in India.

In practice, the specialist added, citizens can enforce that accountability and take the government to court if it fails to fulfil its obligations.

“To my mind, there are many lessons in the Rajasthan bill for other states as well as the Union government,” the specialist said. 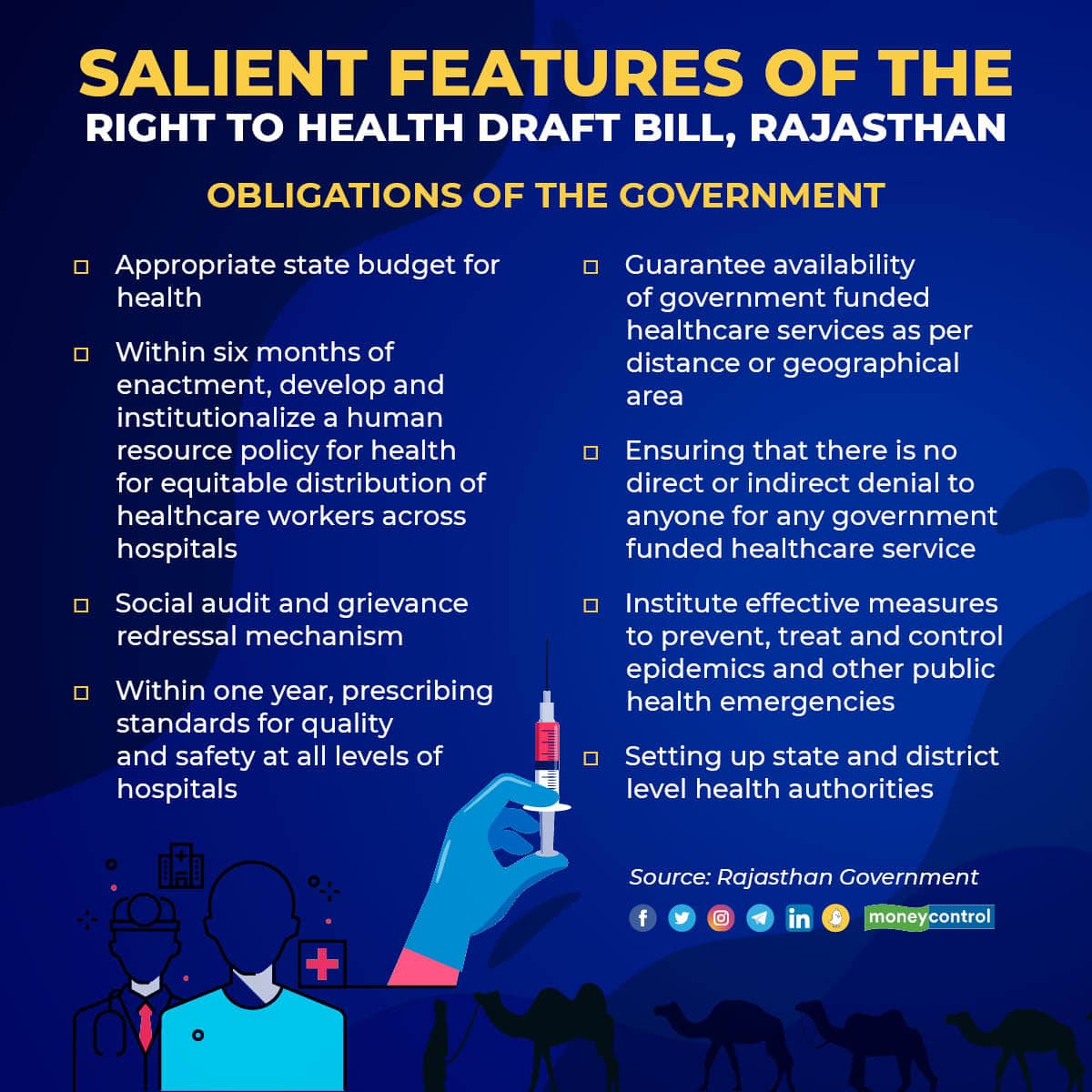 In a country with high dependence on the private sector for health services, the draft bill may have come as a breather.

However, Chhaya Pachauli, director of voluntary group Prayas, pointed out that many clauses in the draft bill were open ended and vague. The proposal to make healthcare “accessible to all” lacks specifics, she said.

“Basic primary care should be available within half an hour of walking distance, comprehensive primary care within 12 km, secondary level care within an hour’s distance by motorised vehicle and tertiary care within 150 km,” she said. “Without specifications to all the rights proposed, the bill won’t be able to lead to any substantial improvements in healthcare delivery.”

Prayas, which participated in the consultative process ahead of the drafting of the bill, has sent a 30-page document with suggested changes to the state health department.

“We are aware of the changes being demanded, but all those can be incorporated in the rules and descriptions after the enactment,” the official said.

“The draft law in its present version fails to clearly define mechanisms that are required to make it effective,” he said. “Also, in my view, there is no place for duties for citizens in a right to health act, but the draft proposes many of them.”

One clause proposes that residents can avail tertiary healthcare services after a referral from a primary and secondary level institution or service provider.

“It should be the duty of the primary healthcare provider to arrange for a patient’s treatment at a tertiary care centre, if that’s the requirement,” said Sundararaman.

He pointed out that the bill defers critical issues such as human resources in health, finance and organisational matters and does not propose to regulate the private sector to protect the people from malpractices and exploitation.

While the bill itself is seen as ambitious, state officials said finance should not be a major problem because it was largely about fixing the gaps in existing healthcare facilities.

“We already have primary, secondary and tertiary care centres present across the state, but the idea is to make each one of them so robust that no patient is ever denied the rights we are committing to,” an official said, adding that the cost estimate will become clear only when a financial outlay is prepared.

In the state budget for 2022-23 in February, Gehlot doubled the health insurance cover to Rs 10 lakh per family in a year. While setting aside Rs 3,137 crore for healthcare in this financial year, the chief minister said in-patient and out-patient services will be totally free of cost in state-run hospitals.

Health of the state

The state of Rajasthan’s health is mixed. While Niti Aayog’s Health Index, released in December, ranked Rajasthan 16th, the report also said the state had improved in terms of neonatal mortality rate, under-5 mortality rate and tuberculosis success rate over the previous year.

However, on overall health outcomes, the western state scored about 30 points and was ranked 17th while Kerala, the top performing state, scored over 99.

At the Central level, a right to healthcare bill was drafted during the United Progressive Alliance government days but it was never put out in the public domain.

More recently, the government think-tank Niti Aayog entrusted OP Jindal University to draft a bill. A version of the draft Central bill was circulated among a select few late last year and is yet to be released publicly.

One clause stated that no individual will be traced or otherwise subjected to surveillance without their explicit, autonomous and informed consent. The draft also laid down guidelines for the safety, security and working conditions of healthcare workers.

Another clause proposed that within six months of enacting the bill, health councils from the village to the national level will be formed. These councils would ensure community participation in healthcare delivery.

Among the states, the Tamil Nadu government is working on a health policy and a right to health bill.

Ameer Khan, a public health expert in the state who is associated with Jan Swasthya Abhiyan, the Indian chapter of the People’s Health Movement, said the state government had demonstrated the “political will” to give health the priority it deserves.

“There has been one consultative meeting over this bill yet and it may take some time, but it looks like the first draft of the bill will be ready by the year-end,” he said.