New York-based award-winning choreographer and performer Preeti Vasudevan has made Bharatanatyam relevant and relatable for a global audience through her work.

What Preeti Vasudevan misses most about India is the multi-generational sense of home. The award-winning New York-based choreographer and performer sorely longs for “that sense of an ongoing story and perspective” for herself and her 10-year-old daughter that only living with parents, grandparents, uncles and aunts can give you.

And so Preeti took a little bit of home to New York.

An exponent of Bharatanatyam, Preeti has made a niche for herself by creating new provocative contemporary works from the Indian tradition adapted for a global audience. Her love affair with dance and choreography began in her teens.

Raised in Delhi, Chennai and Bengaluru, she lived briefly in Indiana in the American Midwest before she moved to London to do her Master’s in dance studies from Laban Centre.

Later, she qualified as a certified movement analyst from the Laban Institute of Movement Studies in New York, and began a new life in the dynamic city.

In 2005, she set up Thresh, a performing-arts collaborative. With its vision being to educate and entertain, the team has earned international acclaim for their fresh juxtaposition of traditional and contemporary voices.

“It’s an experimental platform to bring in global artists. The aim is to provoke topics of identity,” says Preeti, who has done much thinking on this subject.

“When you’re moving around in a globalised world, the question of ‘who you are’ becomes a big deal. In a country like the US, for instance, people want to define you in a certain way, and you may be coming from a country where you never encountered those definitions. Like, I may grow up listening to rock music in India but if I tell someone in the US that I grew up listening to rock music in India and have no knowledge of Indian classical dance, they would be shocked. People assume certain things about you.”

Part of her work with Thresh is related to representing India to the Western world. “It’s important to see the country as a growing culture, and not to be stuck in a culture bubble or time freeze,” she says, narrating how immigrants often hold on to older Indian value systems after leaving, not realising that Indians and their values have changed.

“I want to break this. I have been lucky to be able to travel between India and wherever in the world I have lived, so I have never felt disconnected from the changes taking place in India. I am able to bring in a global perspective to my performances and work.”

In fact, Preeti makes it a point to work frequently in India so that she can stay “intimately connected” with her roots. Her parents still live in Chennai. 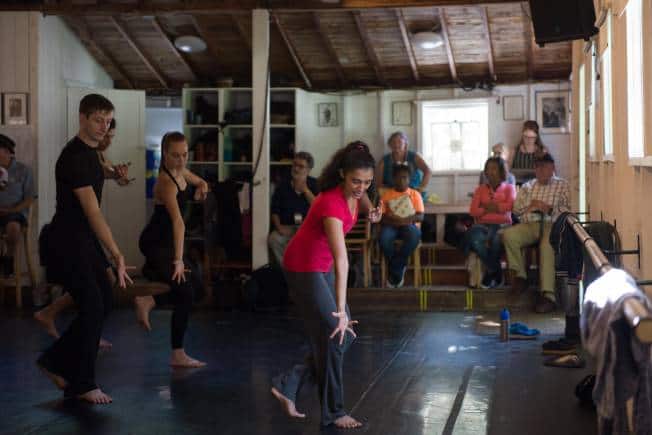 With a string of awards under her belt, she has performed at the Metropolitan Museum of Art, National Dance Institute, The Chamber Music Society of Lincoln Centre, besides at several locations in India.

But what Preeti loves most is to be able to share the depth and wisdom of Indian classical dance with young people from around the world. Besides theatrical performances, she is also an educator who works with institutes and groups to bring the joy of dance to as many lives as she can.

She created a ground-breaking educational website, Dancing for the Gods, in collaboration with the Department of Education, NYC, to build a cultural bridge through creative Indian dance for New York’s public schools.

The pandemic and its associated lockdowns in New York put a halt to the work Thresh had been doing. To continue, they had to go digital. “Storytelling is the very essence of my work,” says Preeti, who decided to launch a digital storytelling initiative to keep children entertained at home while also educating them about universal tenets.

Called the Red Curtain Project, Preeti’s videos inspire children to see connection and unity between cultures, while also encouraging them to live by positive principles. The subjects she takes up are contemporary and very relevant for a globalised world. For instance, a video made for Diwali called Lights for Gita, based on a children’s book by author Rachna Gilmore, shares a meaningful message of what it means to dispel darkness and find true light within each of us, and how we can make new homes in unknown countries.

While Preeti performs the narrative herself – in front of a red curtain, naturally! – the project is a completely collaborative effort. In Lights for Gita, the illustrations have been done by Harsha Biswajit who currently lives in Barcelona, while the music has been composed by New York-based pianist Charu Suri, the first Indian-American jazz composer to premiere an evening of work at Carnegie Hall last year.

In each video of the Red Curtain Project (14 so far made during the lockdowns), there are detailed explanations of the mudras or gestures used by Preeti in the narration, along with their Sanskrit names in Indian classical dance tradition.

For Indian children abroad, the videos offer a doorway to access their country’s rich cultural legacy, while for children of other cultures, the videos are an introduction to the colour, depth and wisdom of Indian classical dance heritage. All this while leaving them with a meaningful lesson in personal growth.