The Tippling Point | Stories to warm the heart this Christmas

Four delicious (and historic) alcoholic drinks to try on your travels through Europe when commercial flights restart, and stories about these drinks that you can relish in the meantime.

(Representational image) When in Belarus, try Krupnikas which is made with honey, spices, water and high-proof grain spirit.

It's Christmas again! The world hurries on to revel in the season before omicron, the latest variant of the Covid virus, catches up to spoil the celebratory mood. Well, where to go and what to sip to drown out the year's fatigue?

We begin this journey from Romania.

As the wings of darkness spread in the valleys of Transylvania, home to one of the shadiest creatures in the fictional world that have terrified readers around the world, you desperately want to gulp down something from a rustic shack on the roadside to fight the nip in the air and also that queasy feeling now burgeoning in your stomach. See, how the imposing outlines of the Carpathian mountain range tower against the gloom! What about a shot of țuică?

Tuică is a Romanian spirit with 24-65% alcohol that locals prepare from plums (mind it, Romania is the largest plum producer in the European Union).

Preparation of țuică begins in early October (with an eye to using it as a Christmas drink) when plums are left to ferment in large barrels. As it is produced locally, people distill it once or twice according to their preference for strength. Though țuică can be consumed immediately after distillation, some let the spirit sit inside barrels from six months to 10 years to forge some class and also a strong aroma.

The drink shouldn't turn white as you pour it into shot glasses.

Normally, țuică is used as an aperitif that builds a healthy appetite. If it is potent enough a shot or two will get you into the zone, eager to celebrate Christmas. Romanians can't imagine religious holidays, family reunions, birthday parties, baptisms, wakes without the presence of this plum spirit. 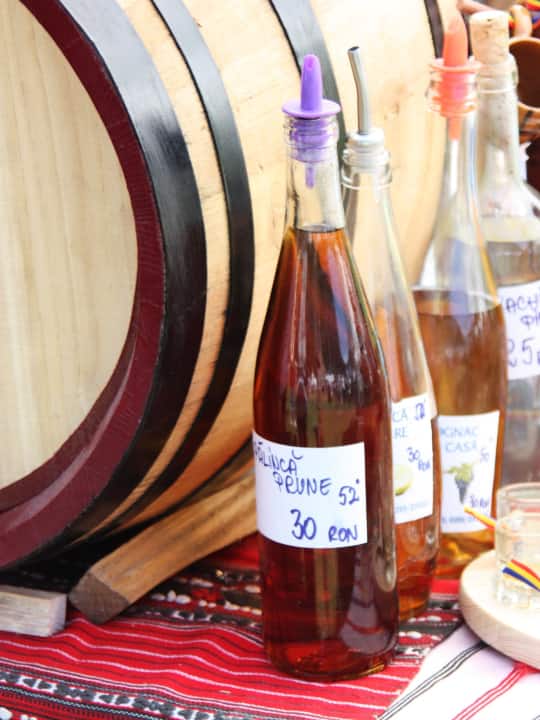 Tuica is made from plums, and can have anywhere from 24% to 65% alcohol. (Photo via Wikimedia Commons 3.0)

Well, you want to exhibit your political stance in whatever you do, show that indelible maverick sheen latent inside even in the drink you sip on Christmas. Where to go?

Welcome to France. Here is a glass of Kir Royale to your indefatigable spirit.

Canon Felix Kir was a catholic priest and also the Mayor of Dijon, France, when the Nazis turned up in the country to show their ugly side. It was the beginning of the World War. Our hero fought not only by aiding many prisoners to escape from a local concentration camp, but he also dared to invent his own cocktail as an act of resistance when the Nazis garroted the celebrated French spirit industry by confiscating all their red wine.

Kir created two cocktails - Kir, by mixing a dry white wine distilled from Aligoté grapes with the local black currant liqueur, and Kir Royale, the more expensive one (and ideal for Christmas), by replacing white wine with Champagne. The latter is more sweet and fizzy.

When the war was over, France honoured our priest with Legion d’honneur. Kir continued to serve as mayor of Dijon until his death in 1968.

What began in the 17th century as a sweet alcoholic drink in the Benedictine monasteries of what is now Belarus had a tryst with destiny.

Today, there are as many recipes for Krupnikas as there are makers across a large region that cuts across Poland, Lithuania and Belarus. Few know how exactly the warm, sweet and spicy honey liqueur found its way to Lithuanian homes to become part of their tradition.

Only basic infrastructure - a pot and a stove - is needed to make Krupnikas.

Locals usually boil down honey, spices and water before adding a high-proof grain spirit to the mix. With more than 50 different herbs, makers have so many buttons to tweak to create the exact timbre and character of the final drink.

Once the concoction is strained and bottled, this mulled vodka with the tang of spices tastes like pure manna in your mouth (thanks to all that clover honey that goes into it). Usually, it is during the cold months that run up to one of the greatest religious celebrations of the world that Lithuanians, in the calm of their homes, flip open their bottles to sip blissfully from them.

A ski lodge in Lombardi, Italy. Four skiers could do nothing else on that day when hellish weather confined them indoors. What do you have that could lift our spirits? The man at the counter was a former soldier who opened the lodge when he retired. He smiled and fixed a drink by adding brandy to zabaglione (an Italian sweet made of whipped and heated egg yolks, sugar and Marsala wine).

It's truly a bomb that could split any bad weather into smithereens! The Italian Bombardino was born. It is popular, especially in winter. Christmas included. Nowadays, bombardino is made with half-part Advocaat or eggnog and half-part Brandy.