It's saffron harvest season in Kashmir, a time for intense work and a few grievances

Saffron yields have been falling, say Kashmiri saffron growers. Add to that pressures from cheaper varieties of saffron from Iran and Internet shutdowns, and business is not as vibrant as before.

Kashmiri saffron is harvested just once a year, from late October till mid November. (Photo by Irfan Amin Malik)

Pampore: On the Jammu-Srinagar National Highway near Pampore, purple swathes of centuries-old saffron fields scatter their fragrance on everyone and everything around.

It is late autumn in Kashmir, and villagers around Pampore - also known as the saffron town of Kashmir - are picking the delicate flowers to fill their wicker baskets.

Kashmir’s saffron (Crocus Sativus Kashmirianus), known for its flavour and colour, is harvested just once a year from late October till mid November. Saffron has many uses in industries such as food, pharmaceuticals, cosmetics and perfumery as well as in the textile dyes. 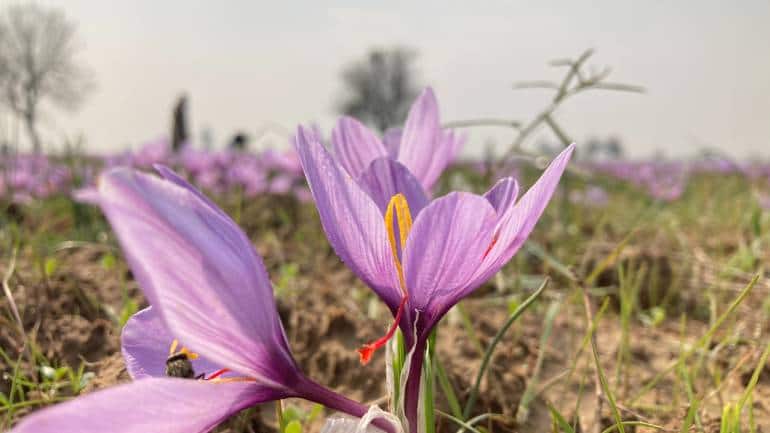 Kashmiri saffron got a GI tag in July 2021. (Photo by Irfan Amin Malik)

Pampore has a table-land (Wuder) in and around which the saffron is grown. During harvest season, men, women as well as children perform the tasks of plucking the saffron flowers, hand-picking and placing the crop on white cloth, and drying the stigma and stamen.

Kashmir is considered to be one of the top three regions in the world for cultivating saffron. Historians say saffron or Zafran (as it known in Arabic) has been cultivated in Kashmir since at least 500 BC.

Saffron harvest season in the Valley is usually like a festival. But over the past two decades, the zeal of growers has sharply reduced due to dwindling production of saffron.

According to saffron growers and agricultural experts, climate change, poor irrigation, failure of the National Saffron Mission, political instability, pollution caused by adjoining cement factories, traditional farming practices, urbanisation and imports of the cheaper Iranian varieties of saffron pose a threat to the future of the cash crop. 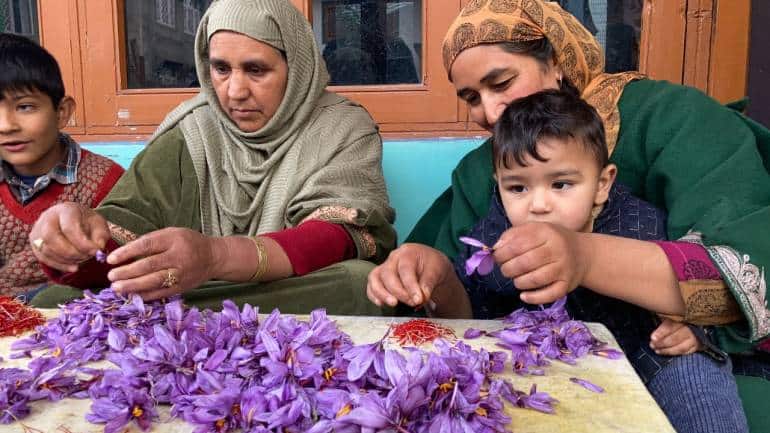 Sixteen-thousand families in Pampore depend on the local saffron industry. (Photo by Irfan Amin Malik)

Since 2000, saffron production in J&K has been falling continuously, and if the trend continues, growers in the four districts—Pulwama, Budgam, Srinagar and Kishtwar—where most of the saffron is planted, could lose a crucial source of livelihood.

In Pampore, more than 16,000 families are directly dependent on saffron for their livelihood. Census 2011 showed that approximately 11,000 women in the Kashmir Valley are associated with the saffron farming sector.

Abid Nabi, 30, grows saffron on 16 kanals (2 acres) in Lethpora town, some 24 km from Srinagar. He also sells Kashmiri saffron globally online. Nabi says: “In 1990, on our 16 kanals of saffron land, the yield was 15 kg, and currently we are able to produce only 4 kg.”

Official figures reveal that saffron crop was being cultivated on 5707 hectares of land at Pampore in 1996, which had shrunk to around 3500 hectares by 2017.

Sitting inside his saffron showroom, Kesar Valley Emporium, Nabi adds, “Low yield of saffron is no doubt a major challenge, but frequent internet shutdowns and political instability in the region have (also) hit my business. For instance in August 2019 when government scrapped Article 370, special status of J&K and the whole region suffered communication blackout, I could not receive or deliver orders.” 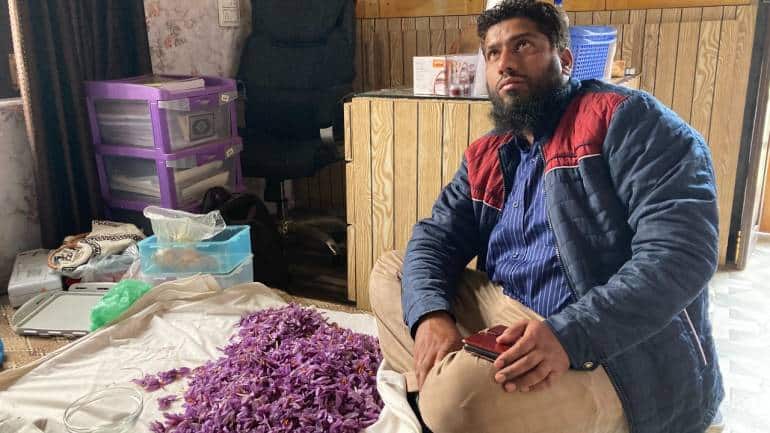 Sameer Ahmad, 28, of Lethpora town, another saffron grower, says his 25 kanals of land only yielded around 3 kg of the crop this season, down from 20 kg 15 years ago. “The dwindling saffron production has made us hopeless about the future of this industry. Over the years, many farmers have turned their saffron fields into apple orchards because apples require less water,” he tells Moneycontrol.

Too much or too little rain

For decades, Noor Mohammad Bhat’s family has cultivated saffron in the Karewas (highlands) of Pampore.

Sitting on the floor of his house along with his family members and surrounded by sacks of saffron, Bhat’s son Firdous Ahmad Bhat tells Moneycontrol: “Our saffron fields used to be like goldmines but not anymore. One or two spells of rain in September and October are significant for the saffron. But in most years mainly after the year 2000, it either hasn’t rained in these months or has rained too much.”

Bhat, who also prepares and sells saffron Kehwa in his shop, worries that the art of growing saffron is disappearing. 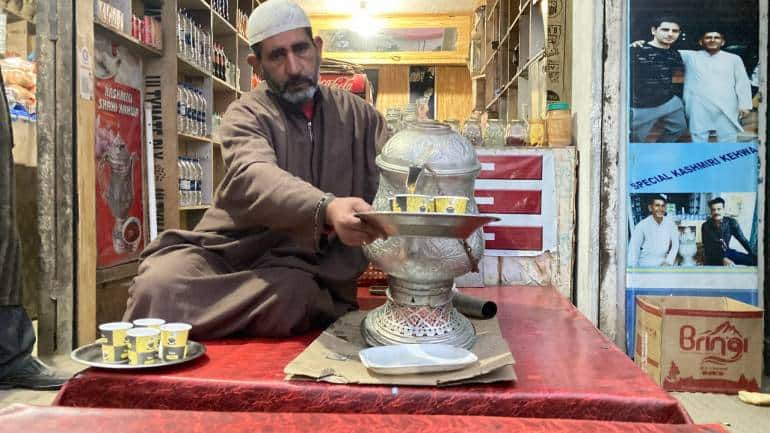 Also called kesar, Zafran or Kong Posh, saffron is added to traditional dishes served during special occasions such as marriages. Each kilogram, as per retailers, costs between Rs 3 lakh and Rs 4 lakh, depending on the market.

Last year the saffron production crossed 13 metric tonnes for the first time in the last 10 years. Nearly 13.36 metric tonnes of saffron was produced last year, as against 12.495 metric tonnes in 2019.

Despite the timely and adequate rainfall during the past two seasons, most of the saffron fields still have sporadic flowers with large distances between the plants, indicative of poor produce.

Though the government had implemented a sprinkler irrigation project—under the National Saffron Mission—some 11 years ago to help combat sporadic rainfall when the saffron crop needs it the most, growers say the mission has not served this purpose. The saffron is removed and dried in multiple steps. (Photo by Irfan Amin Malik)

The National Saffron Mission was aimed at employing scientific techniques to rejuvenate saffron bulbs, as well as to provide groundwater irrigation through borewells and sprinklers, power tillers, and a high-tech saffron park with mechanised processing facilities.

“Despite laying pipelines and digging wells...they are of no use. If they had any utility, our saffron fields would have been irrigated,” says Nabi.

“Out of the proposed 128 borewells (under the National Saffron Mission), the government has commissioned 80," says Srinagar-based micro irrigation specialist Rakib Yousuf. "But the question is who will take care of these borewells once they are fully installed? A grower has to bear various charges ranging from employing labourers to diesel cost which is why I do not see the future of saffron mission,” says Yusuf, CEO, Biocare Techno-Solutions, a water management company.

Pollution and other problems

Growers also allege that the cement factories in the area have wreaked havoc on saffron cultivation. “The cement factories emit one lakh kilograms of toxic fumes per day... Cement factories also do not have filter bags to check the emission of dust, which settles on everything, including the saffron fields,” said a grower in Khrew area of Pampore.

Low yields in Kashmir have pushed some sellers to procure Iranian saffron to meet demand. “Selling Iranian saffron in Kashmir is no doubt a shame but sellers do not get adequate crop, due to which they rely on Iranian variety,” says a seller on the condition of anonymity.

Iran grows 90% of the world's saffron. Most of India's saffron, roughly 5% of the world's produce, is cultivated in J&K. Greece, Afghanistan, Morocco, Spain and Italy also produce saffron in very small quantities. 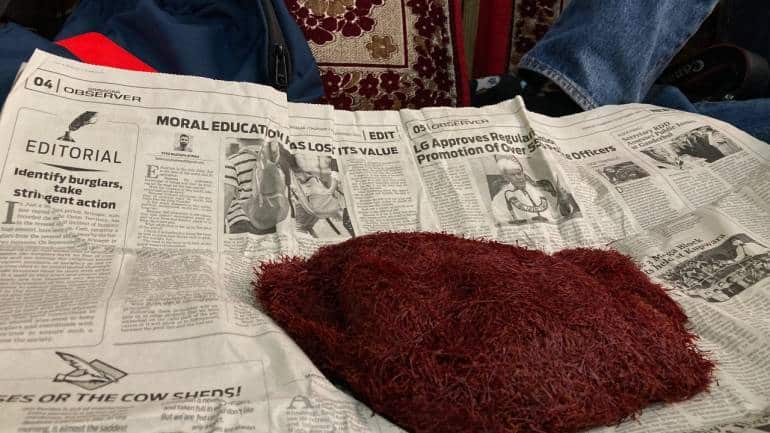 There are three types of Kashmiri saffron: Mongra, Lacha, and Zarda. (Photo by Irfan Amin Malik)

Another problem for Kashmir's saffron industry is the market for cheap, ‘fake’ saffron – either chemically manufactured or ‘cut’ with additives to increase its weight – has dealt a major blow to Kashmir’s heritage crop.

“In (July) 2020, the government provided Geographical Indication (GI) tag to Kashmiri saffron, making it illegal for someone outside the Valley to sell a similar product under the ‘Kashmiri saffron’ label,” says Abdul Majeed Wani, president of the saffron growers association of Kashmir.

However, many growers argue that the GI tagging has been provided only to the saffron produce which goes to Indian International Trade Saffron Spice Park Dusso Pampore. “Those farmers who themselves process and sell their produce are not provided the GI tagging. Their produce still goes in the markets without the GI tag, making their crop vulnerable to adulteration,” says Nabi.

“Kashmir saffron is famous worldwide due to its very high crocin and safranal content,” Salmani says.

Salmani explains that there are three types of saffron: Mongra, the costliest and finest; Lacha, the second costliest and purest one; and the third type is Zarda, the tail part, which is least expensive.

To boost saffron's cultivation and export, the government had established a high-tech spice park in Pampore. However, few farmers bring their yield here. “During the previous year, 250 farmers brought their yield to spice park compared to 1,100 this year,” Salmani.