Do your homework, know what you need from a negotiation: Major General Rajpal Punia

"When you are in a situation where you feel that you have lost everything, that’s when you feel that things can only improve from here, whatever you do, and that's what I did. I adapted many times."

The context: Political unrest and corruption had birthed a rebellion in diamond-rich Sierra Leone in 1991. Led by an ex-army sergeant Foday Sankoh, the Revolutionary United Front (RUF) had come to power on the back of promises that it would share a larger portion of the nation’s mineral wealth with its people. In 1999, an agreement - the Lome Peace Agreement - was signed to end hostilities and enable power-sharing between the government and RUF. Under the agreement, the RUF were to lay down their weapons to a neutral force like UN Peacekeeping. And that was the reason for Major General Punia and his team to fly to Sierra Leone. 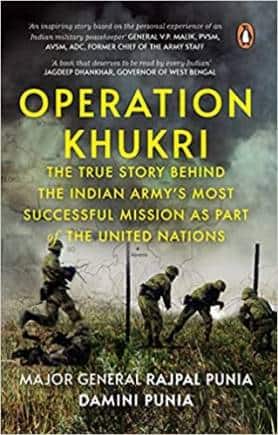 Major General Punia has recorded the events of this 21-year-old mission in a book he has co-authored with his daughter, Damini Punia. Titled Operation Khukri: The True Story Behind the Indian Army’s Most Successful Mission as Part of the United Nations, the book recounts how the Indian contingent tried to get the job done, and how the officers and men survived for 75 days when things went horribly wrong.

“Primarily, this book is about survival. This book is about the art of diplomacy, when you have to survive,” said Major General Punia in an interview to Moneycontrol, a day before the launch of the book - the book launched on July 15, 2021 - the 21st anniversary of Operation Khukri.

Edited excerpts from the interview with Major General Punia and Damini Punia:

In your career in the Army, you've had to make split-second decisions that were very high-stakes. Before I ask your advice on how to build up some of those capabilities - to consider the different possibilities and act quickly in stressful situations - please tell me about your new book, ‘Operation Khukri’.

Major General Punia: Being in the army, we deal in human lives. So no (other) decisions can be so serious, and have such serious repercussions, as the ones we take in the Indian Army. Especially when we are in operations, our decision-making has to be the fastest and also has to be optimal.

But first, let me share with you what this book is all about. It's about an operation which happened 21 years back. But more than the operation, I think it’s about how we survived for 75 days surrounded by the militants of the Revolutionary United Front (RUF in Sierra Leone).

So, what happened in Sierra Leone?

Major General Punia: We had gone to Sierra Leone as part of the United Nations Peacekeeping Force (in 2000). There were 17 countries representing this corps. The RUF militants were to lay down their weapons to a neutral force (the UN peacekeepers) as part of the Lome Peace Agreement. But a couple of months in, all the peacekeepers were surrounded by the rebels who wanted us to lay down our weapons.

As you know, we in India, we take our uniform as a religion, and the weapon is like God. So there was no question of laying down weapons, and I tried to negotiate with them (the rebels). Of course, Operation Khukri happened in the end.

You started the negotiations?

Major General Punia: We had to survive for 75 days without food. We were in a 100 x 100 metre area that we were holding, with the militants surrounding us. You can well understand what we would have gone through; the kind of stress.

I think that as a young officer, I did my best to negotiate with the rebels. I had 10 to 15 meetings with the Force Commander to put across my viewpoint that laying down weapons does not happen in Indian Army. Rest everything we were ready to do, because we had not gone there to fight; we were peacekeepers. And war as an option should be the last option.

What kind of decisions were you making?

Major General Punia: Every day we had a lot of decisions to make. I will give an example: one of my soldiers was very seriously ill. He needed surgery as his intestine had twisted. I asked for a meeting where I requested the rebel Force Commander that my soldier has to be evacuated to the military hospital. And he told me that he can only do it if I give him a vehicle. So on the spot, I had to make a decision that for me, the life of my soldier was more important. So I gave him my vehicle straight away.

(The soldier got the surgery and recovered.)

I was constantly meeting the rebel Force Commander, moving out of my camp, going out to meet the people. Every time I moved out, it was like “I might not come back”. They could have detained me. So it required tremendous motivation.

I'll be very honest, the rebel Force Commander and I became friendly. We were sharing everything with each other. And it was a friendship where there was genuine concern (for each other). But then he had orders from his hierarchy, and I had orders from my hierarchy. In the end, we had to go through with the operation.

(My choice,) it was between being a soldier and being a human being. I was very sad to go through with the operation because as a human being, I was feeling that I am going to do something which is going to cause a lot of civilian casualties. But I had to do my duty as a soldier.

When I look back today, I wish I had been less of a soldier and more of a human being.

Why write this book now?

Major General Punia: This has been troubling me for the last 21 years - why have I not been able to put down my thoughts, what I had gone through.

I shared this (the story) with my daughter. Last year, when the pandemic started, she had come down, leaving her job. Over a cup of tea, I shared (these memories) with her and she said, “Papa, you must write it”. I said, I don't have time and in case you are with me, together, we will make it into a book. We were not confident when we started. But over a period of one year, we could put down everything.

Damini: When Covid-19 pandemic happened, I came to Patna. Like any other Indian, I thought this is going to last a week, 10 days, and I'm going to go back. But that didn't happen.

There was nothing much that I could do sitting here. So I just went through all the old army boxes. I found this one diary which had letters that our mother had written to him at that point of time (2000); it had the birthday cards that we had made for him - we didn't know where these cards were going; I was four years old then - he had written a few paragraphs here and there, things that came to his mind at that point of time, he had jotted them down. So I took the diary to him. And I was like, you have to tell me about this. What is this diary? What are these letters, because there was one letter that he wrote on 14 July 2000, just a night before the operation - every soldier writes a letter to his family in case he doesn't come back home. The letter gets posted to his house.

So I found that letter. I was very intrigued. I wanted to know more about it. Why did he write this letter? We started talking about it, the conversations led to the pages and things happened organically after that.

Tell me a little bit about the actual writing of the book. Were there discussions around structure and style?

Damini: There were. Initially, especially. We had a few discussions where we initially thought we would probably go in flashback, from present to the past. But then things worked out beautifully, where we started with the Kargil War and ended with Operation Khukri.

So coming back to my question about this decision-making in very stressful situations...

Major General Punia: The routine stress or work stress we have is different from combat stress. (Many years after Operation Khukri,) I did a defence management course where I learnt more about stress, and that is when I realised that combat stress is something unique. What we had (in Kailahun, Sierra Leone) is combat stress. Combat stress suddenly goes up when the situation (incident) happens. Thereafter, it plateaus. So your stress levels suddenly shoot up, and after that the graph is flat for a long time. Once you prolong that plateau, either you will go into serious stress and that's the collapse stage, or you can gradually try to bring down the graph.

(In Kailahun,) initially when the stress went up, my soldiers stopped eating. I learnt from my senior JCO that they were worried about the families and nobody was feeling hungry. I realised that if my soldiers start breaking down under stress, it's going to be very difficult. So I started routine training in that 100 x 100 metres. We started (our day) with physical training classes, then we had weapons training, and planning for an operation. To keep them busy, I used to make them play volleyball matches in the evening.

What I wish to share is that: keep yourself busy when you are stressed. Do not disturb routine activities when you are under stress. That is a very important lesson which I want to share with everybody to beat stress.

You had gone in for a peacekeeping mission. Then some people were killed in firing that you didn’t know about. And suddenly things changed. You had to make decisions without knowing what had happened. How did you make decisions, despite the missing pieces of information?

Major General Punia: About decision making, I do understand that decisions do everything in life; if you want to make money, you make money by taking the right decision at the right time. Timely decision-making is more important than anything else... when I was going to meet the rebel commanders, every time I had to do my homework: (think) what do I want from him?

After I was taken hostage, captured by the rebels, there were two gunmen standing over me (watching me) for 10 days. You can well imagine it was difficult to sleep. I felt absolutely naked - as a company commander, as a soldier. When you have suddenly been stripped; and you have - I will use the word hope - no real hope now with you, that was the starting point. Once you realise something like that, the scope for improvement is 100%. I mean, nothing worse can happen. Now the graph can only go in one direction, things will improve from here, you will bounce back. So that positivity.

...After I was released, I ensured the release of all other officers who were captured by the RUF…

What I'm trying to say is that when you are in a situation where you feel that you have lost everything, that’s when you feel that things can only improve from here, whatever you do, and that's what I did. I adapted many times.
Chanpreet Khurana Features and weekend editor, Moneycontrol
Tags: #Blood diamonds #books #conflict #Damini Punia #Indian Army #Major General Rajpal Punia #Operation Khukri #Revolutionary United Front #RUF rebels #Sierra Leone #United Nations peacekeepers #weekend reads #West Africa
first published: Jul 25, 2021 09:29 pm