The four companies that plan to bid for 5G spectrum together deposited Rs 21,800 crore as earnest money for the auction scheduled to start on July 26

Telecom companies are expected to bid aggressively for the 5G spectrum in an auction later this month, with Reliance Jio Infocomm accounting for more than half of the earnest money deposited by the bidders. In a relief for mobile phone operators, newcomer Adani Data Networks deposited a small amount, indicating that it is not likely to bid fiercely for spectrum.

The four companies participating in the auction for 5G airwaves together deposited Rs 21,800 crore, according to data published by the Department of Telecommunications. Reliance Jio deposited Rs 14,000 crore, followed by Bharti Airtel with Rs 5,500 crore, and Vodafone Idea with Rs 2,200 crore as earnest money.

Based on the points, Reliance Jio can bid for a spectrum worth a maximum Rs 1.27 lakh crore, and Bharti Airtel can bid for a maximum of Rs 48,000 crore of the spectrum, Vodafone Idea for Rs 20,000 crore, and Adani Data Network Rs 700 crore. The companies may choose to bid less than this amount. 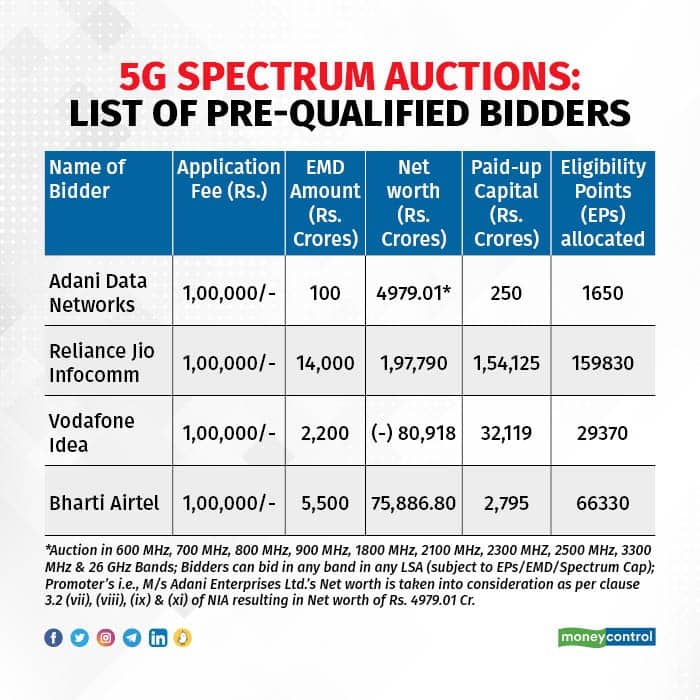 Adani Data Networks deposited Rs 100 crore. The company said earlier it wants to set up a captive network for its own establishments and has no plan to enter the consumer mobility segment.

With the amount that Adani has deposited, it can buy spectrum worth Rs 700 crore, which means its bids may be limited to the 26 GHz band a few circles. This may give the telecom operators some relief as they had expected the Adani Group to bid fiercely for the 5G spectrum.

The auction of 5G airwaves is scheduled to start on July 26. The government is expected to garner Rs 80,000 crore to Rs 1 lakh crore as revenue from the sale of the spectrum, which supports wireless internet access at a much higher speed than the current 4G communications standard.

Aseem Manchanda is a senior economic journalist, currently working with CNBC-Awaaz as an Associate Editor. He also contributes to MoneyControl.com, a leading business portal, on economic issues. His last stint was as Bureau Chief with Zee Business. He has spent over 16 years working with mainline news channels, including India TV, Zee News, and BBC World. Manchanda is an expert on the telecom industry, having extensively covered it both from the policy side and the corporate sector. However, he has also worked in almost every area of television news, covering issues that range from economic and political to international. He has two Masters’ degrees under his belt—MBA in International Business from IMT, Ghaziabad, and in Journalism & Mass Communication from IMS, Noida.
Tags: #5G Spectrum #5G spectrum auction #Adani Data Networks #Bharti Airtel #reliance jio #Vodafone Idea Limited (VIL)
first published: Jul 18, 2022 04:37 pm