Despite all the backlash from President Trump's administration, Huawei persisted and have finally taken the lid off its Mate 30 series. The Chinese smartphone giant just added three new handsets to its flagship Mate series - The Huawei Mate 30 and Mate 30 Pro, and the pick of them all, the Mate 30 Pro 5G.

Before we get into the specs, you have to understand that the Mate 30 series will ship with the best-in-class hardware and without proper Android support.

So, let's take a deep dive into the specs of all three Mate 30 models.

The Mate 30 Pro is equipped with the most impressive camera hardware you'll see on a smartphone. Not only does the Mate 30 Pro get the 40-megapixel Super Sensing camera we saw on the P30 Pro, but it also gets a 40-megapixel ultra-wide lens, what Huawei is calling a Cine Camera. Both cameras can utilise the 3D ToF sensor to render bokeh in videos. Moreover, there's an 8-megapixel telephoto lens on the Mate 30 Pro as well.

Both the Super Sensing and Telephoto sensors have Optical Image Stabilisation. The telephoto camera on the Mate 30 features 3x optical zoom and 5x optical hybrid zoom. But the cameras aren't just good for photography. Video recording capabilities of the Mate 30 Pro are equally impressive. You can shoot videos at 60fps in 4K resolution. For low light recording, the video camera can go up to ISO 52,000.

The Mate 30 Pro's 40-megapixel Super Sensing camera features an f/1.6 aperture, while ultra-wide sensor with a 3:2 aspect ration is fitted with an f/1.8 aperture. Lastly, the telephoto camera has an aperture of f/2.4. On the front, the Mate 30 Pro gets a 32-megapixel selfie camera that sits on the wide notch on the top along with the 3D scanning hardware.

We just took gestures to a whole new level.
Command your phone without even touching it, with smart gesture control.
See the magic happen with the #HuaweiMate30 Series#RethinkPossibilities pic.twitter.com/Df3JoXLGDS

Moving away from the camera, the Huawei Mate 30 Pro's Kirin 990 mobile platform is built on a 7nm+ EUV process with powerful Mali-G76 MP16 GPU, making the phone a mobile beast. Huawei's latest flagship sports a 6.53-inch FHD+ OLED panel, what Huawei is calling a "Horizon Display". The extreme curvature on the sides of the screen is similar to what we saw on the Vivo Nex 3. The display also supports HDR and full coverage of the DCI-P3 colour gamut.

The extreme curvature leaves no room for buttons on the side, so Huawei has added virtual buttons for everything from adjusting the volume to a camera shutter key on the display. The Mate 30 Pro runs EMUI10 on top of Android 10, but more on that later. Huawei's Mate 30 Pro pushes the boundaries of battery life with a 4,500 mAh battery with support for 27W wireless fast charging and 40W wired fast charging. Apple's 18W fast charger bundled with the iPhone 11 Pro isn't looking so good, is it? The Mate 30 Pro is also IP68 water-resistant. 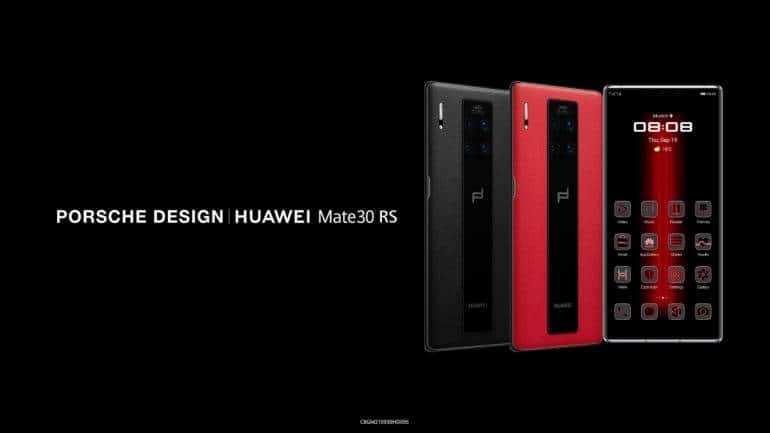 The pre-orders for the 4G version of the Mate 30 Pro have already begun in China, while shipping will commence on the 28th of September. The phone is expected to launch globally somewhere in October.

There are quite a few differences between the Mate 30 and its Pro counterpart, and it is a good thing Huawei is making no attempt to hide them. The Mate 30 gets a larger 6.62-inch FHD+ OLED panel with the same HDR10 support and DCI-P3 coverage as the Mate 30 Pro. However, the standard Mate 30 losses the curvature, opting for a flat-screen. The in-display fingerprint readers and 3D scanning hardware are the same on both phones.

See what you can do with the #HuaweiMate30 Series multi screen feature.

Mirror the user interface so two screens become one.

There is also a noticeable difference in camera hardware. The Mate 30 gets the 40MP sensor with RYYB colour filter and f/1.8 aperture and 8MP telephoto camera but trades the 40MP ultra-wide sensor for a 16MP (f/2.2) lens. The Mate 30 also gets a 24-megapixel selfie shooter. Both the primary and telephoto camera retain their functionality on the Mate 30.

The rear camera keeps the large 1/1.7" 40MP sensor with RYYB colour filter and f/1.8 aperture. The 8MP telephoto camera with 3x optical and 5x hybrid zoom is also on board; both cameras have OIS. However, the ultrawide camera drops down to a 16MP sensor (f/2.2), and the selfie cam has a 24MP sensor.

The rear camera keeps the massive 1/1.7" 40MP sensor with RYYB colour filter and f/1.8 aperture. The 8MP telephoto camera with 3x optical and 5x hybrid zoom is also on board, and both cameras have OIS. However, the ultrawide camera drops down to a 16MP sensor (f/2.2), and the selfie cam has a 24MP sensor.

AI Auto-Rotate allows you to move freely while your #HuaweiMate30 Series phone follows your eyesight so you can view from any angle.#RethinkPossibilities pic.twitter.com/kzj5dgq1J3

The Mate 30 also gets a standard Kirin 990 mobile platform built on the 7nm EUV process. The medium cores on this chip are clocked slightly lower than on the Kirin 990 5G SoC powering the Mate 30 Pro. The NPU also has only one big core instead of two. The Mate 30 gets a slightly smaller 4,200mAh battery with similar wired and wireless charging support.

While the Huawei Mate 30 Pro operates on EMUI10 based Android 10, there is no support for Google services. Huawei Mobile Cloud replaces Google Drive and Photos.

We put people at the heart of our design. From magazine layout to slick, seamless movement, with the #HuaweiMate30 Series, you really can #RethinkPossibilitiespic.twitter.com/VcuiyGheKq