A Tawkon employee demonstrates their software on an iPhone in the basement of their offices in Herzliya, September 2, 2010. Israeli start-up firm Tawkon has developed software to measure mobile telephone handset radiation aimed at helping users reduce exposure to emissions without giving up their phones. Tawkon's application is already available for Research In Motion's BlackBerry handsets and will be launched for Google's Android-based phones and Nokia's Symbian later this year. To match Reuters Life! TELECOM-RADIATION/TAWKON REUTERS/Nir Elias (ISRAEL - Tags: SCI TECH BUSINESS) - GM1E6971PTD01

However, the first place was bagged by Sony Xperia M5, with just 0.14 watts per kilogram, emitting the least levels of radiations.

Motorola’s Moto G5 plus and Moto Z also figure on the list, emitting radiation of 0.30 watts per kg each.

Two smartphones, BLADE A910 and BLADE A610, manufactured by Chinese technology giant ZTE, have also been ranked in the top 15 by the survey. 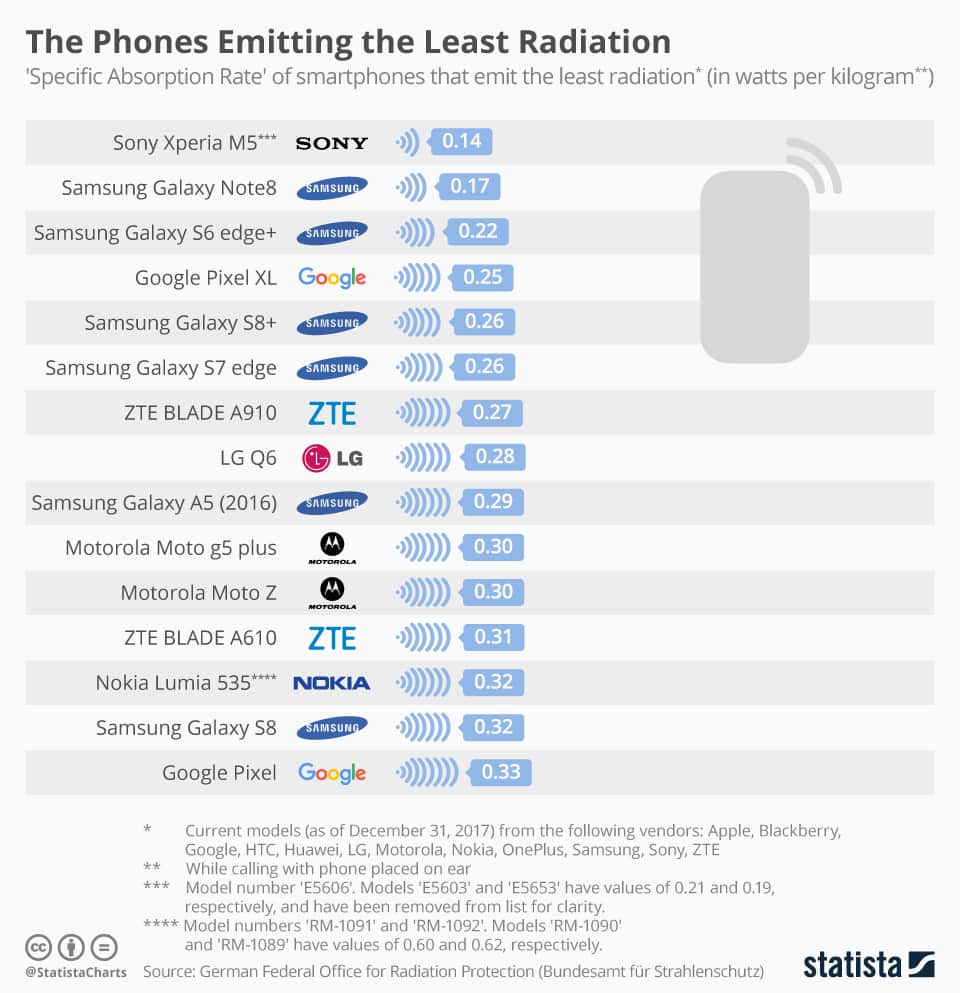 The German Federal Office for Radiation Protection has also put out a list of the most radiation emitting smartphones.

According to the criteria set by the German Federal Office for Radiation Protection, the current smartphone emitting the highest level of radiation is the Xiaomi’s Mi A1. Mi A1 emits about 1.75 watts per kg.

In fact, the top half of the list is dominated by handsets made by Chinese companies. Xiaomi, OnePlus, Huawei and ZTE together have 10 out of the 16 phones on this list.

At 1.68 watts per kg, OnePlus 5T comes second among all surveyed smartphones along with OnePlus 5 which emits around 1.39 watts per kg.

The survey has also revealed that as many as three Apple iPhone models made their way into the list of phones that emit the most radiation. The three iPhones are iPhone 7, iPhone 8 and iPhone 7 Plus emitting 1.38, 1.32 and 1.24 watts per kg, respectively.

Six smartphones manufactured by Chinese electronic giant Huawei also figured on this list including models such as Mate 9, P9 Plus, GX8, P9, Nova Plus and the P9 lite.

None of the Samsung smarthpones figured in the list of top 15 most radiating smartphones. As there are no universal guidelines for 'safe' levels of phone radiation, smartphones with an absorption rate of less than 0.60 watts per kg are certified by German certification for environmental friendliness, called 'Der Blaue Engel' (Blue Angel), according to a report by Statista.