Banerjee claimed that the central investigative agency had knocked on the doors of Kumar without a search warrant.

She also said that she was staging the dharna to protest 'insults' she faced at the hands of Prime Minister Narendra Modi and Bharatiya Janata Party (BJP) National President Amit Shah. She alleged they wanted to impose President's Rule in all states where the Opposition was in power.

While it was seemingly unrelated, the development came the day Uttar Pradesh Chief Minister and senior BJP leader Yogi Adityanath’s helicopter was denied landing permission by the Banerjee government. Earlier, Shah’s chopper too had been denied permission.

BJP has accused Banerjee of attempting to scuttle their poll campaign in the state.

The event was seen by political commentators as the first major confrontation between Narendra Modi-led BJP, which is ramping up its presence in the state, and Banerjee-led TMC.

The BJP has been holding rallies and sending its top leaders to the state as it hopes to make electoral gains in the eastern, southern and northeastern regions of the country in the upcoming Lok Sabha elections. For the BJP, these gains would help offset some of the losses it is expected to face in the ‘Hindi heartland’ states.

In the 2014 Lok Sabha polls, the Modi-led party swept through the Hindi-speaking belt.

Haryana, Uttar Pradesh, Rajasthan, Himachal Pradesh, Uttarakhand, Madhya Pradesh, Chhattisgarh, Jharkhand, Bihar, Chandigarh and the National Capital Region (NCR) of Delhi have a total of 226 parliamentary seats. The BJP won 191 of these seats in 2014. Its partners from the National Democratic Alliance (NDA) won 11 seats there. 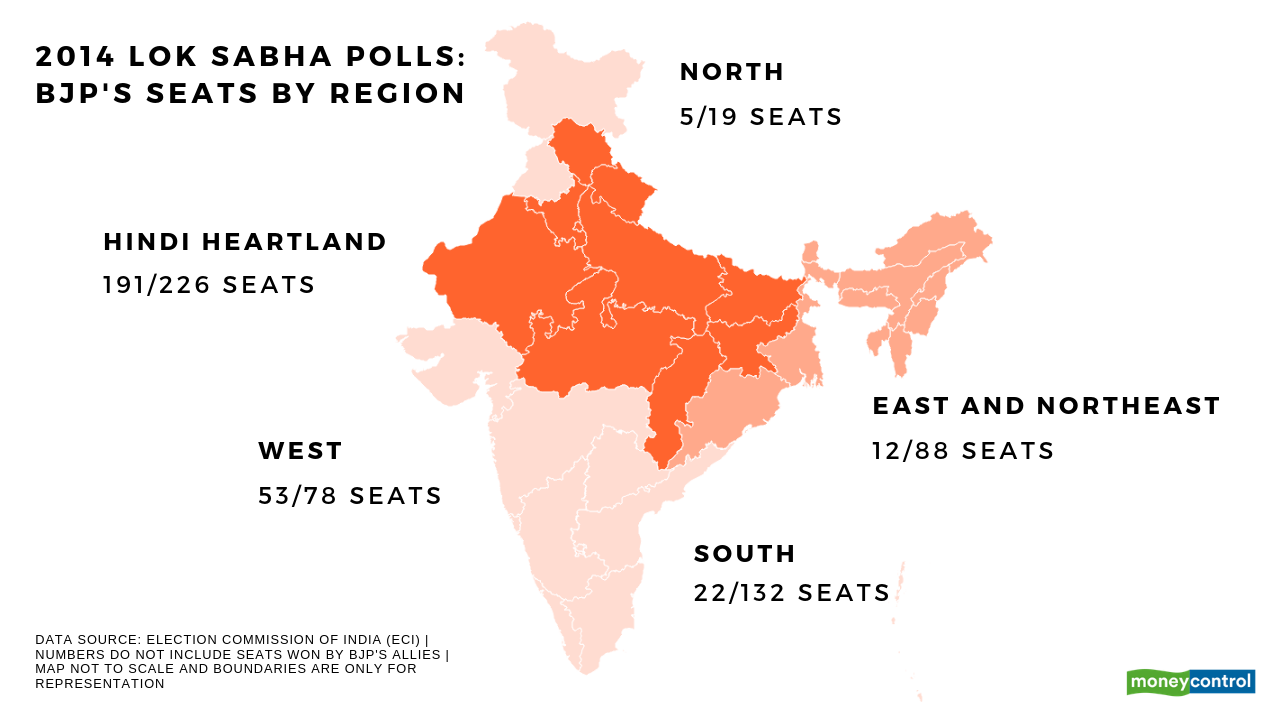 In December 2018, Congress was able to wrest Chhattisgarh, Madhya Pradesh and Rajasthan from the BJP in one-on-one contests in the assembly elections largely banking local anti-incumbency and agrarian distress.

The saffron party is now facing similar anti-incumbency in many other northern states leading observers to believe that it is likely to face substantial losses. Observers also highlight the lack of a ‘Modi wave’ that had swelled BJP’s vote share in 2014.

The Samajwadi Party (SP)-Bahujan Samaj Party (BSP) alliance could cut down BJP’s tally to half in Uttar Pradesh alone, the surveys show.

The East and Northeast have been untapped regions for the BJP as far as parliamentary constituencies are concerned. So, it is here that the saffron party is desperate to make gains.

The region, comprising Odisha, West Bengal, Sikkim, Arunachal Pradesh, Assam, Meghalaya, Manipur, Mizoram, Nagaland and Tripura, has a total of 88 seats. The BJP had won just 13 of these Lok Sabha seats in 2014. Its allies had won two.

In Odisha and West Bengal, BJP won one and two seats respectively, leaving scope for a major expansion.

The politics of West Bengal was dominated by the Indian National Congress and the Bangla Congress (United) till the mid-1970s. Subsequently, the state became a stronghold of the Left Front. Jyoti Basu occupied the top office in the state from 1977 to 2000 — making him the second longest-serving chief minister in the country.

Buddhadeb Bhattacharjee took over the reign in 2000 and continued until 2011 when Banerjee stormed to power.

Over the years, the Left’s influence and electoral performance has tanked. The 2014 Lok Sabha elections and the 2016 West Bengal assembly election were a corroboration of the Left’s collapse.

The BJP has never commanded significant support in the eastern state. However, the party has been on an upswing over the last five years. With Banerjee completing eight years in power in May, local anti-incumbency could also start to play a role.

The state has a total of 42 constituencies. Banerjee’s All India Trinamool Congress (TMC) had bagged 34 out of these in 2014 Lok Sabha polls. Congress and the Left had won four and two respectively. The BJP won two seats. 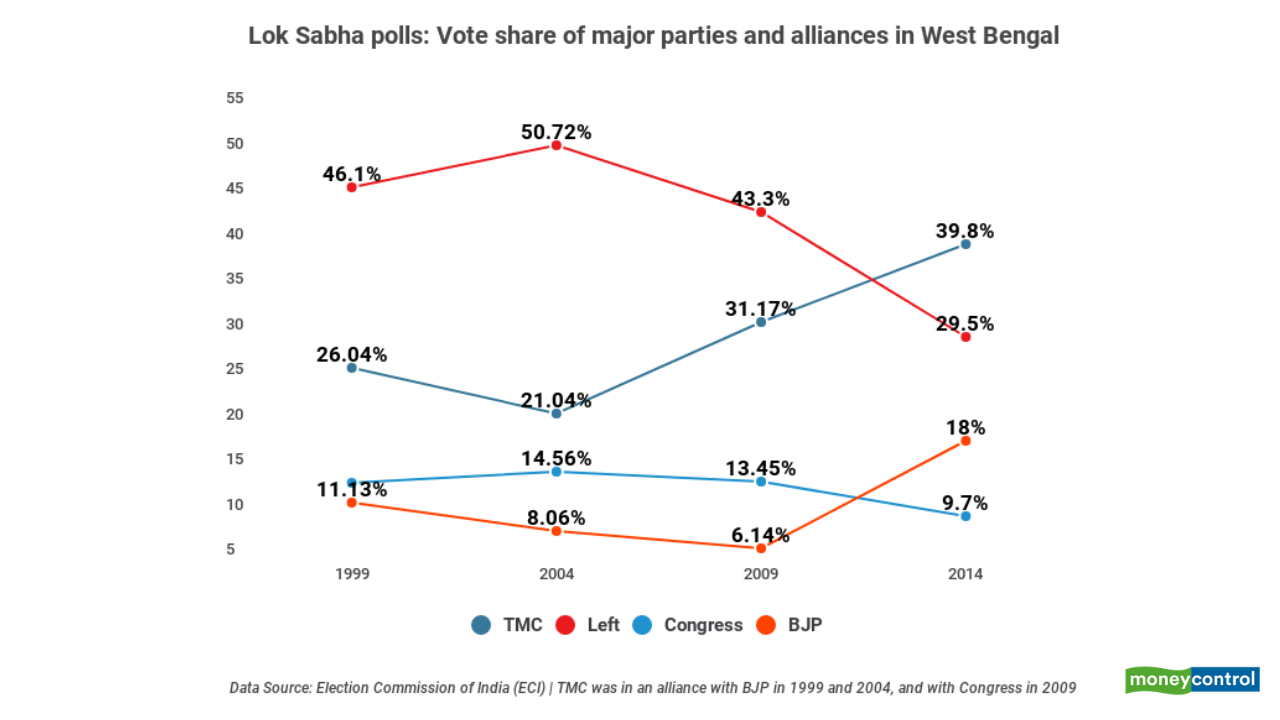 In 2017, the BJP stamped itself as the number two party in West Bengal. While the TMC won 140 out of the 148 wards in seven civic bodies, the BJP won six. However, it was able to trounce the Left Front and the Congress convincingly. One Left and an Independent candidate won; Congress could not win any.

Less than a year later, in May 2018, BJP made inroads into Purulia and Jhargram districts — former Maoist bastions.

TMC won over 21,000 gram panchayat seats. BJP scooped up over 5,700 to cement its position as number two. More importantly, the BJP left the CPM and the Congress behind yet again. 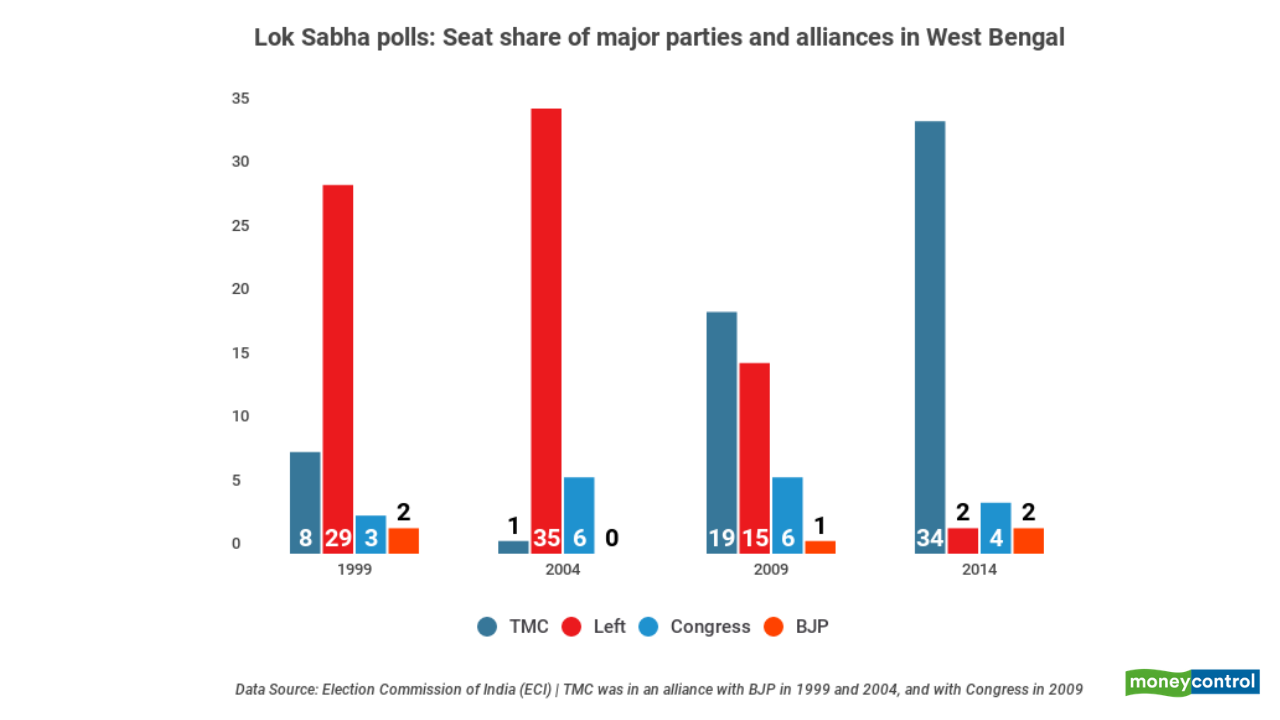 The BJP has been making serious attempts to boost its Lok Sabha seat tally in the state, banking on the new-found support.

It is planning to rope in its top leaders, including PM Modi, party chief Amit Shah and Uttar Pradesh Chief Minister Yogi Adityanath. It plans to organise up to 200 public meetings in West Bengal.

Earlier, the Supreme Court of India (SC) had denied BJP the permission to hold a Rath Yatra. However, it allowed the party to hold public meetings.

The apex court denied permission, saying apprehension of the state government of possible law and order situation cannot be called "unfounded" and BJP will have to take all possible steps to address the apprehension in a reasonable manner.

The two parliamentary seats and 17.02 percent vote share won by the saffron party in 2014 seems to be a pivot for its performance in 2019.

The party had finished second in three seats and third in a whopping 30 seats in 2014. That adds up to 33 seats where the BJP is quickly emerging as an alternative.

The BJP would be focusing on these areas.

The saffron party would also be looking at the tribal seats which fall along the Bihar border.

A Republic TV-CVoter survey from January shows the NDA winning seven seats. The same survey shows the BJP-led alliance bagging at 31.8 percent vote share — significantly more than the Left and Congress combine. The survey predicted TMC to win 34, same as the 2014 result.

The BJP has not announced an alliance with any regional party in West Bengal so far.

The saffron party was pushing for The Citizenship (Amendment) Bill. The bill seeks to amend the Citizenship Act, 1955 to make illegal immigrants (Hindus, Sikhs, Buddhists, Jains, Parsis and Christians from Afghanistan, Bangladesh and Pakistan) eligible for Indian citizenship.

The bill was passed by the Lok Sabha in the Winter Session. However, it was not passed by the Rajya Sabha. As the 16th Lok Sabha’s last sitting was on February 13, the bill now stands to lapse. It would officially lapse on June 3.

The bill had faced strong resistance and sparked widespread protests across the Northeast.

Many parties protesting against this bill are BJP allies. Passing of the bill in Lok Sabha in the Winter Session pushed one of its allies — the Asom Gana Parishad (AGP) — to quit the National Democratic Alliance (NDA).

Political experts believe the BJP could face severe losses in the Northeast due to the unpopularity of the bill. It remains unclear if some section in the region would reconcile with the saffron party as the bill is set to lapse.

Some observers believe that the Bill’s pros for the BJP in West Bengal outweigh the cons in the Northeast.

However, Partha Das, psephologist and analyst at political consultancy Chanakyya, told Moneycontrol, “There seems to be no electoral strategy behind this (the Citizenship (Amendment) bill). This is only ideological just like the Ram Mandir issue.”

“The BJP is looking to gain in the areas along the Bangladesh border which has significant Hindu-Bengali population,” Das said.

“It is a risk that they are taking. Mamata [Banerjee] will not join the NDA (in a post-poll scenario). But Naveen Patnaik can,” he added, highlighting why BJP has no hesitation in trying to make inroads into West Bengal.

Das also believes BJP’s entry in the state will not be smooth. “There are cultural and linguistic differences between the Hindi heartland states and West Bengal. These are still hurdles for the BJP.”

“They have a chance in seven seats, at best. I think their tally will be maximum six. In 2014, they had won two. So, the gains are not great. This will not offset the losses (of the North).”

While a possible Left Front-Congress alliance may not be able to take on the TMC, it could work as a ‘vote-cutter’ against BJP. A Left-Congress could hope to attract anti-TMC voters, who would have otherwise voted for BJP.

“The Left-Congress alliance will happen. It will take time, but it will happen. Otherwise, they will not survive (in the state),” Das said.

Note: The article erroneously mentioned that BJP had won three seats in the 2011 assembly elections and six seats in the 2016 West Bengal Assembly election. The numbers have been corrected.Get access to India's fastest growing financial subscriptions service Moneycontrol Pro for as little as Rs 599 for first year. Use the code "GETPRO". Moneycontrol Pro offers you all the information you need for wealth creation including actionable investment ideas, independent research and insights & analysis For more information, check out the Moneycontrol website or mobile app.