Many believed that the government’s attempts in weaning people from gold were finally yielding fruit. But the euphoria could be short-lived.

Gold imports to the Indian market crashed by almost 39 percent in 2016 compared to 2015 (see table). Many believed that the government’s attempts in weaning people from gold were finally yielding fruit. But the euphoria could be short-lived. 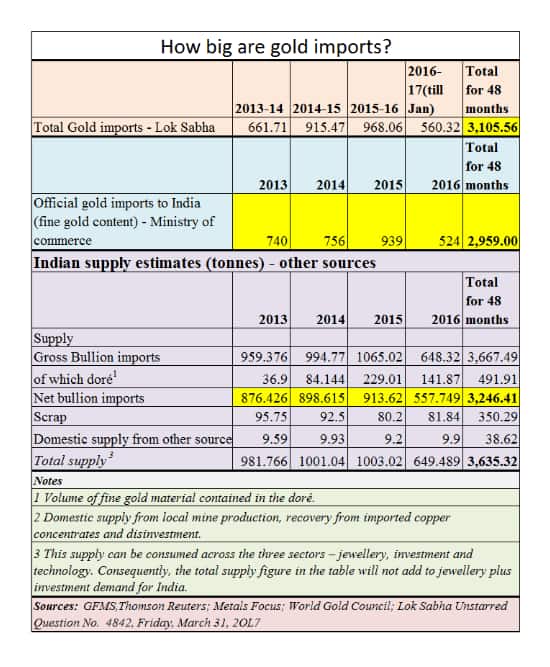 Gold imports are slated to bounce back. They could touch 800 tonnes in 2017.

Sounds improbable? Not really. Even the government believes that 800 tonnes is not an aberration. In its reply before the Lok Sabha as recently as on March 31, 2017 (unstarred question no. 4842), the government stated that “[even though] there are no firm statistics on estimated demand and availability of gold in the country . . . as per rough estimates gold demand in the country is 800-900 tonnes per annum.”

The reason why people expect gold demand to surge is because there is a strong correlation between good rains, higher rural purchasing power and bigger purchases of gold. The price of gold has little to do with it. India suffered three years of drought till 2015. 2016 saw good rains, but then demonetisation struck. This year, too, rains are likely to be good. The forecast is, therefore, for gold purchases to go up.

Consider how gold imports fell in 2003 because 2002 was a drought year. Then, consider the fall in imports in 2005, because 2004 was again a drought year. The only exception appears to be 2010 despite 2009 being a drought year. Gold imports continued to soar possibly because of two reasons. First, the price of gold was climbing rapidly, month after month. It seemed a great investment opportunity. Second, the global meltdown of 2008 convinced many that gold was the safest harbour (for rainfall data please visit: http://www.tropmet.res.in/~kolli/mol/Monsoon/Historical/air.html).

In fact, overall, gold imports kept climbing to a peak of 1,005 tonnes in 2011. Then, they tapered off. Despite soaring gold prices, the demand for gold did not stop. India continues to have a tremendous appetite for gold (see chart) 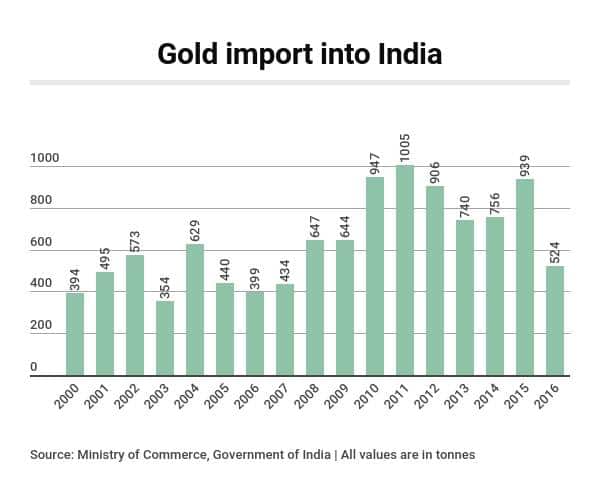 This imported gold is largely brought into the country officially. But a significant amount – around 100 tonnes a year – is also smuggled in. Watch the difference in gold import numbers provided by the government of India and those collated by global research organisations. During the four years it can be seen that the difference is around 287 tonnes. This, say market watchers, is the quantum of gold that got smuggled into India over the past four years.

Read more: Duties, taxes, corruption: How the government abets the smuggling of gold

Even if one assumes a minimum value of just Rs 25,000 per 10 grams (as against the current price of around Rs 27,700), you get a figure of Rs 71,852 crore. That is the value of the gold that got smuggled into India during the past four years. Assuming an average of 100 tonnes a year smuggled in, illegal cash flows for financing gold could account for around Rs 25,000 crore annually using the above valuation and computation. The business of gold smuggling is an aspect that will be dealt with in the next part to this gold series.

A good part of demand for gold comes from the purchase of jewellery. And even though the drought years and the offtake of jewellery have kept climbing (except for purchases in 2016). But then watch how investment gold has kept falling. Rich farmers (including politicians who love to show their income as tax-free farm income) are known to purchase investment gold – coins, biscuits and bars. It would appear that drought years hurt rich farmers as well.

But sentiment, religion and customs ensure that most people keep their faith in gold. The birth of a child, or a marriage in the family, invariably translates into some purchase of gold. During gudi padva and dhan teras festivals the better-off purchase some gold, as it is considered auspicious.

There are good economic reasons, too, behind the purchase of gold jewellery by rural folk. It remains the best hedge against inflation and can be easily mortgaged with any jeweller or pawn shop in exchange for urgently needed cash. That the local jeweller, with whom the villager pawns his gold, is also the local money lender as well, is another story. Most goldsmiths are known to take wax impressions of the jewellery mortgaged. Then, the mortgaged item is smelted, and recast into a similar ornament. When the villager comes to redeem his jewellery he is often not even aware that some of the gold (and the interest money) is the huge price he has to pay.

But this kind of cheating is quite common in India. The government admits that almost 90 percent of gold in the markets could be contaminated. In its reply to a Lok Sabha query (No. 1340) on July 28 2015, the government pointed to the last survey (in 2006) conducted by the Bureau of Indian Standards (BIS). The survey covered 16 cities. It indicated that 90% of the samples of non-hallmarked jewellery had 13.5 percent average shortfall in declared purity.

The gold import numbers must also be looked at without losing track of gold exports. India does export gold jewellery. And there are charges that a bit of round tripping of gold also takes place. Gold tripping allows bullion traders to benefit from export incentives on the one hand, and cheap bank loans on the other. In fact, the surge in gold exports last year has been a cause of concern for the country’s revenue authorities.

Finally, there are times when bullion traders see a great deal more profit potential in silver than in gold. At such times, gold gets exported out, and silver imported into the country. The (illegally) exported gold pays for the (illegally) imported silver. Those intermittent shift in loyalties between silver and gold also cause price fluctuations in India.

That is why, to understand gold, one must also take a hard look at gold smuggling.

Read more: This is how government can clean up gold trade and make it both healthy & profitable

(This is the first of a three-part series on gold, the second of which looks at gold smuggling. RN Bhaskar is a consulting editor with Moneycontrol)
Tags: #Economy #gold imports #monsoon #Rains
first published: Jul 12, 2017 04:08 pm