Compared to other central banks, the ECB’s tasks are more complex as it is a central bank of 19 economies. Having done the review, the markets will watch how the ECB will function with these multiple objectives

On July 8, the European Central Bank (ECB) released its review of monetary policy strategy. The review was widely anticipated as the ECB was one of the few last major central banks whose objective was price stability. The other major central banks had widened their objectives to include employment, financial stability and even climate change. The question was whether the ECB will stick to the knitting or join the other central banks?

It is important to analyse the background under which this review was done. The ECB was established in 1998 with price stability as the objective. During that period, most of the member countries were struggling with high inflation and lacked credible monetary policy, barring Germany’s Bundesbank. Accordingly, the ECB was designed on the lines of the Bundesbank. The ECB reviewed its policy for the first time in 2003. Since then (and till now) there have been no reviews though European economies faced several challenges in the interim period. The region has seen a decline in growth rates on account of slowing productivity, which in turn has been driven by ageing populations.

The 2008 global financial crisis started in the United States but soon spilled over to European financial markets. To add to this, since 2010 some European countries (such as Greece, and Italy) have been caught in a debt crisis. In other countries, the fiscal and monetary policy co-ordinated to pass both fiscal and monetary stimuli. Both these options were not readily available in some countries where the Euro is legal tender. This is because the region does not have a centralised finance ministry, and the monetary policy function is given to the ECB.

The ECB was initially reluctant to ease its policy as it was looking at the entire region. It was only when Mario Draghi became head of the ECB in 2011 the central bank acted and eased its policy significantly. The markets had calmed from 2012 onwards but once again the economic shock posed by COVID-19 in 2020 forced further stimulus from the ECB.

While the ECB maintains that the “primary objective of the ECB is to maintain price stability in the euro area”, it shall also support the general economic policies of the European Union. These general economic policies are: balanced economic growth, a highly competitive social market economy aiming at full employment and social progress, and a high level of protection and improvement of the quality of the environment. On top of this, it shall also contribute to the “prudential supervision of credit institutions and the stability of the financial system”.

In the 2021 review, price stability is defined as “two per cent inflation over the medium term”.  This new wording is much simpler and easier to communicate to the markets and the public. The target will be symmetrical, which means attention will be paid to both positive and negative deviations from the target. This addition of a symmetrical target is based on the experiences after the 2008 crisis where inflation has trended mainly below 2 percent in the Euro area (and other developed economies). The medium-term outlook helps a central bank to not change its policy based on deviations over short-term. 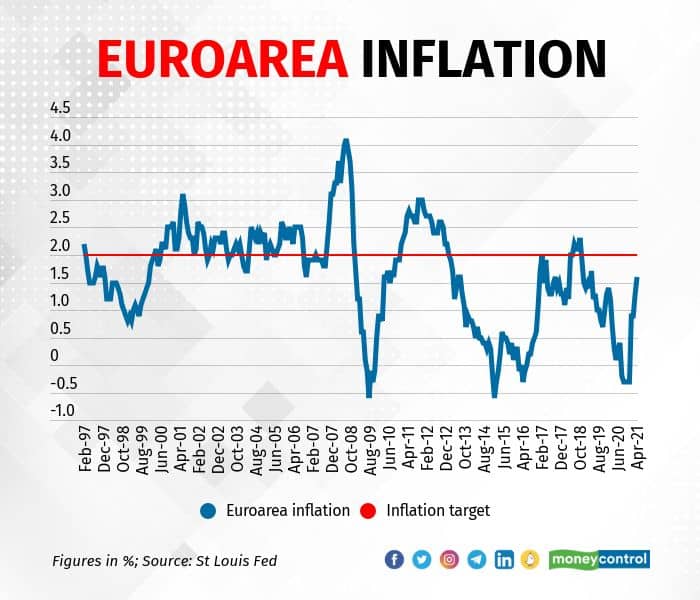 After the 2008 crisis, real interest rates have declined across countries. This implies that central banks cannot rely on policy rates alone and need additional instruments like asset purchases and forward guidance to revive economies. Under Draghi, the ECB had taken these measures to fight the crisis. In the latest review, these instruments have been included formally in the policy toolkit.

One major highlight of this review is the ECB’s commitment to an ambitious climate action plan in its monetary policy framework. First, the ECB will incorporate the impact of climate change in its macroeconomic modelling and also develop statistical indicators to understand the transition. Second, the monetary policy framework will include climate disclosures for risk assessment and the collateral framework. The ECB has laid out a timeline to achieve these objectives over a four-year period.

Coming back to the question of whether the ECB has stuck to knitting or moved away, the answer is clearly the latter. The ECB, like other central banks, has added several policy objectives to the price stability objective. The review is driven by the several changes and challenges the economy has faced in the last 20 years.

While growth and financial stability are macroeconomic goals along with price stability, the one on climate change is controversial. Typically governments should lead the goal of greening the economy but given the threats, central banks cannot just sit back and not do anything. Compared to other central banks, the ECB’s tasks are more complex as it is a central bank of 19 economies. Having done the review, the markets will watch how the ECB will function with these multiple objectives.