Why the ongoing India-China border dispute should remain at the border and not lead to a trade war. Here is all you need to know:

The India-China border dispute has once again sparked discourse about India’s dependence on Chinese goods. Netizens on social media have tweeted their thoughts using #boycottchinesegoods. The Confederation of All India Traders (CAIT), which represents 7 crore traders in the country, launched a nationwide campaign to boycott Chinese goods. CAIT has, under the campaign ‘Indian Goods – Our Pride’, released a list covering more than 500 items to be boycotted from China, and instead Indian goods be used.

Union Minister Ramdas Athawale went a step further by seeking a ban on Chinese food, very well knowing that the food is prepared by Indian chefs using locally sourced ingredients. It’s a no-brainer that these sentiments have little to do with Prime Minister's clarion call to make India self-reliant and is aimed at teaching China a lesson.

What led to the outrage?

At least 20 Indian Army soldiers died in clashes between Indian and Chinese troops at the Galwan Valley in Ladakh area of Kashmir. This is the first fatal clash since 1975 and the most serious since 1967. Soldiers on both sides often do not carry weapons in the area to avoid escalating conflicts. “During the de-escalation process underway in the Galwan Valley, a violent face-off took place with casualties on both sides,” the Indian Army said. While China did not release the number of casualties it suffered, a top Chinese official on June 24 said Beijing did not suffer heavy casualties in the violent clash. This standoff, which reportedly began in April, has evoked widespread anger against Chinese products.

Although taking a good look at our living room will tell us how dependent we are on Chinese goods, there are several reasons why India will use every trick in book except imposing a ban on imports from China. Trade deficit here means that India buys a lot more Chinese products than what China buys from India. The trade deficit is not necessarily a bad thing because it lets a country focus on producing goods it can efficiently manufacture and import goods that other countries specialize in. While no country is self-sufficient, concerns emerge when one becomes dependent on a single country and there is lack of alternative.

China is India’s biggest trading partner. India also has a huge trade deficit with China — it’s largest with any country. India's exports to China stood at $15.54 billion during April-February 2019-20, while imports amounted to $62.38 billion during the same period. Exports and imports in 2018-19 were $16.75 billion and $70.32 billion respectively. These figures show how easy it is for China to replace India and not the other way around. If imposed, trade ban or even a large-scale boycott will hurt Indian businesses at a time when they are struggling to cope with the effects of coronavirus pandemic.  Additionally, even a slight increase in duties would raise the cost of import for vendors, which would eventually result in hiked prices for the consumers. For instance, if Chinese television sets were replaced with expensive Indian brands, a large section of people may not be able to afford, which will eventually cause a decline in demand.

As per reports, 75 percent of the smartphones sold in India are made by Chinese companies. Four of the five best-selling phones (Xiaomi, Vivo, Realme and Oppo) hail from China. At present, Xiaomi is the top smartphone maker in India with a 30 percent market share.

At least 45 percent of consumer durables imported to India come from China. The sector is estimated to be around Rs 763 billion ($11.2-billion in FY19). AC, refrigerators and televisions lead the pack.

In addition to the finished products, an overwhelming percentage of Chinese imports are in the form of intermediate goods such as electrical machinery, nuclear reactors, iron and steel, fertilisers among others. All of the aforementioned items are critical for production. 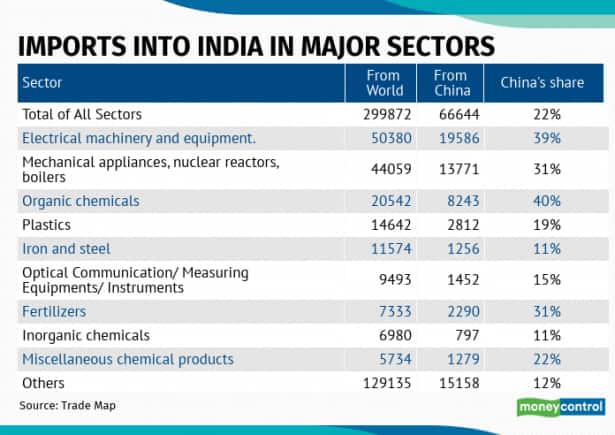 According to Trade Map, China exports a whopping 39 percent of electrical machinery and equipment imported by India. This shows that boycotting finished goods is no solution to our dependence on China as raw materials needed for manufacturing are also imported from the country.

Ant Financial, the fintech arm of Jack Ma's Alibaba Group, has invested millions of dollars in Paytm and Snapdeal. It has invested close to $2.7 billion in India across seven companies.

These numbers reflect how important China's capital is for Indian startups and if this inflow of capital ceases, it will hamper a number of startups seeking to raise money in order to scale their operations.

A trade ban will adversely impact India much more than China. China's share in India's imports is around 14 percent while India's export to China accounts for a mere 5 percent. India’s imports from China are just 3 percent of China’s total exports and good from India account for less than 1 percent of its total imports. 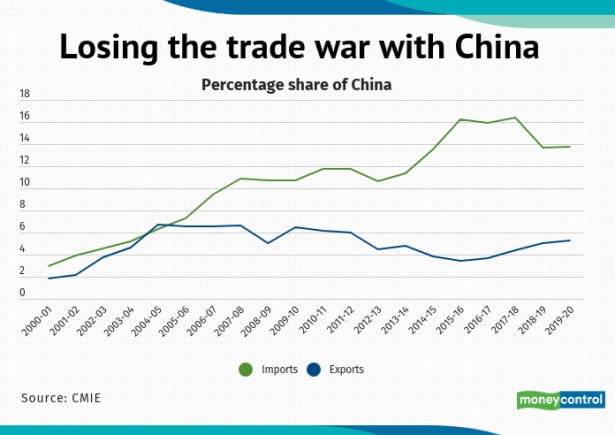 Federation of Indian Export Organisations (FIEO) President SK Saraf said India needs to be cautious while banning or restricting Chinese goods.  "Banning Chinese goods is not feasible as we are dependent so much on China. India can cut its dependence on Chinese goods only when it becomes self-reliant and start producing the same goods in India or source from other markets," Saraf said.

CII’s statement concurred with FIEO President. The Confederation of Indian Industry (CII), a top industry body, said that the India-China standoff in Galwan Valley is a 'wake-up call' for the Indian companies to introspect. It said this is the right time to take some strategic and tactical decisions to ensure that India becomes economically more self-reliant, more competitive and more globally engaged.

Biswajit Dhar, an economics professor at Jawaharlal Nehru University, said putting any kind of trade restrictions on China may have implications for India. "Our dependence on China is huge on several critical products like APIs (active pharmaceutical ingredients). There are no serious alternatives or market for us for those critical products and situation would not change in a day," Dhar said, adding that increasing tariffs or import duties will only burden domestic consumers.

"The only solution left is to strengthen domestic manufacturing in critical sectors," he concluded.

As per the Department of Commerce’s Annual Report for 2018-19, India is the 19th largest exporter (with a share of 1.7 percent) and 10th largest importer (with a share of 2.6 percent) of merchandise trade in the world. These figures can be improved. India indeed needs to be self-reliant by cutting down on imports, particularly from China, and increasing exports to the global markets.

However, Rome wasn’t built in a day. Similarly, India cannot replace China in a day, or even a year for that matter. This call for a boycott based on hyper-nationalism will not be feasible in the long run. It must, however, be based on a well-defined blueprint, which will enable India to become a manufacturing hub. A knee-jerk #BoycottChina reaction is unlikely to help India combat the economic crisis.

To conclude, it is imperative for India to resolve border disputes via dialogue. Letting the dispute turn into a trade war will not pave the path for Atmanirbhar Bharat.