Over the past ten years, the travel and tourism sector is known to create one in five of all jobs across the world.

Tourism is increasingly becoming a major growth driver of India’s economy, now contributing close to $250 billion or 10 percent of the country's gross domestic product (GDP) in 2018, according to a report by Statista. The growth has been faster than expected, considering that the World Travel and Tourism Council (WTTC) had estimated it to be a $230 billion industry in 2018. 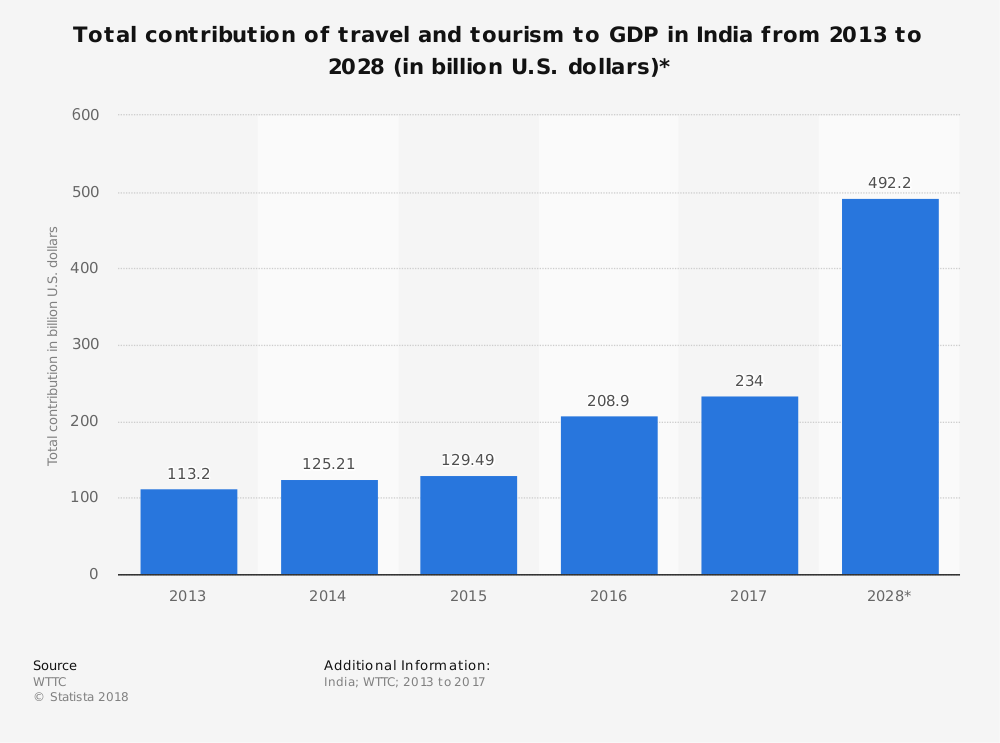 Perception about tourism has changed in recent times, as more people are now looking at travel as a relief from the monotony of everyday life and take regular breaks through the year instead of one long holiday. This apart, measures by the Ministry of Tourism too has helped promote tourism within the country.

Here are some of the factors that have boosted tourism scenes in India:

The simplified visa process has been the main driver of Indian tourism, the largest tourist destination in South Asia, according to the latest report from the UN's World Tourism Organisation. Historically, India has not been a favoured destination for foreign travellers, mainly due to bureaucratic processes and poor infrastructure. There has been improvement on both fronts over the last few years.

Electronic visa processing has made life easier for foreign tourists visiting India. The e-visa policy, launched in November 2014 for 44 countries at nine airports, has been extended to 166 countries, 26 airports and three seaports. These e-visas are available for tourism, business, medical purposes and conferences. International tourist arrivals in India are forecast to rise to 30.46 million, generating expenditure of $46.71 billion, an increase of 5.5 percent per annum.

The government has been giving priority to developing tourism infrastructure so that travelers have a better experience.

Under the Swadesh Darshan scheme, the government has sanctioned close to Rs 6000 crore for 73 projects across 30 states and Union Territories in the country till date.

Nine of the above projects were inaugurated between August to December 2018 in Manipur, Arunachal Pradesh, Andhra Pradesh, Nagaland, Chhattisgarh and Madhya Pradesh.

Facilities such as tourist facilitation centres, eco log huts, craft villages, toilets have been developed at these tourist spots as a part of the above projects.

These moves comes amid a growing awareness within the government about the potential of tourism in generating foreign exchange and jobs. Foreign exchange earnings (FEEs) during January- October 2018 stood at $22.37 billion up 12 percent over the same period the year before.

Over the past ten years, the travel and tourism sector is known to have created one in five of all jobs across the world and, with the right regulatory conditions and government support, nearly 100 million new jobs could be created over the decade ahead, according to the WTTC report.

Alongside, the government has also been working in collaboration with Ministry of Culture and Archaeological Survey of India (ASI), under "Adopt a Heritage Project", to provide world-class tourist facilities at the various natural/cultural heritage sites, monuments and other tourist sites.

With the ongoing digital transformation, the government's idea to set up a go-to website -- Incredible India -- has helped the country attract tourists to smaller cities and towns.

A picture-postcard view of Jhelum River during the fall season. Enjoy a boat cruise along this river when you visit Jammu & Kashmir. #IncredibleIndia pic.twitter.com/0uHKFdbOny

The website provides details about tourist spots across India, lists activities that one can indulge in and gives a brief description of the place. It also categorises destinations based on the type of vacation that one may look for such as a short break, adventurous, honeymoon, pilgrims and more.
Anupa Kujur
Tags: #Economy #Incredible India #India #India Tourism #Ministry of Tourism
first published: Jan 25, 2019 05:11 pm