Kapil’s Devils of 1983 flew back on the Kanishka, which was bombed by terrorists two years later

Recently, Indian cricket lovers marked the 38th anniversary of the historic 1983 World Cup victory. Not many know that the jubilant stars flew back home on the Kanishka, which was to meet its doom two years later.

The BCCI on June 25, 2021, tweeted this photo of then cricket team captain Kapil Dev lifting the World Cup trophy 38 years ago. (Photo: BCCI via Twitter)

The bombing of Air-India’s Kanishka Jumbo is one of the darkest tragedies in Indian aviation. Till 9/11, it was also the worst act of terrorism involving an airplane. But not many know that the same plane is also associated with one of the country’s greatest triumphs.

India’s 1983 World Cup winning cricket team flew back home from London on the very Kanishka which exploded over the Atlantic, off the coast of Ireland, two years later. Terrorists had managed to check-in an explosive-laden bag on the plane. All 329 people aboard were killed.

After many months of searching, contacting Air-India and some players of the 1983 team, Moneycontrol finally found a report of the team’s arrival in Mumbai, which mentions the plane.

“On an overcast humid day, the crowds had started to accumulate at Sahar’s international terminal hours before the Jumbo named Kanishka taxied majestically to a halt at the mechanical arm of the jetway,” the journalist David McMahon wrote in Sportsworld magazine, under the headline ‘Homecoming’.

June 25, 2021, was the 38th anniversary of the win that had huge cricketing and commercial ramifications. Every year when the day comes along, there are recollections and commemorative events.

This year, Opus, makers of luxury coffee table books that can cost up to a couple of thousand pounds, announced they are publishing one on the triumph of ‘Kapil’s Devils’. The much-awaited film ’83, in which Ranveer Singh plays Kapil Dev, is expected to be released later in the year.

But the Kanishka nugget is relatively unexplored.

I first learnt about it when the writer Arup Saikia mentioned McMahon’s report and the Kanishka in a tweet. But an image of the report was not available.

After checking with Saikia, I contacted McMahon, who did not remember the name of the aircraft. He did not have a copy of his article either.

Air India did not get back when asked for confirmation. In the meantime, I checked with Balwinder Sandhu, Dilip Vengsarkar and Ravi Shastri, three members of the World Cup team. None of them remembered the name of the Jumbo. It’s been far too long, for one. Besides, Shastri said in a WhatsApp message, “(We were in) Party mode by then (on the return flight).”

Finally, Clayton Murzello, group sports editor, Mid-Day, and a cricket expert who owns a vast collection of magazines and books, had a copy of the Sportsworld issue with McMahon’s report. The text is accompanied by photographs taken by Mukesh Parpiani.

“Forgotten was the disastrous tour of Pakistan. Forgotten too, the reverses in the West Indies (before the World Cup). In Bombay on July 4, 1983, the only thing that mattered was that India were the world champions in the limited overs game,” the report said.

World Cup 1983 will never be forgotten. And for less fortunate reasons, nor will the Kanishka. But for one day the symbols of an Indian triumph and disaster were joyfully united. 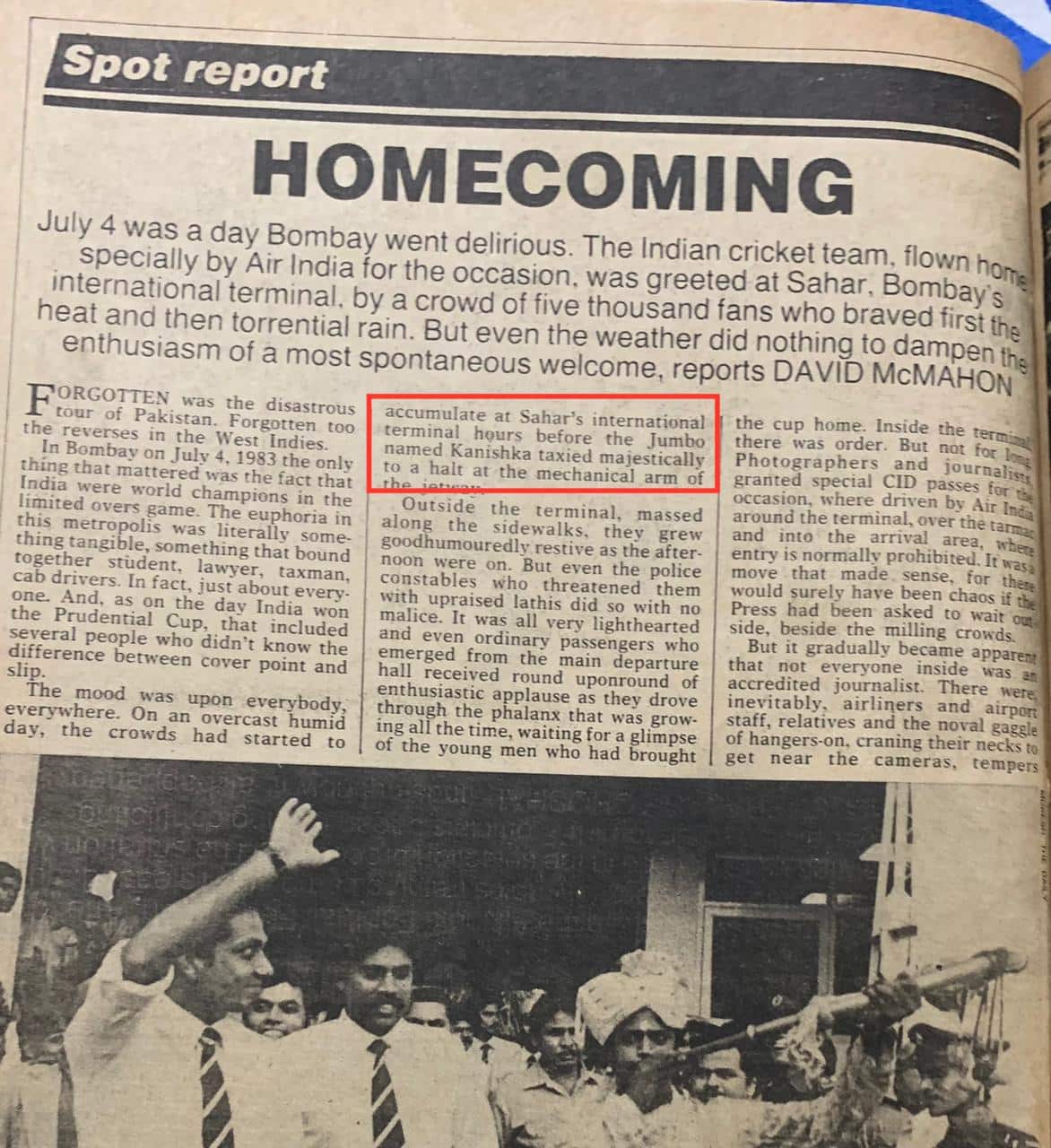 A photo of David McMahon's article 'Homecoming' about the return of the 1983 cricket World Cup winning team, in 'Sportsworld' magazine.