Network augmentation, an improved product mix, impetus towards working capital efficiencies, volume-driven growth and a strong balance sheet should work in favour of the company in the long-run.

Most retailers report that their business was a complete washout in April due to localised lockdowns across the country.

The ongoing market volatility has opened a bag of opportunities for investors who have been waiting on the sidelines to go long on scrips with good earnings potential and comfortable valuations. One such scrip that is worth taking note of is V2 Retail, which caters mainly to the price-sensitive and aspirational buyers in tier II/III regions.

The management, in a bid to strengthen its network, plans to double the existing store count to about 125-130 by mid-FY20. Consequently, the company’s retail space will expand to 1.05 million sq feet, thus driving revenue growth.

To facilitate supply of apparel to mom-and-pop stores, particularly in smaller towns of its target markets, the management plans to start a B2B platform. Benefits of last mile connectivity and a wider customer reach will be visible by way of an improved top-line performance.

To improve supply chain processes, 2 new distribution centres will be set up: one in Kolkata (eastern cluster) and the other in Bengaluru (southern cluster). Reduced dependence on external warehousing and efficient inventory management practices should have a positive rub-off on margins.

Since owned brands fetch better margins vis-à-vis other brands, efforts are underway to increase the share of these to annual sales. The contribution of private label garments, which presently stands at 15-20 percent, is slated to increase to 30-35 percent over the next 2 years.

To enhance product visibility, the company is likely to boost its marketing spends and hire a brand ambassador. Onset of the wedding and festive season in H2 FY19, coupled with an uptick in commercial activities ahead of the 2019 general and assembly elections in India’s hinterland, is a positive opportunity to cash in on.

Owing to availability of adequate liquidity to fund capex plans (in respect of new stores and refurbishing existing ones), the company should be able to maintain healthy bottom-line margins. This is because the need to rely on borrowed funds, which are costlier to raise in the current environment, is lower.

No threat from biggies

National players such as Aditya Birla Fashion and Retail, Fashion at Big Bazaar and Reliance Trends, among others, have a target audience that is different from that of the company. This is because their products are priced at relatively higher levels.

Easy access to credit, greater awareness about products/brands, higher disposable incomes and wider penetration of organized retail channels suggest that growth momentum in semi-urban and rural India remains intact. The company, by virtue of its robust presence in such areas, is well-positioned to reap the benefits.

Stiff competition from unorganised players may necessitate downward price revisions from time to time. It remains to be seen as to how the employee costs and promotional expenses, that are expected to spike in the near-term, normalise without impacting margins.

The company is not immune to some degree of seasonality. Generally, the second half of a fiscal year tends to witness better demand traction compared to the first half.

Network augmentation, an improved product mix, impetus towards working capital efficiencies, volume-driven growth and a strong balance sheet should work in favour of V2 Retail in the long-run. 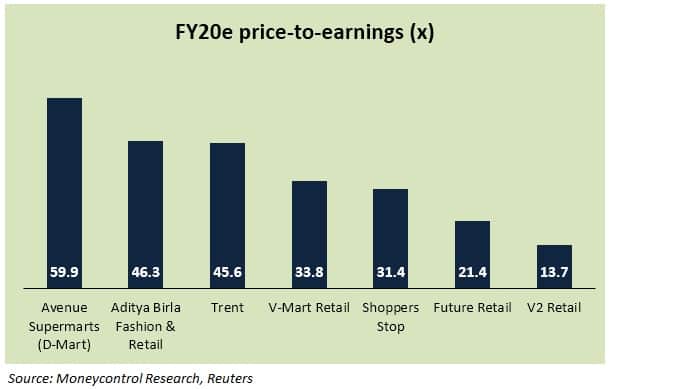 The stock trades at an undemanding 13.7 times its 2-year forward earnings, which is considerably lower than its peers. Given the prospects of a meaningful re-rating, we advise investors to capitalise on the persisting price weakness.