A child would require a lump sum amount when he/she plans to do graduation and the amount collected from either investing in direct equities or via mutual funds would give much better returns compared to child plans offered by various insurance companies, suggest experts.

Children’s Day or Bal Diwav which is celebrated on November 14 to celebrate the birth anniversary of Pandit Jawahar Lal Nehru is an important day for every parent.

If you are a father or a mother who is an active market participant then it is an important day to look at equities with a different approach. Indian market and economy are at an inflection point and next 10 years could see mammoth growth in the Indian economy.

If analysts’ estimates are something to go by then India could double its size of the economy from current $2 trillion to about $4trillion and the S&P BSE Sensex could climb 100,000 in the same period.

A child would require a lump sum amount when he/she plans to do graduation and the amount collected from either investing in direct equities or via mutual funds would give much better returns compared to child plans offered by various insurance companies, suggest experts.

“Investing in direct equities for your child’s future without a proper reviewing or monitoring system is fraught with risks and volatility. So, direct equity route should be avoided,” Alok Ranjan, Head of Research, Way2Wealth Brokers Pvt. Ltd. Told Moneycontrol.

“But, at the same time I feel SIP in diversified or balanced fund is a much better option than investing in insurance companies,” he said.

If the economy shows steady signs of improvement stocks markets would not be left behind but the bigger impact will be seen on individual stocks. We know that making money in a stock market is not easy but if investors’ follow a disciplined way of investing they could make multibaggers returns on their investments.

Last 10 years data suggests that investors have created incredible wealth in just 10 years’ time. From the year 2007, as many as 64 stocks gave more than 1000 percent returns. 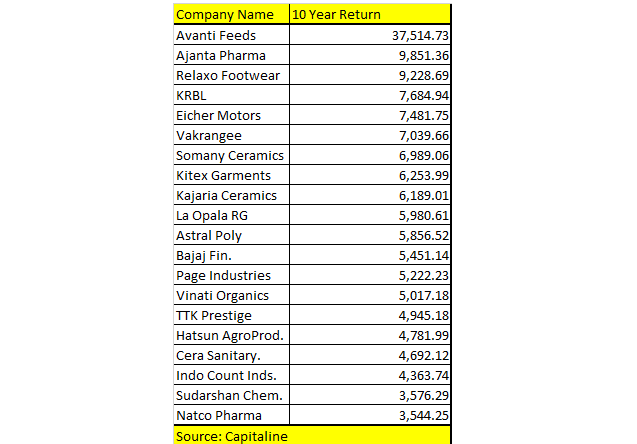 If you are confident that you can pick stocks which could give multibagger returns then invest directly in equity markets. If not, then trust the SIP route, suggest experts.

“Investment done for kids has two objectives – Growth and stability. It is important to strike a balance between both. Children’s plan issued by a life insurance companies are not crafted to take an aggressive bet on the markets,” Dinesh Rohira, Founder & CEO, 5nance.com told Moneycontrol.

“It should be bought with an objective of safeguarding the interest like kid’s education or any major event like a wedding. On the other hand selection of good stocks and mutual funds will ensure that the growth of investments is at much faster a pace and generates enough wealth to achieve planned and additional goals,” he said.

Rohira is of the view that on a long-term, we see a lot of heat in the Indian equity markets and this will push for the substantial growth of investment. “It is recommended to hedge the most important goal with products like ULIPs and aggressively park rest of the money in equity instruments for the long term,” he concludes.

Here is a list of 5 stocks which are ideal for investment with an investment horizon of 10 years or more:

Tata Motors is slated to take benefit of electric vehicles wave in India. Not just that, JLR has become the fastest growing brand in India registering a growth of 40% in 2017. JLR is going to provide the growth in the coming decade.

New product launches and their footprints in premium segment are going to be the growth drivers. The new management under Chandra is determined to get the company back on track in terms of growth hence it should be in one's long-term portfolio.

FCL is expected to grow at a strong pace led by 1) expansion of FCL's store count 2) increased penetration of such stores 3) increased focus on non-Future group retail outlet 4) higher proportion of value added to existing stores.

The company is also looking to leverage on the distribution network of its acquisition of Grasim's personal and baby care products portfolio. Through such efforts, FCL now reaches out to 29000 outlets.

Further, the company has tied up with Nissin Foods (owner of 'Cup Noodles' and 'Top Ramen' brands) to reach out to kirana stores.The company is looking to push its higher value and higher margin products which typically enjoy margins in the range of 25% to 30%. This would help improve gross margins in the coming decade.

The management is expecting 20-30% growth in TV and Entertainment business. Additionally, ALTBalaji, their video-on-demand service that is expected to break even in three years with a target of 4mn subscribers, is expected 60-70cr revenues from this business.

This could potentially be the next growth driver on a longer run. Mukesh Ambani's JIO acquired 25% stake in Balaji Telefilms. The investment by RIL would be utilized to further speed up content development initiatives, especially for ALT, thereby providing it with a strong ability to compete with other OTT (over-the-top) service providers—both global and Indian.

With the announcement of Airtel-Tata deal, Bharti Airtel is expected to gain fresh grounds in the telecom circles. One should consider the potential increase in revenues from this over the coming decade.

The deal gives Bharti 42 million customers virtually free with spectrum licence in 19 of the 22 circles. Bharti's revenue market share is expected to increase by 4-5 percentage points to 37-38 percent post-deal and we believe this will only create a strong base for Airtel to grow further.

They have been an underdog. They have ventured into the lucrative segment of lending operations in housing and the small business segment which have improved margins.

Forex business is also doing good and they have some senior industry leaders in the management which is a good sign.

The digital wealth management business will be the next growth driver for them. Hence, one should consider adding them to their long-term portfolio.