The company registered a respectable performance on the profitability front, with net profit quadrupling year-on-year to Rs 45.66 crore.

After having gained over 1,000 percent since its listing in 2005, online gaming and casino operator Delta Corp is on Motilal Oswal’s radar after reporting a decent set of numbers for the March quarter.

The brokerage noted how the company's revenue exceeded expectations, largely on the back of higher gaming revenue. It has maintained its 'buy' call on the stock with a price target of Rs 327, which implies an upside of 15 percent.

The company registered a respectable performance on the profitability front as well, with net profit quadrupling year-on-year to Rs 45.66 crore.

Motilal Oswal pointed out that while Delta Corp's advertisement and promotion expenses could drive user registrations, higher spend has led to the online gaming and casino business margin contracting to 14 percent.

Having said that, Emkay believes the benefits of increased spend will be visible in FY19-20 in the form of higher revenue. It continues to like Delta Corp as a gaming play in India.

“Furthermore, Delta Corp will continue incurring annual ad spend of Rs 20 crore on Rummy and Rs 5-7 crore on Fantasy League. Thus, in line with management guidance, we expect online gaming EBIDTA margin to remain under pressure before stabilizing at 25 percent in FY19-20,” the brokerage said in its report. 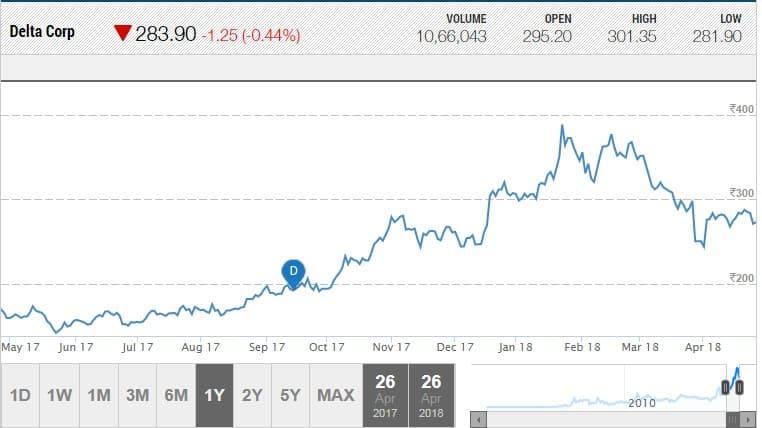 “The policy is likely to make it mandatory for all casino operators to shift to land within three years. As an anticipatory measure, Delta has already acquired a 100-acre land parcel,” the brokerage said.

The fact that Goa casinos saw their organic revenue rise by 5 percent sequentially is also encouraging, it added.

While Emkay sees the companies earnings rising at a compounded annual growth rate of 28 percent between FY18 and FY20, Motilal Oswal sees online gaming revenue growing at 45 percent in FY19 and FY20.