Exclusive Webinar :Gain complete knowledge about how you can invest in global markets during an insightful webinar on April 16 at 11 am. Register Now!
you are here: HomeNewsBusinessStocks

The 22nd GST Council meet addressed concerns of jewellery companies by easing KYC norms. There was some relief for synthetic yarn makers, too, as issues in connection with delayed clearances/ambiguity in export-related tax refunds and an inverted tax structure were considered.

Though there’s no denying the fact that the long-term benefits of GST outweigh the short-term disruptions involved in the immediate aftermath of its implementation, many sectors bore the brunt of the adjustment pangs, and for some, the going was difficult.

A case in point being jewellery players and manufacturers of man-made yarns. While the former faced immense difficulties in complying with the strict Know Your Customer (KYC) norms, the latter’s financials were strained on account of an inverted duty structure (raw material was taxed at a much higher rate vis-à-vis the output) and delayed clearances/ambiguity in relation to export-related tax refunds.

Taking cognizance of the matter, the Finance Ministry, in its recently concluded GST Council Meet, made some key revisions just ahead of the festive season, thereby soothing the nerves of hassled entities in both categories.

The GST Council revised the GST rate for job work (embroidery) in the textile sector from 18 percent to 5 percent in connection with apparel, shawl, and carpet manufacturing. This, in turn, is likely to facilitate a swift flow of processes throughout the textile value chain, enable job workers to claim input tax credit (previously, job workers were forced to pay tax on raw materials procured but couldn’t charge service tax, thus resulting in a cost hike of products manufactured by them), benefit domestic consumers, and strengthen the global competitiveness of India’s textile units.

In the past, as against 18 percent tax on man-made fibre (MMF) yarn, the corresponding rate for synthetic fabric was only 5 percent. Consequently, synthetic manufacturers resorted to MMF yarn imports to save costs. To address these concerns, the GST rate on yarn manufactured from man-made fibres (MMF) has been reduced from 18 percent to 12 percent to prevent price escalations and ease working capital requirements. Nonetheless, until the option to claim input tax credit is made available at the fabric manufacturing stage, the residual problems for synthetic yarn businesses will continue to linger on.

To ease the bottlenecks confronting textile exports, a series of measures were undertaken. Exporters have to pay a nominal GST rate of only 0.1 percent on the value of goods manufactured for export. Additionally, refund claims processing for exports undertaken in July and August would be initiated from the month of October 2017. The government plans to introduce e-wallets from April 2018 to improve exporters’ cash flows, too. 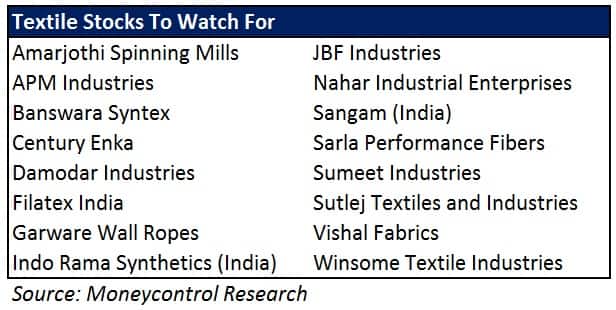 India’s gems and jewellery companies, that have been reeling under major headwinds over the past year (in the form of demonetisation and GST-induced complexities), were in desperate need of some relief immediately before the festivities kick off. The GST Council Meet, by virtue of a few important decisions, gave the sector a shot in the arm.

The GST Council eased KYC (Know Your Customer) compliance limit from Rs 50,000 to Rs 2 lakh on jewellery purchases. The government exempted small jewellers (with a turnover up to Rs 2 crore) from provisions of the Prevention of Money Laundering Act (PMLA, 2002) as well, wherein they would not be required to submit KYC information of customers transacting in excess of Rs 50,000. Though the revised provisions will boost overall demand, the move, incrementally, will help the unorganised players more than their large organised counterparts.