The Rail Land Development Authority (RLDA) is spearheading station redevelopment projects including New Delhi Railway Station, the country’s second-busiest junction. The redeveloped station will have a swanky double-dome terminal building that will be 450 metres long and about 80 metres tall, covering all 16 platforms of the station. The RLDA expects net revenue of Rs 10,000-12,000 crore from the redevelopment of the New Delhi station area, Ved Parkash Dudeja, vice chairman of RLDA, told Akash Sinha in an exclusive interview. Edited excerpts:

The Rs 4,500 crore project was sent to the Union Cabinet for approval. Has this been approved?

It’s in the consultation stage in the ministry. After consultation, a meeting of the PPPAC (Public Private Partnership Appraisal Committee in the Ministry of Railways) will be held. There, the project will be taken up for approval. Only after the approval, we will be able to move ahead with the project. The authority has conducted a stakeholder engagement meeting with nine global and national companies. Any update on this?

They are generally happy with the process. Approval from the ministry is awaited.

RLDA officials had been quoted as saying the project could begin in May. Is this on track? Will it be completed in the proposed four years?

In the government, there is a process and the consultations are on. We can go ahead only after the process is completed. However, we are hopeful of completing the project on time.

The redeveloped station will have a built-up area of 4 million square feet, including a commercial area of 980,000 square feet. Please share details of the commercial development planned.

A 40-storey commercial twin-tower will come up as part of the development. It will be 168 metres tall and will probably be the highest building in Delhi. There will also be a 650-metre long high street along the State Entry Road, which will be pedestrian-friendly only. Vehicles won’t be permitted there. People can walk and do shopping along the high street. It will also connect Connaught Place with New Delhi Railway Station. Then, there will be a mixed type of development – residential as well as commercial – where we have colonies at present. 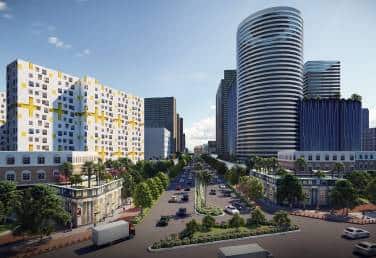 An elevated road network will be developed with multiple entry-exit points and a multi-level car parking facility. The station will be integrated with the DMRC’s Yellow Line, Airport Express Line and the Connaught Place outer circle through a pedestrian boulevard.

The mandatory component of New Delhi Railway Station that we have in PPP is about Rs 4,800 crore. We have also developed a masterplan for the entire Delhi station area, which entails the development of about 40 lakh square feet of built-up area. Going by the value of this built-up area in the market today, the value of the assets being generated will be more than Rs 30,000 crore. We are expecting anything between Rs 10,000 and Rs 12,000 crore (upfront payment) net revenue as a result of this development.

Does the redevelopment plan address the chaos of public transport buses/taxis at New Delhi Railway Station?

The prime focus of this redevelopment is to make the area clutter-free and organised. We are also integrating different modes of transport with railways. We have planned two multi-modal transport hubs (MMTHs) – one on the Ajmeri Gate side and the other on the Paharganj side. On the ground floor of these MMTHs, there will only be buses. It will cater to 51 local buses on the Ajmeri Gate side and about 40 buses on the Paharganj side. It will eliminate the problem of people getting off on the road from the buses and walking up to the station. Travelers can directly enter the station after getting off the buses.

Both the underground metros (Airport Express Line and Yellow Line) will be integrated with the railway station via MMTHs. For autos/taxis/cars/bikes, we will have parking as well as a pick-and-drop facility in the MMTH itself on the higher floors.

Our strategy is to decongest Connaught Place, which gets choked during the evening. We have elevated almost all the roads so that people will reach New Delhi station without approaching Connaught Place.

Will the number of lines or platforms increase after the redevelopment of New Delhi station? What impact will it have on footfalls?

There is no scope to expand laterally. At present there are 16 platforms and these are sufficient for the time being. The new facility will pave the way for shorter stoppage for trains and that will indirectly increase the capacity. We have designed the redevelopment plan keeping in mind the requirements for the next 40 years. The present capacity is 4.5 lakh passengers per day. This will increase to 7 lakh passengers per day post the redevelopment.

What is the revenue-generation model and revenue target for FY23?

We have different models of revenue generation. We offer greenfield land parcels to developers and they make an upfront payment for that. The land is given on lease for 45 years for commercial purposes and 99 years for residential purposes.

Another aspect is that of colony development under public private partnership (PPP) where the developers not only develop new infrastructure for the railways but also make some upfront payment to the RLDA. They develop the colony and then the FAR (floor area ratio) land as per the market demand to monetise it and earn revenue.

Another source of revenue for us is multifunctional complexes that allow small investors to tie up with the railways. Such complexes often have small shopping complexes or hotels in the circulating area of the railway station.

We have targeted to invite tenders for leasing of commercial plots and colonies worth about Rs 5,000 crore this year. We will be inviting around 40 tenders. We have already invited tenders worth Rs 900 crore in April and the rest will be invited in the coming days.