The launch of a standardised term insurance policy was meant to simplify products. Called the Saral Jeevan Bima, the Insurance Regulatory Development Authority of India (IRDAI) had asked all life insurance companies to offer a standardised term insurance policy with the same wordings and basic minimal features. The idea was to make life simpler for the policyholder to compare one company’s cover with that of another. There is just one problem.

In some cases, the premiums are twice as much as those of the existing term covers that these insurance companies have already been offering. IRDAI had set a deadline of January 1 for rolling out these plans, but only a handful of life insurers have launched their Saral Jeevan plans, which are 25-100 percent costlier than their regular policies. These include SBI Life, Aegon Life, Edelweiss Tokio Life and Exide Life, among others. For example, Saral Jeevan Bima annual premiums for a 40-year-old, non-smoker male looking to buy a Rs 25-lakh cover with a 20-year tenure could range from Rs 10,195 to Rs 20,243. 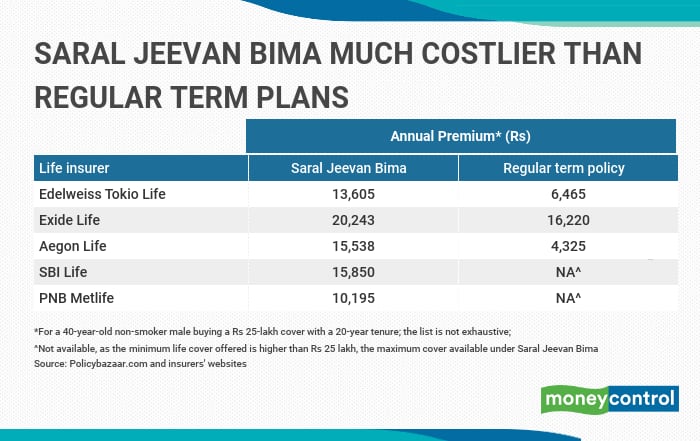 That’s not all. You might even be denied the cheaper (existing) term life covers that these companies offer, if you do not tick certain boxes. Your only choice if you wish to have a term cover would be to go for the expensive Saral Jeevan Bima term cover.

But you must not skip buying term covers on account of steeper pricing.

Why are premiums high for standard life covers?

A term insurance policy is the simplest of all life insurance covers. It simply pays an amount to your dependant if you die. If you survive the term, you don’t get anything. The insurer’s estimate of the policyholder’s longevity plays a key role in determining whether the policy can be issued, and the premium to be charged in such cases.

Through its underwriting process, an insurance firm tries to ascertain how long you – or the category you fall into – are likely to live, and decide how much premium to charge. Many insurers and reinsurers lack the date to underwrite life policies for this segment. In other words, the segment with inadequate educational qualifications residing in remote location and employed in professions considered hazardous by the insurers.

“Metropolitan city-based affluent policyholders with higher incomes tend to maintain healthier lifestyles and also have access to better quality healthcare. They are seen as ‘good’ lives,” says a private life insurance company’s senior actuary, who spoke on the condition of anonymity.

Their chances of living longer are higher and, hence, premiums are lower. Those with lower incomes buy smaller covers. “Those who do not meet these criteria are charged higher premiums due to the higher risk involved. In the past, we have seen that the mortality experience is poor for this category,” he adds. Put simply, the probability of mortality, or death, is higher.

In addition, the cost of distribution can also drive up pricing. “Whether you buy a Rs 5-lakh cover or a Rs 1-crore policy, for the life insurer, fixed costs will largely be similar in both cases. In addition, underwriting challenges in, say, smaller towns will exist, as it may not be easy to conduct detailed medical check-ups. These factors, put together, can lead to higher premiums,” explains Abhishek Bondia, Co-founder, Securenow.in.

Now, most life insurance companies do not offer term covers of under Rs 25 lakh. Those with lower income do not fit the bill, as it is one of the factors linked to the sum assured. However, they have to offer the standard term plan – where the minimum sum assured is Rs 5 lakh – due to IRDAI’s norms. The Saral Jeevan Bima standard term insurance conditions do not permit them to place restrictions related to profession, education and geographical location, for example. However, the pricing was left to life insurers, and it has turned out to be sharply higher. “But Saral Jeevan Bima is a term insurance plan that caters to an entirely different segment of society. The plan or its premiums cannot be compared with those of the broader, regular term plans,” says the CEO of a private life insurer who did not wish to be identified.

Saral Jeevan Bima for the ‘excluded’

So, who should look at buying the standardised term plan? Those who have not been issued term policies earlier due to their educational qualifications, occupation and geographical location not meeting insurers’ eligibility parameters.

“Earlier, self-employed people with an annual income of Rs 3-5 lakhs were not able to get term covers due to the unavailability of income proof.

Through Saral Jeevan Bima, the chances of issuing a term insurance policy to this segment have improved. It provides the option of income surrogate where you can submit the registration certificate of your car or two-wheeler as a surrogate to your income proof,” explains Santosh Agarwal, Chief Business Officer, Life Insurance, Policybazaar.com.

Therefore, despite higher premiums, certain segments will see utility value in the standardised term covers. “We expect the issuance rate to this segment to go up to 70 percent. This is only 30 percent earlier. However, it will be a bit early to see some trends; so far, we’ve seen traction around the self-employed people choosing Saral Jeevan Bima,” adds Agarwal.

If you are unable to buy a regular term insurance policy, you can go ahead with the Saral Jeevan Bima purchase. After all, financially securing your family’s future even in your absence is simply indispensable, even if the life cover comes at a higher premium.

If you are eligible for regular term insurance policies, on the other hand, there is no reason to consider the Saral Jeevan Bima. A term insurance policy is a simple product, where the life cover amount is the paid out to the policyholder’s dependents in case of her death. There is barely any scope for confusion and smaller premium ticket-sizes mean lower incentive for intermediaries to mis-sell regular term plans. Unlike, say, standard health insurance policy Aarogya Sanjeevani, uniform features and benefits can add little value to a term plan.

Preeti Kulkarni is a financial journalist with over 13 years of experience. Based in Mumbai, she covers the personal finance beat for Moneycontrol. She focusses primarily on insurance, banking, taxation and financial planning
Tags: #insurance #term insurance
first published: Mar 15, 2021 10:04 am