For policies that come with larger sum-assured, the claim settlement ratio could be misleading.

How dependable is the claim settlement ratio?

A much-discussed metric, it reveals the claims settled by life insurers out of the total death claims received – by policy count and benefit amount – during a financial year. From a prospective policyholder’s perspective, the higher the ratio, the more reliable the insurer. 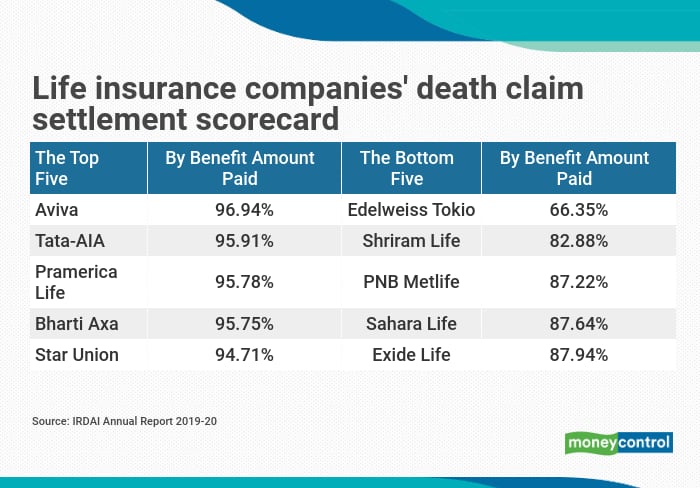 Typically, companies flaunt the claim settlement ratio by number of policies. For most life insurers, it is over 90 percent, which is not surprising given that all of them have completed over 10 years. But it is not enough to merely rely on these numbers. Today, many buy term covers of over Rs 1 crore, which makes claim settlement ratio by benefit amount paid a more important parameter. The ratio by benefit amount usually tends to be lower due to rejection of claims that may be fewer in number, but larger in terms of amount. For example, in 2019-20, the industry settled 96.76 percent of the claims in terms of policy count; but by benefit amount paid, this figure was much lower at 92.91 percent. The gap is due to rejection of high-value claims, particularly the ones received during their early years. “The claim settlement ratio by benefit amount tends to get skewed if a few large claims, which are found to be fraudulent after investigation, get rejected. Further, any pending claims for lack of clear beneficiaries or incomplete documentation at the year-end may also lead to lower settlement ratio,” says Sunil Sharma, Chief Risk Officer and Chief Actuary, Kotak Mahindra Life Insurance.

The difference is 17 percentage points for Edelweiss Tokio Life Insurance, followed by Exide Life with 10.2 percentage points. In fact, if you just account for settlement by number of policies, then Exide Life is among the top five5 insurance firms to have settled claims in terms of policy count. But if you dig deeper and look at how much money it has disbursed as against the claims it has got, it ranks among the worst five.

Not the sole parameter

While claim settlement ratio by benefit amount is certainly more useful than claims paid by policy count for a high-value term cover buyer, it is still not a perfect metric, argues Mahavir Chopra, Founder, Beshak.org. “Going merely by claim settlement ratios is not enough. These will not act as guarantees that your claim will be settled. The data (in the format available currently) does not provide segregation in terms of early, fraudulent and genuine claims and the ones in the grey areas,” he says.

Frauds are the primary cause of claim rejection, say insurers. “Insurance is a contract of utmost good faith. Risk is assessed and policy is issued based on information disclosed by the proposer. If someone suffering from chronic diseases such as cancer or kidney issues buys a policy by not disclosing the material facts, which results in a death claim and hospital records corroborate that the illness was the cause of death, the claim may be repudiated,” says Sharma. Paying fraudulent claims would be unfair to honest policyholders. “This may adversely affect their benefit at maturity, in particular for with-profit policyholders,” says Sharma.

One thing that works in policyholders’ favour is section 45 of the amended Insurance Act: it says that your policy cannot be called into question after three years. Before three years, frauds and non-disclosure of pre-existing illnesses are largely responsible for such rejections.

So, how do you go about choosing your life insurer for buying a term cover? For one, pay attention to the claim settled by benefit amount ratio. Also focus on the claim pending ratio. IRDAI’s protection of policyholder regulations require death claims to be settled within 30 days if they do not need investigation. If required, a 90-day period is allowed to complete the inquiry process and the life insurer has to settle the claim within 30 days after the investigation.

So, in all, the proportion of claims pending for over six months should not be high. In 2019-20, there were 16 such claims for the entire industry. Most claims are settled within three months, but IRDAI data does not indicate the number of claims that were indeed settled within 30 days. Nevertheless, do not go ahead with policy purchase without evaluating companies on this parameter.

At your end, you need to ensure that you disclose all details – personal, professional and health history – transparently. “You must make all declarations and ensure that your nominee is aware of the policy. Insurers largely seek health and lifestyle-related declarations – smoking, alcohol consumption, family medical history and so on. For example, if your parents passed away early, you might be asked to disclose the cause of death,” says Chopra. He recommends writing a separate email to the insurer with any other information that you might want to share, even if not asked for, to ensure that your disclosures are fool-proof.

Preeti Kulkarni is a financial journalist with over 13 years of experience. Based in Mumbai, she covers the personal finance beat for Moneycontrol. She focusses primarily on insurance, banking, taxation and financial planning
TAGS: #insurance #Life Insurance
first published: Feb 22, 2021 11:24 am