172@29@17@101!~!172@29@0@53!~!|news|business|moneycontrol-research|relaxo-a-value-footwear-brand-with-a-premium-valuation-4385351.html!~!news|moneycontrol|com!~!|controller|infinite_scroll_article.php!~!is_mobile=false
Subscribe to PRO at just Rs.33 per month. Use code SUPERPRO
you are here: HomeNewsBusinessMoneycontrol Research

Relaxo: A value footwear brand with a premium valuation

Highlights:-
- Entry into new markets and product launches will be crucial to sales growth
- Lower raw material prices and cost control should aid margins
- Competition and weak demand are the key risks

- The stock can be bought on corrections A wider distribution, periodic launch of new products, shift towards high-value variants and good fundamentals make Relaxo attention-worthy. The stock may be accumulated on dips.

Top line growth was predominantly driven by higher volumes. An improved mix in favour of higher realisation products, coupled with lower operational costs as a percentage of sales, caused EBITDA margin to move up.

PAT margin dipped because of Ind AS 116 provisions -- resulting in bifurcation of lease rentals into depreciation and interest -- lower other income and a higher tax rate.

Why consider the company?

Relaxo has a fairly good market share in northern and eastern states of India. However, since its presence is limited in western, central and southern India, trade channels are being set up in such regions. Simultaneously, in a bid to scale up online revenue traction, investments in upgrading the technological platform are also underway.

In FY20, Rs 90 crore will be incurred to set up a new footwear manufacturing facility at Bhiwadi, Rajasthan, with a capacity of 1 lakh pairs per day. Relaxo may benefit from lower tax rate if this unit is added in a Special Economic Zone.

Given the strong cash flow generation capacity of the company, such capital expenditure is likely to be funded through internal accruals. The amount will be spent over three financial years.

Post this, the company's total manufacturing capacity will be 8.5 lakh footwear pairs per day. Usually, utilisation level at factories is 75 percent. During the peak season, it goes up to 90 percent.

Traditionally, Relaxo has always been perceived as a value footwear brand. While reasonably priced footwear remains the cornerstone to the company's success, product launches are also being undertaken in the premium category.

In FY19, the contribution of high-value products to total revenue stood at 5-10 percent. The management intends to improve this to at least 25-30 percent over the next 5 years, which, in turn, will aid operating margin expansion.

By virtue of its celebrity-backed tie-ups and successful implementation of focused promotional initiatives, Relaxo has managed to create a niche for itself. To capitalise on this advantage, in FY20, the company plans to spend approximately 4-5 percent of its top line on branding activity.

For Relaxo, input costs – Polyurethane, in particular -- have been moderating owing to stability in crude prices. The trend is expected to continue in the short term, implying that gross margins could be better.

- Consumer demand may remain tepid for the next few months. Therefore high advertisement spends may not necessarily translate into revenue growth.

- Intensifying competition in metros and other large cities

- Nearly 50 percent of the company's revenue is derived from North India alone. This is a huge geographic concentration risk.

We are optimistic about Relaxo's prospects because:-

- Steady growth is visible in its legacy markets

- New geographies are being tapped

- The brand's appeal is strong

- In-house manufacturing has been leveraged well 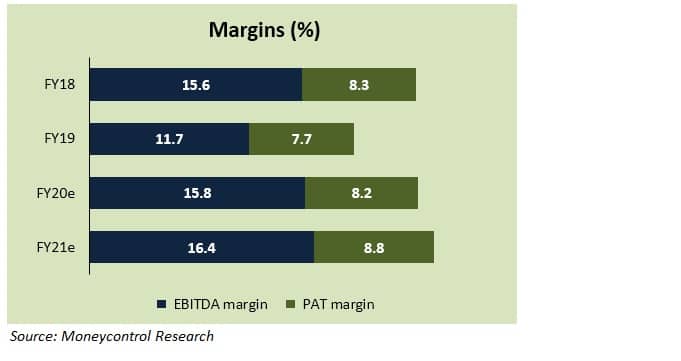 At current market price of Rs 441.9 per share (as on 28th August, 2019), the stock trades at 50/40.4 times its FY20e/FY21e earnings, respectively. In light of the steep valuation, investing on downsides would be advisable.