Greenfield Capex plan for specialty chemicals on the cards

We note that some headwinds in the CRAMS space have abated. The company has bagged a multi-year contract from an MNC client. On top of that, the new cGMP-compliant (Current Good Manufacturing Practice regulations enforced by the FDA) facility in Dewas is also slated to commence production by December this year.

Additionally, a strong margin improvement in recent times, a likely beneficiary of corporate tax cuts and an expected greenfield project in Dahej for specialty chemicals are a few aspects to take note of. 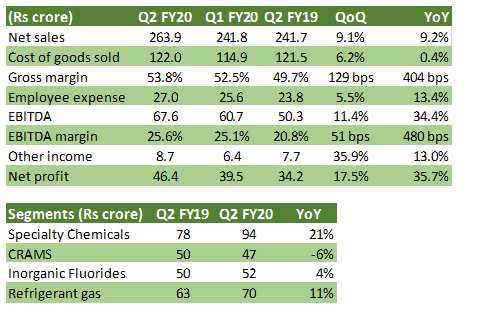 The specialty chemical segment (36 percent of Q2 standalone sales) posted revenue growth of 21 percent YoY (year on year) benefiting from the earlier debottlenecking initiative and addition of four new molecules. Note that this initiative had an investment of ~Rs 10 crore. In case of this segment, downstream domestic market had a higher contribution.  Here, domestic sales grew by 37 per cent YoY.

CRAMS business (18 percent of sales) has shown sequential improvement in the quarter gone by. The company has signed a five-year contract with a US customer which had deferred client orders earlier in the current calendar year. Supplies to this client should begin in Q4 FY20 from the new cGMP plant in Dewas. Refrigerant business (27 percent of sales) saw 11 percent sales growth YoY, mainly on the back of higher volumes in the export market.

Gross margins expanded by 404 bps, mainly on account of a better mix of end markets, along with stabilization of fluorspar prices. This was further aided by cost optimisation measures leading to EBITDA (earnings before interest, tax, depreciation and amortisation) margin improvement.

In case of inorganic fluorides business (20 percent of sales), there was a sequential decline in revenue (-2 percent QoQ) due to a slowdown in the stainless steel and glass end markets. However, here company was able to maintain the segmental volumes and operating margins.

The new cGMP facility in Dewas is slated to commence production by December this year. Note that the Dewas facility has a revenue potential of Rs 230 crore per year, which is two times the investment made (fixed asset turnover of 2x).

Towards the end of FY20, company is expected to announce a mega greenfield capex plan, mostly for the specialty chemical division. Capex estimates have been pencilled in at Rs 400-500 crore. This mega project would also have an investment outlay dedicated for refrigerant gas division.

The chemical player's UK subsidiary -- Manchester Organics -- which provides custom synthesis services, is expected to invest in enhancing capabilities in the first half of CY20. The arm is currently focused on customer acquisition.

In the case of its CRAMS JV with Piramal JV, profitability was impacted in Q2 due to plant shutdown. This JV had turned profitable in FY19 and was running near optimum utilisation in Q1 FY20.

Among key concerns for the company is the outlook for the refrigerant gases business. To reiterate the context, the company’s production quota for the R-22 gas as per Montreal Protocol (Phase out of ozone depleting Hydro Chloro Fluoro Carbons) would reduce by 25 percent in CY20.

In the domestic market, various air conditioner manufacturers are already shifting away from R-22 to next generation gases.  Here, company is hopeful of maintaining current revenue levels in this segment in the near to medium term. This would be achieved through higher demand from the international (Middle-East) markets and increasing usage of derivative products of R-22 in the pharma industry, along with other non-emissive applications.

In the near to medium term, growth would be aided by higher margin businesses of CRAMS and specialty business, which now constitute about 54 percent of sales. Incremental revenues would come from sales of new products in specialty and ramp-up of the new cGMP facility.

Further, debottlenecking initiatives are planned for its Surat plant for the industrial end market. Additionally, better visibility for the medium term growth would come from the greenfield project announcement, details of which are expected towards the end of this fiscal.

According to the management, key raw material - fluorspar - prices seems to have stabilised and towards the end of 2019-20, there could be some consolidation in prices. Notwithstanding this, the pricing power has been exhibited in inorganic fluorides business, along with higher share of high- margin CRAMS and specialty business segments. We expect the company to sustain EBITDA margin in 22-25 percent in the medium term.

On the corporate tax front, the management is still evaluating the new tax structure as it has some accrued tax benefits. However, it is pertinent to mention that the company could be a key beneficiary of corporate rate cuts for the new ventures. The company may utilise this tax benefit for its upcoming capex programme.

Overall, company remains a beneficiary of strong barriers to entry in the fluoro-chemical value chain and going forward, should gain from the formidable expertise in delivering complex chemical intermediates for the pharmaceuticals industry. We, therefore, remain constructive on the stock (P/E at 18.1x FY21 estimated earnings) and believe that it can be accumulated on every decline.