UCO, Bank of India among 12 stocks that rallied up to 70% post Budget; here's why

Apart from the Budget-related triggers, the macro factors are improving as the economy re-opens also added to the strength in the rally. But, structurally things remain weak, suggest experts.

PSU Banking index which fell by about 30 percent in the year 2020, bounced back post Budget after the Finance Minister had announced the privatisation of two Public Sector Banks (PSBs), and also a recapitalisation package.

Other than IDBI Bank, the Budget proposed to take up the privatisation of two public sector banks and one general insurance company in the year 2021-22.

In the Union Budget 2021-22, the government has pegged the disinvestment target for FY22 at Rs 1.75 lakh crore.

Most of the PSU banks remained on buyers’ radar post Budget pushing prices higher. UCO Bank rallies by more than 12 percent, Canara Bank and PNB were trading with gains of more than 20 percent.

Bank of Maharashtra, Central Bank of India, Indian Bank, Indian Overseas Bank, and Bank of India rose more than 50 percent each so far in February.

Ashish Biswas, Head of Technical Research at CapitalVia global Research Ltd told Moneycontrol that before the privatization, mounting bad loans and deteriorating financial conditions have made investors averse to investing in this space.

“Investors see this as a positive development to see better productivity and reduce NPAs in the future under better management,” he said. 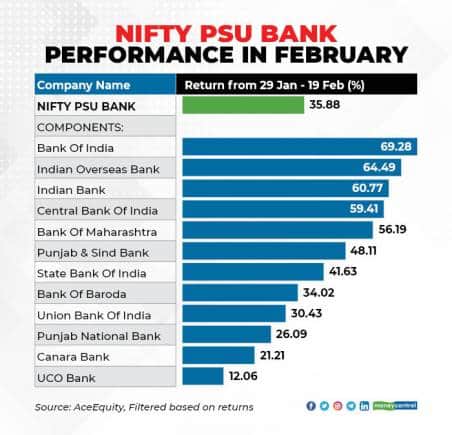 “Government’s move towards privatisation and their efforts to meet their disinvestment target for the coming fiscal has led to a rally in the PSU banking space,” Nirali Shah, Head of Equity Research, Samco Securities told Moneycontrol.

“Also, favourable Budget proposals such as recapitalisation and the setting up of ARCs have diverted markets' attention towards these stocks,” she said.

The recent bounce seen in the PSU bank space is indeed a positive sign but experts advise caution as things could remain volatile.

Apart from the Budget-related triggers, the macro factors are improving as the economy re-opens also added to the strength in the rally. But, structurally things remain weak.

All the above factors are both financially and sentimentally positive for the sector, “hence we have seen markets showing confidence in the long-neglected sector,” Mehul Kothari, AVP – Technical Research at AnandRathi told Moneycontrol.

“On the technical front, we expect some breather from here on in the entire pack,” he said.

Disclaimer: The views and investment tips expressed by experts on Moneycontrol.com are their own and not those of the website or its management. Moneycontrol.com advises users to check with certified experts before taking any investment decisions.
Moneycontrol News
TAGS: #Bank recapitalisation #Budget 2021 #PSB privatisation #PSU Banks #stock recommendations
first published: Feb 23, 2021 01:47 pm