Experts largely hope the index to remain in a broad range of 15,700-16,400 levels but if it decisively surpasses the upper band of the range, then there could be a possibility of the index moving towards 16,600-16,800 levels in the coming days

The market managed to settle the week ended May 27 with half-a-percent gains which witnessed a negative mood in the first three days, followed by a sharp recovery in the next two sessions of the week. The Nifty50 strongly defended the crucial 16,000 mark throughout last week and closed the near-critical hurdle of 16,400 levels.

Experts largely hope the index to remain in a broad range of 15,700-16,400 levels but if it decisively surpasses the upper band of the range, then there could be a possibility of the index moving towards 16,600-16,800 levels in the coming days. Further, if the market breadth turns stronger and global cues remain positive, then there could be further rally in the market, experts said.

The Nifty50 rallied 1.13 percent or 182 points to 16,352 on Friday and during the week, it gained half a percent, but the broader space underperformed frontliners as the Nifty Midcap 100 index fell 0.77 percent and Smallcap 100 index declined 3.4 percent during the week.

"In last three consecutive weeks, our markets made several attempts towards 15,900–15,700, but fortunately, despite unfavourable global environment, our market showed tremendous resilience at lower levels. In fact, with the last two days of smart recovery, our market seems to have weathered the storm, at least for the time being," Sameet Chavan, Chief Analyst-Technical and Derivatives at Angel One, said.

Now, we are back to the higher end of the recent range i.e. 16,400 and it would be interesting to see whether the Nifty surpasses it or not. In our sense, it’s a matter of time and we would see the Nifty traversing this level to test 16,600–16,800 in current week, he said.

Despite all this, he feels we are still not completely out of the woods yet, because globally there is yet to stabilize things. Hence, he advises that traders not get complacent and should keep assessing situation on a regular basis.

As far as immediate supports are concerned, he said 16,200 followed by 16,000 should provide cushion on any intra-week weakness.

Here are top 10 trading ideas by experts for the next 3-4 weeks. Returns are based on the May 27 closing prices:

Primary trend of stock is positive as it is trading above its 100 and 200 weeks moving averages. During the recent correction, stock price has taken support at the upward sloping trendline on the weekly chart.

Stock price has formed Bullish Hammer candle stick pattern on the weekly chart. It has formed triple bottom around Rs 515 levels on the daily chart suggesting strong support around that levels.

It has corrected nearly 30 percent from the recent high and reached near support on the weekly chart. RSI (relative strength index) and MFI (money flow index) Oscillator has started sloping upwards, suggesting higher probability of bullish trend reversal in the stock price in the coming days.

Short term trend of the stock is bullish as it is trading above its 5 and 20 weeks EMA. Stock price is on the verge of breaking out from the symmetrical triangle on the weekly chart.

RSI oscillator has bounced back from the 30 odd levels and started rising, suggesting higher possibility of bullish trend reversal in stock price in the coming days.

Bank Nifty has broken out from the downward sloping trendline and we expect bullishness to spill over in the midcap banking stocks in the days to come.

The IT space has witnessed a decent correction from their highs and Tech Mahindra, too, has corrected sharply along with its peers. However, prices have reached its important support where we can observe a harmonic pattern called AB=CD where two alternate moves are equal in length. This coincides around the support end of a Falling Channel and also the ‘RSI Smoothened oscillator has given a positive crossover from its oversold zone.

The upmove in last couple of sessions from its support indicates probability of a pullback move in the short term. 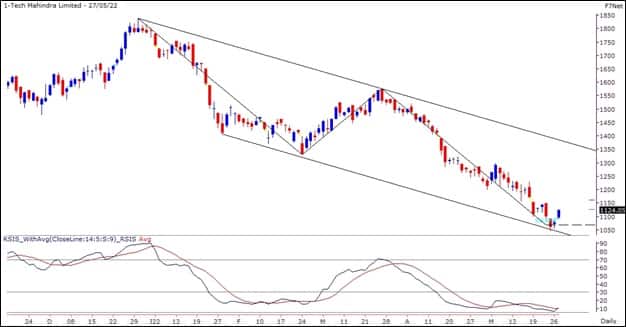 In the recent market corrective phase, this stock has shown a relative outperformance and has seen a time-wise correction rather than any price correction. From the lows of March 8, the recent upmove seems to be a five wave ‘Impulsive’ upmove in which prices are trading within ‘wave 4’.

The stock has formed a triangle in this consolidation and looking at the price volumes structure and the RSI oscillator, we expect a breakout in the stock soon which would be the fifth wave of this impulse. 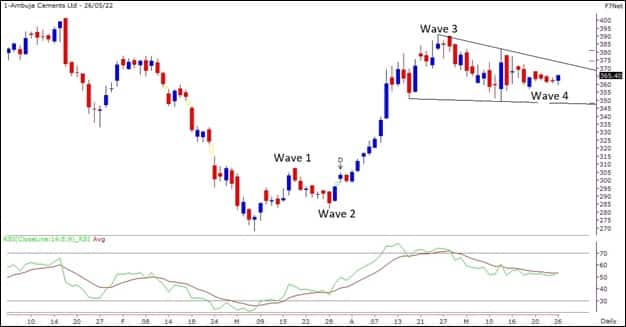 The stock has formed a bullish reversal formation on a daily chart. It has formed a “Gravestone Doji” after hitting the important support level based on the Fibonacci retracement.

Also it’s a volume-based price reversal formation, which should favour bulls heavily in the near term. It's a buy at current levels and more on dips around Rs 1,060 with a final stop-loss at Rs 1,020. On the higher side, it would face major resistance at Rs 1,150 and at Rs 1,250. It has formed a double bottom in the critical support zone. The last several times, it has relied on Rs 44-45 and has bounced back in a hurry.

To validate the formation, the stock must definitely cross the level of Rs 59, which is far from the current level.

Over the past two days, the stock has been rapidly reversing back to Rs 47-48, indicating that the stock is poised to move towards Rs 59 in the near term. We should be buyers at the current level and fall further around Rs 48 with a final stop-loss at Rs 47. It is giving a decent risk-reward ratio for medium-term investors. On the upside, it has the biggest hurdles at Rs 3,400 and Rs 3,600. Keep stop-loss at Rs 3,100 on a closing basis. We’re seeing a mixed trend within the cement space and Ambuja Cements is currently seeing consolidation. It’s hovering in a tight range while holding firmly above the support zone of the major moving averages (100,200 EMA).

The auto pack has been performing well within the sectoral pack and Hero MotoCorp is performing in line with the trend. It has witnessed a fresh breakout from a declining broadening formation on the daily chart and is likely to maintain the prevailing momentum.

Havells has been trading with corrective bias since December 2021 and gradually drifting lower. After retesting the trend line hurdle, it was hovering in a narrow range around the major moving averages on the daily chart and witnessed a fresh breakdown of late.