Re depreciation to be driven by global factors, India's macro situation in better shape: Nomura

In 2018, the movement of rupee has been on the weaker side. It has touched the lows of 68 per dollar levels as well and there are several macro and global headwinds to be blamed for that. Neeraj Gambhir, Head of Fixed Income at Nomura, attribute this to higher current account deficit and increased dependence on capital flows.

“You will see rupee behaving in line with what is happening in the western world. The pace of depreciation will be driven by global factors,” Gambhir said.

Here is the edited excerpt of his exclusive interaction with Moneycontrol’s Uttaresh Venkateshwaran:
Q: The rupee has seen some weakness in 2018. It touched 68 levels to the dollar. Can it depreciate further?

A: As oil prices have touched $76 per barrel, India’s balance of payments is likely to be impacted. Earlier too we have had a couple of years with large balance of payments. Since we have a reasonably high current account deficit (CAD), our dependence on capital flows is rising and that is reflecting in the rupee exchange rate.

India has been underperforming its emerging market (EM) peers, given its high dependence on oil prices. From here on, if oil prices stabilise, rupee performance should be in line with the currencies of other emerging market economies. So, you will see the rupee behaving in line with what is happening with the western world. The pace of depreciation will be driven by global factors.

Q: How does it fit in with macro issues as it trading at similar levels to that in 2013?

A: The comparison with 2013 is not fair. It was a slightly different base. We are now in a situation where inflation is under control. Historically, inflation is good. The Reserve Bank has set a target of 4 percent and the government is sticking to its fiscal consolidation target as well. 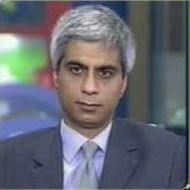 Growth has also picked up in India. At 7.7 percent growth and a forecast of 7.4 percent, we are still the second best economy in the world.

Given all these factors, I don’t think we are in a weak macro-economic environment. The rupee has appreciated against the dollar because there was a weakness when flows were strong. There is a kind of a catch up going on right now. So, that is not a big cause of concern.

In the competitive scenario that we are in, where most currencies are depreciating, it is good that the rupee has adjusted in an orderly fashion.

Q: What are your views on rising bond yields? Do you see further risks or an upside to the yield trajectory?

A: We are seeing weak participation from banks. Lenders hold about 40 percent of this (bond market participant’ pie). Every year, their participation is very crucial. Given the situation in banking space, especially state run names, there is a weak appetite for those bonds. They are struggling with issues of bond pricing being bought forward and this is why they have the dispensation to spread their losses.

The value of yields at 8 percent looks good, while overnight trades are around 6.25 percent. I am not sure if this level will illicit demand from investors even if the yields were to go higher.

Q: What could change things for this are oil prices. If they surprise on the downside, then this along with inflation could bring demand back. This is a wait and watch situation.

A: Central banks around the world are talking about tightening of their policies. We are coming out of an easy monetary policy after a decade. The good thing is that all these changes in the policy are being publicised. They refrain from doing something that surprises the market.

Their communication is forward-looking and trying to prepare the market for such event. We should hope for no destruction (in terms of negative impact). But there could be minor implications as interest rates at higher trajectory tend to have impact on risky asset classes.

We need to see how much of this withdrawal creates the impact and one needs to be watchful of the turn of events such as global monetary policy and growth cycle. So net-net, we will end up being the beneficiary.
Moneycontrol News
TAGS: #Market Edge #Rupee
first published: Jun 21, 2018 02:14 pm