The BSE Midcap index has plunged a little over 11 percent and the BSE Smallcap index dropped nearly 14 percent in 2018. The carnage was similar on the NSE as well.

The Indian market witnessed volatile moves in June but managed to climb the wall of worries and bounced back from 35,073 recorded on June 5 to 35,689 on June 22. Even though the Sensex is up nearly 2 percent so far in June, over 100 stocks in the BSE 500 index hit a 52-week low and over 250 stocks in the BSE Smallcap index hit a 12-month low in June.

As many as 265 stocks in the BSE Smallcap index have hit a fresh 52-week low so far in June. These include: Yamini Investments Company, GTL

Similarly, as many as 110 stocks in the BSE 500 index hit a fresh 52-week low. These include: Vakrangee, Kwality, Hindustan Construction Company, 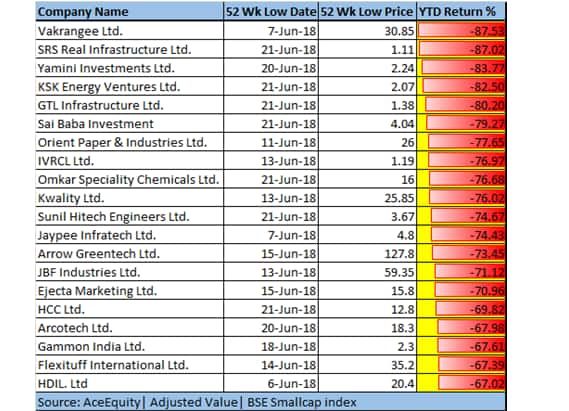 Momentum has been waning in most stocks since the beginning of the year. Most stocks that have hit fresh 52-week lows and have seen a double-digit

"Major momentum in the Nifty is emerging from strength in certain heavyweights. We had categorically stated in our earlier outlook as well that midcaps and smallcaps are a strict no-no given the intrinsic weakness in individual stocks and in indices as a whole," Pushkaraj Sham Kanitkar, AVP - Technical Research at GEPL Capital, said. He stands by the brokerages’ hypothesis that the broader indices may correct by around 5-7 percent. “Hence, one could be looking at opportunities for exiting these stocks on any fruitful rise."

The BSE Midcap index has plunged a little over 11 percent and the BSE Smallcap index dropped nearly 14 percent in 2018. The carnage was similar on the NSE as well.

On a year-to-date basis, the Nifty Midcap and Nifty Smallcap indices are down 11 percent and 16 percent, respectively, compared to a 2.8 percent return for the Nifty.

The broader indices are still trading at a considerable premium and further correction cannot be ruled out even though both small- and midcap indices have suffered double-digit losses in 2018, experts said.

“This suggests that despite the correction, mid- and smallcap indices are still expensive to longer-term averages. There are always pockets of opportunity across market capitalisations but my recommendation to long term investors would be to draw up an asset allocation plan based on one’s risk profile and stick to those plans.”