At a time when analysts are scared of getting their hands in pockets like pharma and IT, Infosys, Torrent, Adani Ports, Hindalco, CEO & Head- Institutional Equities, at IDFC Securities express his confidence in export-oriented theme as most of the stocks he picked up belong to pharma and IT sector.

May 09, 2017 / 02:44 PM IST
A broker looks at a terminal while trading at a stock brokerage firm in Mumbai November 6, 2008. Indian shares fell 3.8 percent on Thursday to their lowest close in a week, caught in a broad global sell-off on fears of a deep U.S. recession, while higher-than-expected inflation data added to the pain late on. REUTERS/Arko Datta (INDIA) - RTXABJW

At a time when analysts are scared of getting their hands in pockets like pharma and IT, Infosys, Torrent, Adani Ports, Hindalco, CEO & Head- Institutional Equities, at IDFC Securities express his confidence in export-oriented theme as most of the stocks he picked up belong to pharma and IT sector.

“Markets is richly valued at the levels. If you were to expect 13-15 percent earnings growth then we need to look at some of the stocks where the market has taken a view that earnings are not going to grow,” said Damania.

“If there is any reversal in fortunes would mean significant upside in those stocks. We like technology and pharma space. In the technology sector, we are now starting to see global growth to firm up further which will benefit the sector,” he said.

Technology firms are at the trough of the valuation cycle and given the fact that how world GDP reports are coming about which signals benefit to technology firms. 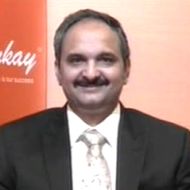 Similarly, for pharma, most of the FDA issues should get sorted out in the next 6-9 months and firms should start getting more compliant. Firms like Sun Pharma should which is on the top end of the spectrum should benefit.

IDFC Securities said that assets light models have become expensive while on the other hand asset heavy models have become cheaper. “We changed our tact from asset light to asset-heavy model about 9 months ago, because it was the trend emerging across the globe,” said Damania.

“We are seeing higher price appreciation in an asset-heavy model such as cyclical. In the metal space, as well as power space – stocks like Power Grid which has gone up by 60-70 percent in the last 1-1/2 years,” he said.

Damania further added that the move towards assets heavy model has started to happen not just in India but across the globe. We like sectors such as oil & gas, as well as metal pack.

Sonia: Talk about some of the largecap stocks that your top picks and within that you have a lot of pharmaceutical and IT names and now we are seeing a bit of a recovery in some of these names. You like stocks like Infosys, Sun Pharmaceutical Industries and Tech Mahindra as well?

A: We see that the market is richly valued even at these levels and even if you were to expect 13-15 percent growth ahead in earnings, so we need to look at some of the stocks where the market has taken a view that earnings are not going to grow and pricing all those concerns at this point of time and any reversal, any small reversal in those fortunes can actually mean significant upside in those stocks. So as a result we have liked technology and the pharma space for some time. We feel that we are at the trough end of what is expected to happen. If you look at technology, we are now starting to see global growth firm up further and with that happening now over the last three-four months in terms of how the world gross domestic product (GDP) reports are coming about, I think technology firms are expected to benefit and they are at the trough of that valuation cycle. So if that benefit comes through then you will see large upsides in these stocks and as a result we are more positive on the technology side and also valuations are there.

Similar things for pharmaceuticals, we have seen the Food and Drug Administration (FDA) issues linger on for a while and most of the FDA issues over the next 6-12 months will get resolved as more and more FDA inspections take place and the firms becomes more complaint with that. So firms like Sun Pharma which are at the top end of the pharma spectrum probably should benefit and we are getting them at the lower end of the valuations range. So both these stocks would form a part of my top picks.

Anuj: Looking at you strategy report, you are preferring asset heavy plays. Your argument is that asset light models have become expensive and asset heavy models are comparatively cheaper but this is a market which is making expensive, more expensive and cheap and even cheaper. So (a) your thoughts on that and (b) which plays are you playing in the asset heavy space?

A: We changed our tag from asset light to asset heavy models about nine months ago and we saw this as a part of the global trend because from FY09 till FY16-17 the global growth was very uncertain, you had a lot of QEs coming up and growth predictions were not so robust and over the last 9-12 months growth predictions have become a bit more certain and as a result we saw most of the investors went into asset light, high return on equity (RoE), high RoC, high cash flow and those ones with brand which gave them a lot of certainty in terms of earnings and growth and that is how money move towards those asset but as now global growth is starting to pick up, we feel that the other side of models which were discarded or were not paid any attention to became cheaper versus asset light models and therefore the money started moving towards these and we see that trend even in India. So we kind of change our strategy from - not that we would selloff the asset light models but we would say now focus more on asset heavy models where we are seeing higher price appreciations, for example cyclical; in metal space, in non-ferrous space we have seen that happen even in the power sector in the asset heavy side like Power Grid Corporation of India. Power Grid has almost gone up by 60 percent odd over the last one-and-a-half year. Therefore, I would say that the move towards asset heavy models has started to happen, not only in India but also globally and I see that trend continuing as global growth continues to firm up over a period of time. So we like sectors like some of the asset heavy power plays, the entire oil and gas space which is asset heavy. We also like the metal space which is also asset heavy. So in that sense we prefer to ride on to asset heavy plays from now on.

Sonia: The other two stocks that you have been fairly bullish on in the pharma space are Aurobindo Pharma and Torrent Pharmaceuticals. Is there value here because these stocks have fallen quite a bit over the last six-seven months?

A: What we have got scared about is the trough in this cycle where FDA inspections are happening, a lot more observations are coming through but we feel is that as more and more of these inspections happen, the pharma companies become more robust in their facilities. I am sure that none of these are going to close down and as a result, as it becomes a lot more robust you will see them laying down a foundation for better growth ahead and market is pricing all probably the negatives in and as we move towards next six-nine months as we look back, we will find that most of these issues would have got resolved and stocks could perform. So we might be little early in that cycle but we would say that as valuations are there with you, you might better be want to be in that phase where you might not want to buy 30 percent more expensive after you are more certain about the FDA issues getting resolved.
Tags: #Adani Ports #Anish Damania #Hindalco #IDFC Securities #Infosys #Market #Market Edge #Torrent
first published: May 9, 2017 02:00 pm