DAILY VOICE | 3 reasons why correction in largecaps could be limited: Shyamsunder Bhat of Exide Life Insurance

The Nifty is quoting at possibly 19xFY23 expected earnings. The index may see some near-term consolidation or possibly a small correction as well, says Bhat

Shyamsunder Bhat, CIO, Exide Life Insurance, says the correction in largecaps could be limited, as there could be supporting factors.

In an interview with Moneycontrol's Kshitij Anand, Bhat says the Nifty is quoting at possibly 19xFY23 expected earnings. The index may see some near-term consolidation or possibly a small correction as well. Edited excerpts:

Both the Sensex and the Nifty hit fresh record highs in June. Where do you see markets in 2021? 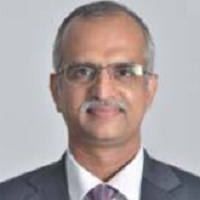 The near-term outlook for our equity market had strengthened about six-nine months ago when corporate results surprised positively in terms of profit margins during the first two-three quarters of the last financial year.

At that juncture, we saw a large number of earnings upgrades, which gave the liquidity-fuelled rally a boost based on fundamentals. Corporate balance sheets have been resilient and in many cases, emerged stronger over the past year.

Thereafter, the longer-term outlook for our equity market considerably improved with this year’s Union Budget, in terms of the willingness to spend on capital expenditure instead of increasing taxes, a possibility of borrowing and spending on growth during the next three years, with a glide path of a gradual reduction in fiscal deficit over this period. These are positive long-term drivers for our equity markets.

There are two differentiating factors if one has to draw a comparison with the last year. The availability of the vaccine (and the ramp-up expected in vaccine production over the next few months) and a component of the cost-savings implemented last year which could be permanent are positive factors.

Inflation will be a factor that would be keenly watched, particularly with Brent crude, too, at higher than pre-COVID levels and adding to the inflationary pressures already witnessed due to the sharp rise in metal prices over the past several months.

Historically, Indian corporates have been able to pass on the input cost inflation to consumers if the demand holds up.

Presently, the Nifty50 is quoting at possibly 19xFY23 expected earnings. We could be looking at some near-term consolidation in terms of the index, or potentially a small correction as well.

However, we could continue to witness sectoral rotation, as liquidity is abundant and all sectors have not participated in the last leg of the rally.

With markets at record highs, what should be the investor strategy? Should they wait for a dip to deploy money in stocks or mutual funds or be aggressive and add more money?

A systematic mode of investing in diversified portfolios, managed by mutual funds and insurance companies, should ideally continue to be a preferred option for a larger part of the asset allocation, as compared to chunky investments in individual stocks at high valuations.

For the third month, mutual funds saw inflows, a positive sign for Indian markets that suggest that there is a new line of defence that has emerged. What are your views?

Foreign institutions had turned sellers in April when the concerns of the second wave were rising, but this selling abated in May. Domestic institutions bought equities in April to almost the same extent as the sales by FIIs, and this helped the equity markets remain reasonably resilient during the second wave.

During calendar 2020, insurance companies were buyers but mutual funds were large sellers due to the continued redemption pressures, which continued till February this year.

Thereafter, we have been seeing inflows in equity mutual funds for three consecutive months, which is a healthy sign.

Despite domestic funds seeing inflows, markets could nevertheless correct, if we see a renewed selling from FIIs in the latter part of the year.

However, the extent of the correction in the largecap indices could be limited, as there could be supporting factors.

One, the restoration of confidence among domestic investors in terms of the historical long-term returns from equities; these have now been restored to a level higher than the returns from debt, thereby justifying the higher risk generally associated with equities.

Two, a stronger outlook for overall GDP growth as well as individual corporate earnings over the next few years.

And three, the record level of foreign reserves that we now have as a country (an important factor when we are considering any repercussions from potential large FII outflows).

What are the factors fuelling the rally on D-Street?

In one of the earlier responses, the reasons for the upward trajectory of our equity market for the past one year+ has already been mentioned.

It is for the above reasons that our equity market has been quite resilient during the second wave of the pandemic, recently touching record highs as most of the States are emerging out of their lockdowns post a sustained reduction in the number of fresh Covid cases.

Overall, liquidity has remained strong, and large developed markets like the US also witnessed their indices touching record highs in the last couple of months, these factors have aided this “relative resilience” of our market.

Even from a fundamental perspective, the impact on our economy is not as severe as the first wave. While the April-June quarterly numbers would be lower than earlier expectations, the numbers may still be reasonable due to the impact of the low base of the corresponding quarter last year (which was impacted by a nationwide lockdown and supply-side bottlenecks).

The expectations of real GDP growth figures have moderated, however, continue to be close to double-digits as of now.

Which sectors will lead the next leg of the rally on D-Street?

Post the second wave of Covid cases, we need to watch out for two differentiating factors: the impact on the sentiment and the behaviour of middle-class urban consumers due to the higher number of cases and mortality witnessed during the second wave, and also the impact on rural demand due to a large number of rural cases as well.

Rural demand should hopefully improve after the monsoon, which is expected to be a good one.

On the urban front, we could see a higher level of savings to deal with prospects of medical emergencies, and a guarded rebound in consumer discretionary expenditures.

However, this could be transient and could change when the situation stabilises and vaccination levels become reasonably higher post the scheduled ramp-up in vaccine production.

We could therefore see an overall revival in the consumer sentiment and demand in H2 this year (unless we see a third wave of infections).

The banking and the consumer sector (FMCG as well as some segments of consumer durables and consumer discretionary including some segments in the auto sector) have lagged the market rally this year and could lead the next leg of the rally, assuming normalcy is restored in the major states over the next month, and vaccination continues.

Which sector/stocks fall in the category of disruptors?

We have witnessed technological innovations disrupt conventional business models across various sectors, in recent years, and this trend may continue.

We may continue to see developments in the space of digital payments and fintech, consumer electronics, electric vehicles (and ancillaries), telecom and media, pharma, and healthcare, to name a few. Disruptors could be either from the listed space or the unlisted space.

Things investors should avoid when markets trade at a record high?

Retail participation in direct equities has risen sharply over the past year, and remains elevated. Considering that the Nifty50 has risen more than 100 percent and the Nifty Midcap 100 index has risen almost 150 percent since March 2020, both with hardly any corrective movements (intermittent corrections have been small and less than 10 percent), retail investors with a direct equity participation (with possibly a reasonably large number being first-time investors) need to be cognisant of this fact.

As a general principle, investors should keep their age, income, and risk appetite in perspective, along with their time horizon for investments.

The importance of risk appetite and time horizon is even more significant when markets are trading at a record high.

Therefore, at the present elevated levels of the markets, investors could commit large amounts of incremental investments only if they have a longer-term horizon (five plus years).