Crude on course to spike by March but may trade below $100 a barrel: MC Poll

Moneycontrol conducted a poll to gauge sentiments towards crude oil prices and how fuel prices in India would, in turn, be impacted.

Benchmark Brent oil prices are seen rising from current levels by March but are unlikely to breach $100 a barrel, according to a poll conducted by Moneycontrol.

A survey of 14 energy experts from brokerages and rating agencies reveals that they expect some upward pressure on the price of crude oil but are divided on the quantum of the increase. Five experts said it would be at $80-90 a barrel and the same number said it would be in the $90-100 range.

On December 14, the Brent crude price rose more than 2 percent to settle at $82.70 per barrel.

The price of crude oil has remained volatile in 2022 due to several factors, including geopolitical tensions building up ahead of Russia’s invasion of Ukraine in February. The volatility has continued since then, amid recession fears sparked by a weakening global economy and demand uncertainty in China on account of its zero Covid-19 policy.

The poll conducted by Moneycontrol gauged sentiments towards the price of crude and how this would reflect on fuel prices in India.

Energy experts forecast that crude will range between $80-$90 per barrel by the end of December.

“The drop in prices is driven by stabilisation of crude oil inventory in the US at around 8 lakh barrels over the last three months, resulting in lower supply-related fears and enhanced worries about (the lack of) sustained demand due to fears of a recession. That’s why, despite winter setting in, we are retaining December-end prices to be around $80-$90 per barrel,” Hetal Gandhi, Director - Research, Crisil, told Moneycontrol. 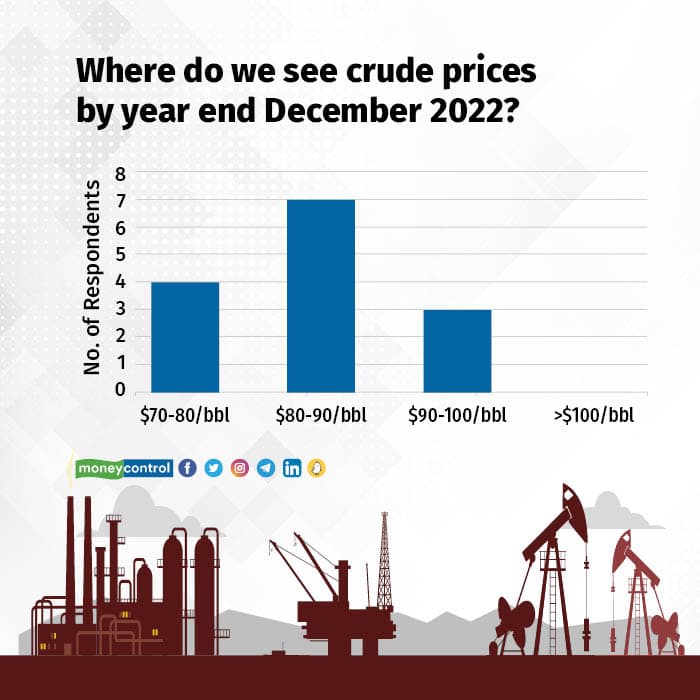 The crude oil price is expected to rise from the current level but remain below $100 a barrel by March 2023, according to the poll.

The price of oil has tapered from the high levels of March but continues to remain volatile amid demand unpredictability due to recession fears.

“Oil prices are expected to continue to remain restrained as inventories are likely to build through May even with sanctions on Russia and tapering of SPR releases. But later in 2023, stocks should (be) draw(n) and prices increase. Dated Brent prices have already come off substantively but are expected to average near $90/b for the fourth quarter. Prices in 1H 2023 are expected to be in the mid $80s on average before recovering for 2H 2023,” said S&P Global Commodity Insights. 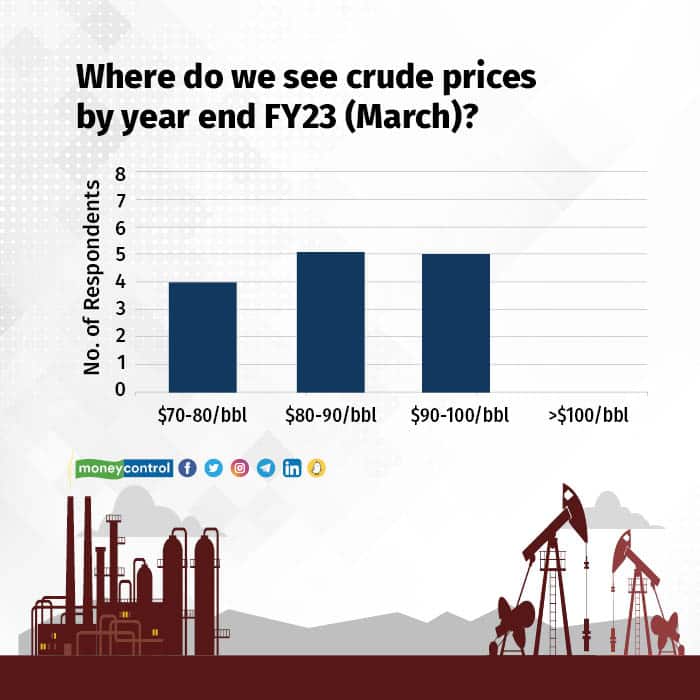 Despite an entire year of volatility, uncertainty has not settled for crude oil. According to the Moneycontrol poll, the price of crude will be majorly impacted by low demand or recession fears.

Countries around the world, including the largest economies, such as the US and the UK, are experiencing record-high inflation and facing fears of a recession. Global economic challenges pose a direct impact on oil demand. Additionally, demand has also slumped in China, the world’s largest consumer, due to its strict COVID-19 policy.

Meanwhile, data released on December 13 showed a smaller-than-expected rise in US consumer prices, cementing bets of a slowdown in rate hikes by the Federal Reserve. US inflation for November was recorded at 7.1 percent annually, against a Dow Jones estimate of 7.3 percent. It was down from an annual gain of 7.7 percent in October. The consumer price index, which measures a wide basket of goods and services, rose 0.1 percent in the previous month, below an estimate of 0.3 percent.

On December 13, the Organization of the Petroleum Exporting Countries (OPEC) left its forecasts for oil supply growth from non-OPEC countries largely unchanged at 1.9 million barrels a day in 2022 and 1.5 million barrels a day in 2023, signalling that it expects little impact on Russian crude oil production from Western sanctions. But going ahead, a factor that would impact prices is a potential supply cut by OPEC and its allies (OPEC+) if prices decline, the analysts said.

“The recession has pushed down prices but at the same time OPEC+ has been increasingly active in management of supplies. So, there could be a supply response to this demand reduction,” said Prashant Vasisht, Vice President and Co-Head - Corporate Ratings, ICRA. The experts remain divided on how the crude price would affect India’s trade deficit. Half of the experts pointed out that rising crude oil prices would have a significant impact on the trade deficit of the country while six respondents said it would have a mild impact.

“It already had a significant impact on the trade deficit in H1FY23. During the April-October period, the cumulative trade deficit shot up to $175 billion as compared to $94 billion in the corresponding period of the previous year. This has aggravated the pressure on the INR. However, we expect the trade deficit to moderate in H2FY23 due to the ongoing reduction in crude oil prices,” said Suman Chowdhury, Executive Director & Chief Analytical Officer, Acuité Ratings & Research Limited. 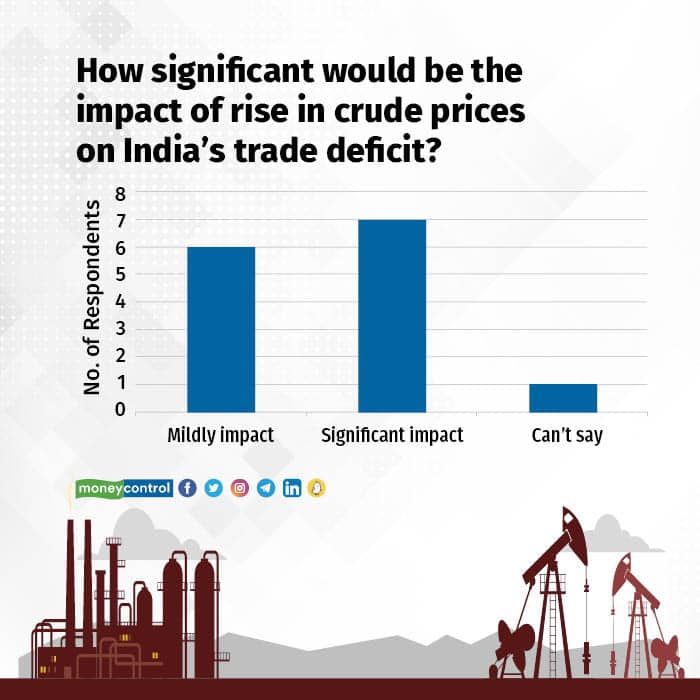 “The retail prices of petrol and diesel have remained largely unchanged since the beginning of the year, even after prices escalated to where they are now. The government is kind of protecting the retail consumer by limiting the inflation that is being passed on,” said Sweta Patodia, AVP – Analyst, Corporate Finance Group, Moody’s. “So, as far as consumer price inflation is concerned, we haven't seen that much of an impact; but on an overall macro basis, given where crude prices are, it will definitely impact wholesale price inflation.” Moody's did not participate in the survey but shared its view.

The Reserve Bank of India’s monetary policy committee (RBI MPC) has been on a rate hike course throughout the current fiscal, increasing policy rates by nearly two percentage points to contain inflation. The country’s headline retail inflation rate declined to a three-month low of 6.77 percent in October from 7.41 percent in the previous months, aided by a favourable base; it still remains above the central bank’s upper tolerance band of 6 percent. Movement of petrol and diesel prices in FY23

Moneycontrol received a mixed reaction from the energy experts regarding the outlook on petrol and diesel prices in India for the rest of the current financial year. Experts have mixed views on whether the decline in crude oil prices in the last few weeks would translate into a cut in the retail prices of petrol or diesel. Despite the decline in crude prices, Oil Marketing Companies (OMCs) have not reduced petrol prices to recoup the losses they had incurred earlier.

Six of the 14 respondents said there would be a moderate decrease in prices while five experts said prices might increase moderately.

“With the decline in crude oil prices, the OMCs will not hike prices. They either might stay in the current range or decrease moderately,” said Hitesh Jain, Lead Analyst, Yes Securities.

In India, OMCs typically revise retail petrol and diesel prices daily, based on the rolling average of international benchmark prices over the past 15 days. But earlier this year, they left prices unchanged despite soaring crude oil prices to keep inflation in check, taking a hit on the bottom line.

“The drop in crude might not be passed on and we might see a commensurate increase in taxes as the government enters into the pre-election year where it might want to focus aggressively on infrastructure. Prices will get a little cheaper but not in line with international crude oil prices,” said Gandhi. 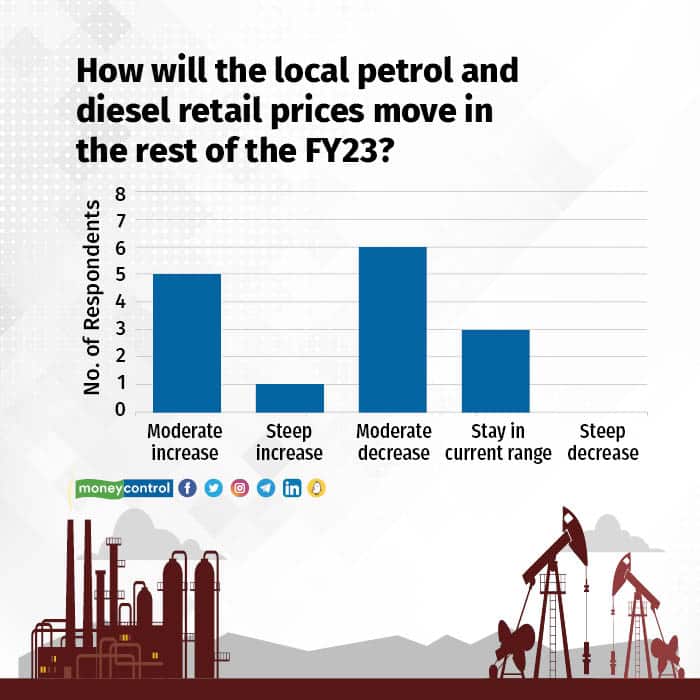 The Indian rupee has fallen to an all-time low against the US dollar due to several factors, including the ongoing Ukraine crisis, the hike in interest rates by the US Federal Reserve, and selling of Indian stocks by investors.

Survey respondents said that they cannot say if a likely increase in crude oil prices would lead to a further fall in the rupee. On December 14, the Indian currency closed at 82.45 per dollar. In July, India imposed a windfall tax on oil producers, including state-owned Oil and Natural Gas Corporation (ONGC) and Vedanta-controlled Cairn, as these companies made unprecedented profits due to high crude oil prices.

“It (the windfall tax) will help reduce the fiscal deficit to an extent. There is no direct correlation between the windfall tax and petrol prices for consumers in India,” said Navneet Damani, Senior VP – Commodity Research, Motilal Oswal Financial Services.