The second wave of the coronavirus is the main reason why most banking stocks failed to carry forward the healthy Q4FY21 numbers. With economic activity picking in June, business growth is expected to improve from the second half of FY22, say experts

The year 2021 has been healthy for the equity market even as coronavirus and inflation concerns have persisted amid signals that the rolling back of massive liquidity infusion may begin sooner than expected.

Sectors like IT, metals and pharma have led the rally but private bank stocks have not been at the forefront to the action.

The Nifty has gained 13 percent in 2021 against a 12 percent rise in the Nifty Bank but the Nifty private bank index has moved up only 6 percent this year.

Some of the top private sector bank stocks, including the HDFC Bank and Kotak Mahindra Bank, have underperformed so far. However, J&K Bank and Equitas Small Finance have jumped up to 72 percent.

Among the heavyweights, only ICICI Bank and Axis Bank have been able to outperform the Nifty. 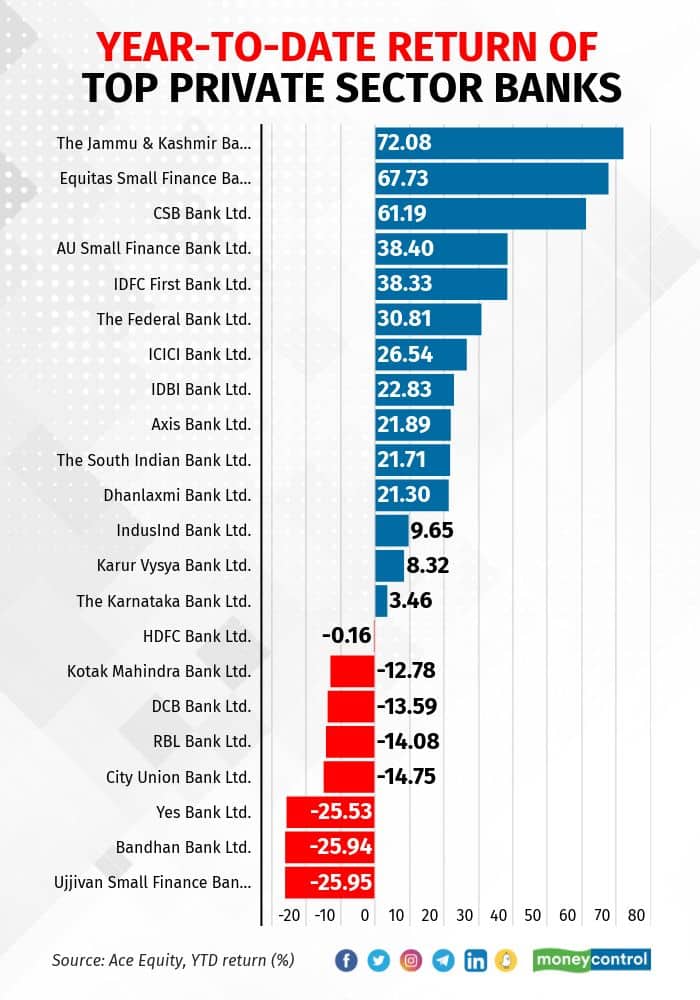 What led to the underperformance

The second coronavirus wave is the main reason why most banking stocks could not carry forward the healthy Q4FY21 numbers.

"The resurgence of the second wave of COVID-19 over April-June 2021 resulted in lockdowns in many states, which kept the business environment muted. Thus, momentum in recovery gained over Q4FY21 was impacted, with the asset quality outlook deteriorating once again," Nitin Aggarwal, Banking Analyst–Institutional Equities, Motilal Oswal Financial Services, said.

Also read: Analysis | NPA woes continue for banks, NBFCs in Q1; will the next quarter be better?

Aggarwal expects slippages to remain high over the first half of FY22 especially in Q1FY22, resulting in an uptick in gross non-performing loan (GNPL) ratios. However, the impact is likely to be much lower when compared to the first wave, he said.

"The banking sector has underperformed owing to concerns of rising NPA due to the second wave. Moreover, the loan growth momentum has also been impacted as the economic activities again came (to) a standstill due to lockdown across states," Mishra said.

Some of the country’s large private sector banks such as HDFC Bank, ICICI Bank, Axis Bank and Kotak Mahindra Bank have released their June quarter scorecards.

The management commentary is optimistic and the road ahead looks better than the first half of the year. Analysts believe that the sector is on the cusp of a re-rating.

"Corporate loan pick up is yet to happen significantly. Large banks with bigger capital buffers and comprehensive sources of fee income will likely do better," said D’Souza.

Economic activity starting picking in June and business growth is expected to improve from the second half of FY22.

Aggarwal estimates loan growth at 9 percent for FY22 and 13 percent for FY23, while private banks may grow higher at 14 percent and 17 percent, respectively.

"While many banks have a high PCR and carry additional provision buffers, banks would be cautious about drawing down on these buffers given the uncertainty and worries of the third wave. Overall, FY22 is likely to be stable or better than FY21 and we thus believe that as this uncertainty subsides, we could see re-rating happening in the sector," said Aggarwal.

"With the recovering economy and caution about impending third-wave, private banks are expected to strengthen their positions by optimising their operations and sustaining their profitability. We expect the sector to do reasonably well. The only hindrance could be the third wave of the pandemic and the risk of bad loans in MSME and retail loans," said Balabhadruni.

Mishra of Religare Broking said NPA concerns are overstated and large private sector banks would be able to withstand the impact, thanks to adequate provisioning and a strong balance sheet.

Moreover, with the pace of vaccination picking up and receding cases, it would limit the impact on NPAs and also aid loan growth, Mishra said.

Disclaimer: The views and investment tips expressed by experts on Moneycontrol.com are their own and not those of the website or its management. Moneycontrol.com advises users to check with certified experts before taking any investment decisions.
Nishant Kumar
Tags: #markets #Nifty Private Bank #Stocks Views
first published: Jul 27, 2021 01:38 pm