The Rs 318-crore initial public offering (IPO) of Chemcon Speciality Chemicals has seen the 9th highest subscription in a decade, backed by response from across investors' categories.

The IPO has seen a massive 149.33 times subscription during September 21-23 as the portion set aside for non-institutional investors (NIIs) was subscribed 449.14 times, the highest subscription since January 2018.

The reserved portion of qualified institutional buyers was subscribed 113.54 times and retail 41.21 times.

"Specialty chemical stocks are among the street's favourite in last few years. We are expecting good returns in this sector and Chemcon might also surprise," Gaurav Garg, head of research at CapitalVia Global Research, told Moneycontrol.

Chemcon Speciality Chemicals is a manufacturer of specialised chemicals, such as HMDS (hexamethyldisilazane) and CMIC (chloromethyl isopropyl carbonate), which are predominantly used in the pharmaceuticals industry,  and contributed around 64 percent to its total revenue in FY20. 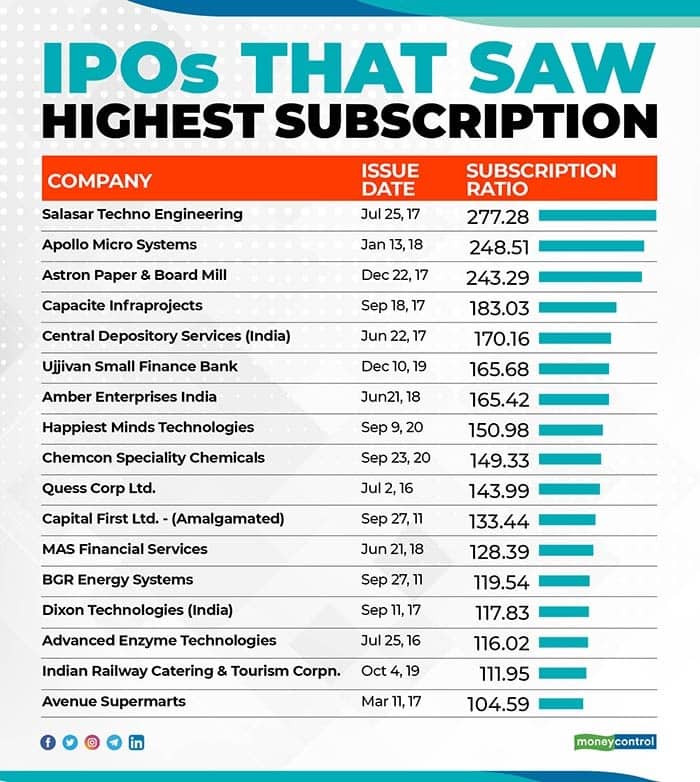 In fact, so far, every IPO, barring Angel Broking, has seen strong subscription. Angel Broking provides stock broking services and its IPO, which was subscribed 3.94 times, could have been impacted due to weakness in equity markets and higher pricing.

Ujjivan Small Finance Bank had seen a 165.68 times subscription in December 2019, while Amber Enterprises was subscribed 165.4 times in June 2018.