To say Happiest Minds Technologies' initial public offering was a hit on D-Street would be an understatement. The Rs 702-crore public issue was subscribed 150.98 times, making it the eighth biggest IPO of the last decade.

The IPO of the Mumbai-headquartered digital IT services provider was subscribed 351.5 times by non-institutional investors and 77.4 times by

Salasar Techno Engineering currently holds the spot for the most subscribed IPO of the last decade, notching 277.28 times subscription in its July 2017 issue, data shows.

The subscription figures indicate that with all said and done, big money always chases quality.

"Demand in primary markets is a function of what is on offer. Even during the lockdown, we have seen an insatiable appetite for quality Indian businesses – so many listed companies have raised capital via QIP, and were oversubscribed," Sameer Kaul, CEO & MD of TrustPlutus Wealth Managers (India) told Moneycontrol. 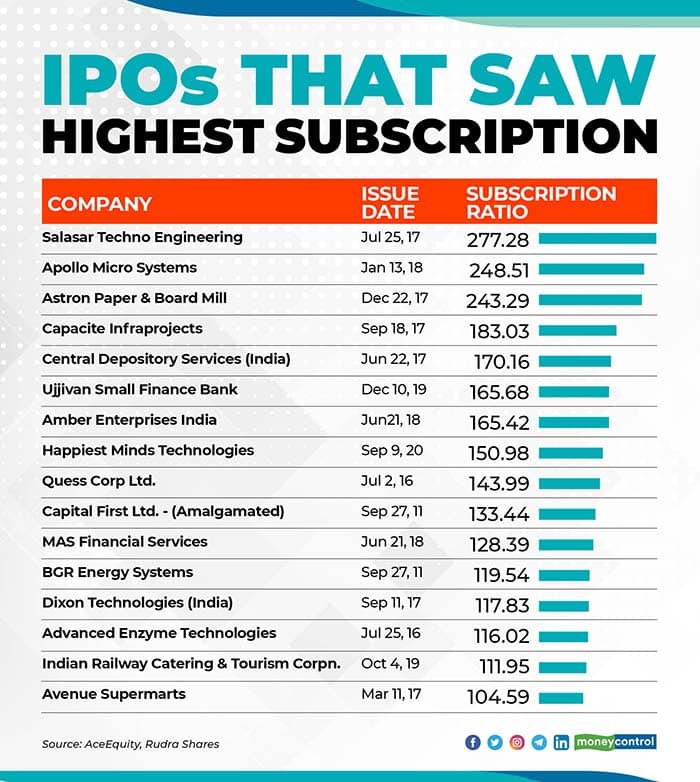 Ten-year data shows, 15 mainboard IPOs witnessed a subscription of more than 100 times. (Note: Capital First which was merged with IDFC Bank is not considered in this copy, though IPO was subscribed 133.44 times in September 2011.)

Even though not many companies have come out with their IPOs this year, experts expect things to change soon on the D-Street as multiple media reports anticipate 6-10 public issues by December 2020. CAMS, Angel Broking, UTI AMC, LIC, NSE, Equitas Small Finance Bank, Gland Pharma are some of the IPOs the Street expects to see before 2020 ends.

"We do see capital market intensity and activity. The need for confidence capital - more than growth or opportunity capital (in most cases), will keep that market active. We also believe it's a good thing – and a very good way of moderating risks in the economy, and providing the firepower for economic expansion - when the time is right," Aditya Narain, Head of Research – Institutional Equities at Edelweiss Securities said.

"Primary capital markets activity also provides liquidity to investors and assets – and we believe that is a good and necessary thing, for value realization and benchmarking, and for growth," he added.
Disclaimer: The views and investment tips expressed by investment experts on Moneycontrol.com are their own and not that of the website or its management. Moneycontrol.com advises users to check with certified experts before taking any investment decisions.