Life Insurance Corporation of India shares have been priced at 949 rupees each, the state-run firm said in a prospectus filed Friday. LIC shares were offered at 902 rupees to 949 rupees apiece. Trading on the stock exchange is due to begin May 17.

Pedestrians pass a Life Insurance Corp. of India branch office in Mumbai, India, on Thursday, Jan. 20, 2022. LIC, India's largest insurer, plans to file the draft IPO prospectus in the final week of January, which will provide the embedded value as well as the number of shares for sale, according to people with knowledge of the matter. Photographer: Dhiraj Singh/Bloomberg

India raised 205.6 billion rupees ($2.7 billion) as its biggest ever initial public offering priced at the top of the range following strong demand from local investors and a last-minute dash by foreign funds.

Life Insurance Corporation of India shares have been priced at 949 rupees each, the state-run firm said in a prospectus filed Friday. LIC shares were offered at 902 rupees to 949 rupees apiece. Trading on the stock exchange is due to begin May 17. 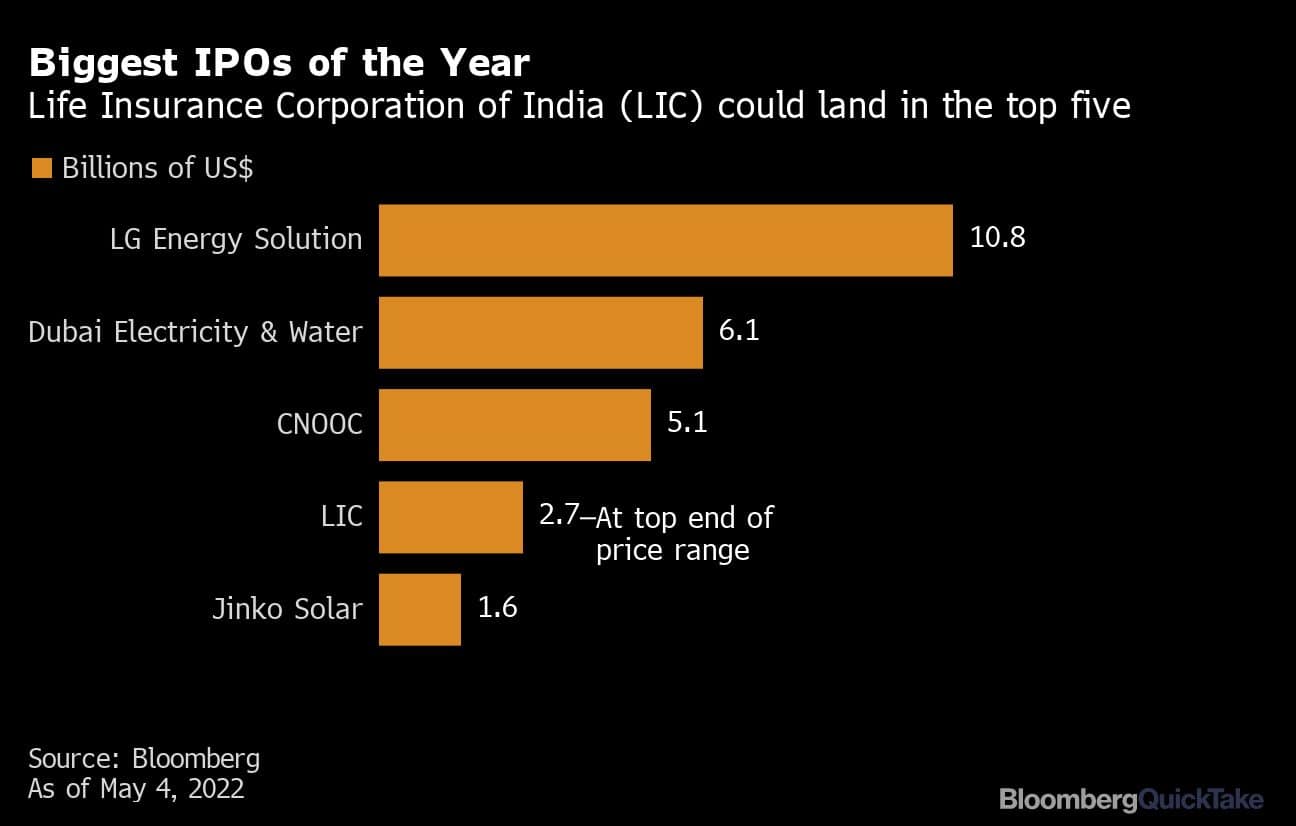 Dubbed India’s “Aramco moment” in reference to Gulf oil giant Saudi Arabian Oil Co.’s $29.4 billion listing in 2019 -- the world’s largest -- the float of LIC has ended up resembling the Aramco IPO not just in scale but in its reliance on domestic investors after some foreign buyers deemed it too expensive. Foreign institutional investors stepped up their bids for the sale in the last hours before the close of subscription this week, shunning currency risks and global market uncertainties.

Besides smashing India’s record as the country’s biggest IPO, LIC’s offering is also the world’s fourth-biggest this year, according to data compiled by Bloomberg. LIC’s debut comes at a time when capital-market activities have significantly slowed globally as the war in Ukraine stokes market volatility and saps investor appetite.

Shares of LIC are trading at a discount of about 30 rupees to its IPO price in the so-called gray market, traders told Bloomberg News. The expectation for a strong debut by LIC’s shares is waning as the demand in the unregulated market, where investors bet on listing day gains, has come down over the last few days.

Retail investors and LIC policyholders were among the most enthusiastic for the offering, thanks to the discounts they were offered. The portion reserved for them was fully taken up days before the offering was closed. The anchor portion of the IPO drew in sovereign funds from Norway and Singapore while other foreign investors picked up pace only on the last day.

Overall, the LIC offer was oversubscribed by nearly three times. The money will help the government bridge a budget deficit that’s expected to widen as commodity prices soar across the world.

For the banks working on the IPO, the share sale might not give them large fees but offers glory in the league table rankings, Bloomberg News has reported. The 10 banks on the IPO received a total 118 million rupees as fees, according to the prospectus, a fraction of what they could have typically pocketed for an offering of this size.