Vijayakumar will also be entitled to a base salary of $2 million, a performance-linked incentive of $2 million, and perquisites and other benefits amounting to $384,000 a year

HCL Technologies chief executive officer & managing director C Vijayakumar will get $31.5 million in stock options over five years in addition to an annual compensation of $4.38 million in salary, performance incentives and other benefits, making him one of the highest-paid IT CEOs.

This comes on the back of his elevation as the managing director effective July 20 when founder Shiv Nadar stepped down from HCL. Vijayakumar earned $4.13 million (Rs 30.60 crore) for the year ended March 2021, down 74 percent from the previous year, the FY21 annual report said.

As the CEO & MD, Vijayakumar will be eligible for long-term incentives (LTI), which includes stock options and restricted stock options, to the tune of about $31.5 million for the financial years ending March 2022 till March 2026.

While Vijayakumar's salary came down in the quarter and is more likely to be one of the largest paid IT CEOs in coming quarters, his counterpart in Wipro was the highest paid in FY21. 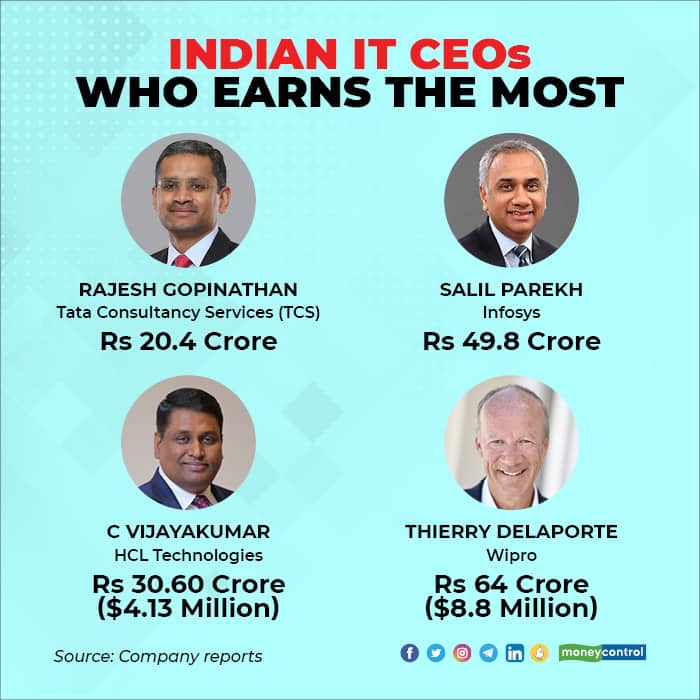 Wipro’s CEO & MD Thierry Delaporte drew Rs 64 crore ($8.8 million) for FY21, making him the highest paid CEO in IT for FY21, compared to his peers in Infosys, HCL Tech and TCS.

Compensation of Delaporte, who took charge as the CEO in July 2020, included a salary of Rs 9.6 crore, commission of Rs 11.2 crore, Rs 5.5 crore as long-term compensation and Rs 37.81 crore as other income, according to a regulatory filing.

When Delaporte was announced as CEO & MD, he was offered an annual package of Rs 37.9 crore (4.45 million euros), stock compensation and other benefits.

Bengaluru-based rival Infosys’ CEO & MD Salil Parekh's salary increased 45 percent to Rs 49.68 crore in FY21, with more than half coming from exercise of the stock options.